Liliana Carrillo fled her apartment in Reseda, Calif., stole a car in Bakersfield and was arrested near Ponderosa after her three children were found dead that morning

TULARE COUNTY – A woman suspected of killing her three children in Los Angeles was caught in Tulare County on Saturday.

Tulare County Sheriff’s Deputies arrested 30-year-old Liliana Carrillo of Reseda, Calif. on April 10, ending a statewide manhunt for the woman the Los Angeles Police Department says is the sole suspect in the case. Ashley Schwarm, spokesperson for the Tulare County Sheriff’s Department, said deputies found the car she had stolen earlier that day near Ponderosa and took her into custody. When deputies found her, Schwarm said Carrillo had minor injuries, including injuries to her wrist, and she was taken to a local hospital where she underwent surgery and was in stable condition, as of press time.

“It is still unclear where those injuries occurred,” Schwarm said.

The children, a 3-year-old, a 2-year-old and a 6-month-old, were found by their grandmother in their apartment in the 8000 block of Reseda Boulevard at about 9:30 a.m. on April 10, according to LAPD. Los Angeles Fire Department personnel pronounced all three children dead at the scene. The cause of death is still under investigation but various news outlets have reported the children were stabbed to death. Anyone with information on this case is asked to call LAPD’s Robbery Homicide Division by calling 213-486-6890 or emailing [email protected].

A little over an hour later, LAPD said it received a report Carrillo was involved in a carjacking in the Bakersfield area and was driving a stolen Toyota pickup. Carrillo continued driving north and eventually made her way to Tulare County where she was arrested in Ponderosa, a mountain community located 43 miles east of Porterville, around 1 p.m. LAPD did not comment on why Carrillo was driving in that direction, but her ex-boyfriend, and father of the three children, Erik Denton, lives in Porterville, according to court records.

Denton filed for custody of the children in Tulare County Superior Court on March 1 and filed a temporary emergency order for custody on March 4 stating Carrillo was “experiencing a psychotic episode and experiencing paranoia and hallucinations.” In his declaration, Denton said Carrillo showed signs of postpartum depression following the birth of their second child and her condition had worsened since abruptly quitting therapy last year. Denton requested a mental evaluation and claimed Carrillo was “erratic and unstable” and had taken the children from their home in Porterville in the middle of the night on Feb. 25 and refused to tell him where they were. He suspected she had taken them to be close to family in either Los Angeles, where her mother resides, or Mexico, where her extended family lives.

“I am fearful for the safety of our children,” Denton wrote in the filing.

On March 12, Carrillo filed a temporary restraining order against Denton in Los Angeles County Superior Court prohibiting him from harassing, threatening or violent behavior. According to Denton’s statement, Carrillo had accused him of being part of a “pedophile ring” when their daughter was complaining of groin pains, even though she was there when the daughter fell and injured her groin during a family outing at a park. Two days later, Denton said Carrillo took their daughter for an examination at Valley Presbyterian in Los Angeles which determined her injuries were due to the fall.

On March 26, Carrillo and Denton appeared before Judge Gary Johnson at the South County Justice Center in Porterville and agreed on a shared custody, with the children alternating weekends beginning March 28. The couple was due back in court on April 14 to set a date for recommended counseling and additional custody hearings.

“I am very concerned about my partner … and want to get her the help she needs to recover from this mental break and to become stable,” Denton wrote in his declaration. “I want her interactions with the children to be safe and healthy.”

A GoFundMe.com page titled “No Words” has been set up for Erik Denton, Carrillo’s ex-boyfriend and the father of the three children—Joanna, 3, Terry, 2, and Sierra, just six months old.

“It is more than words to describe his loss and the help that Erik needs at this time,” the page reads. 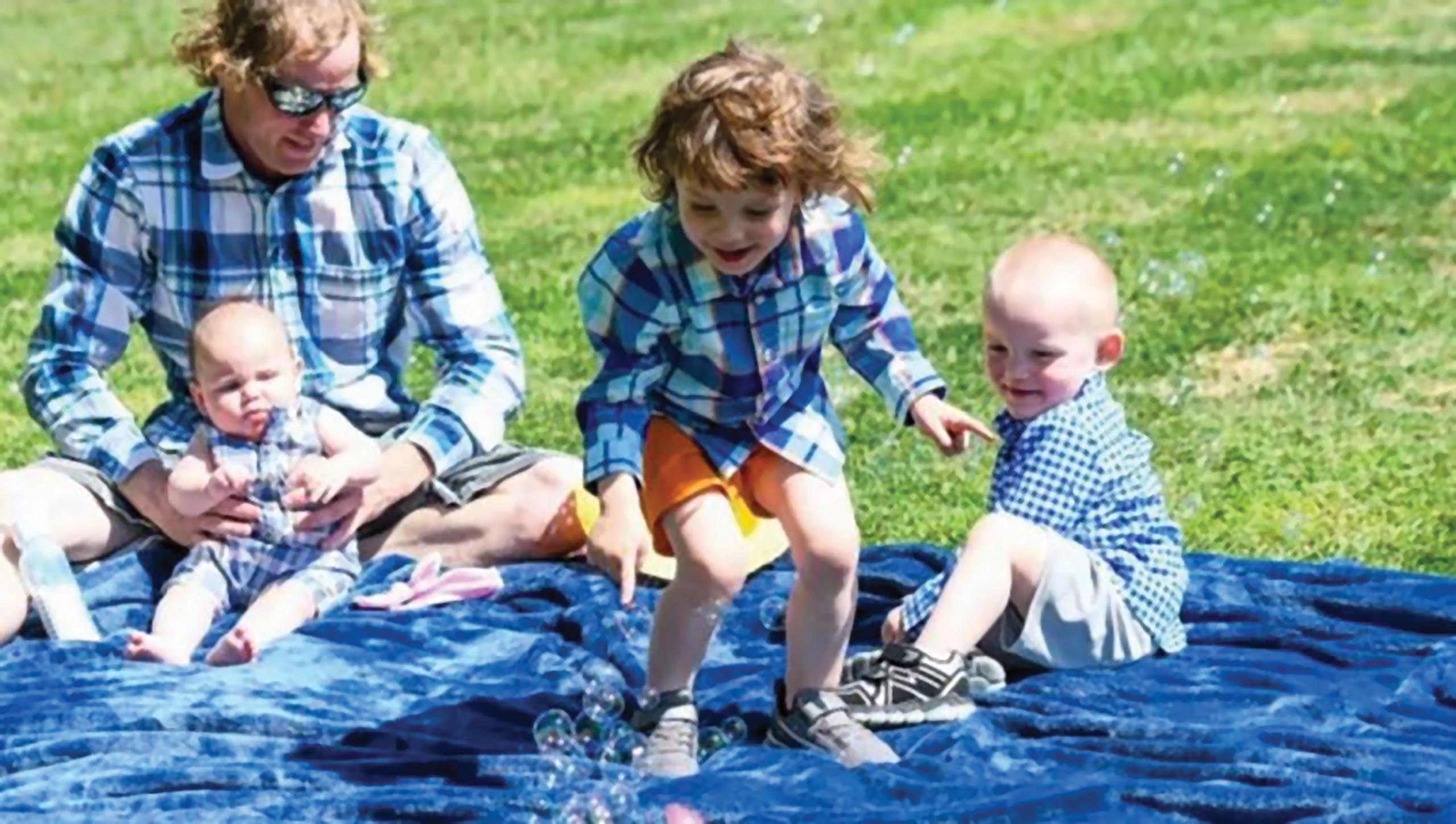 Father Erik Denton is photographed playing with his three children before their death on April 10.Photo courtesy of GoFundMe.com