TULARE – Lighthouse Rescue Mission is set to open the doors to it’s 16-bed pilot pocket courtyard community next month in Tulare, providing shelter and connections to social services to the city’s homeless population.

Dave Clevenger, contracted executive for faith-based nonprofit Lighthouse Rescue Mission, said pending the final electrical work, they hope to have the four factory-built homes at 214 S. H St. ready for guests by May 1. Due to the nature of the COVID-centric Community Development Block Grant (CDBG) funding used to complete the project, homeless needing to quarantine will take priority at the community while the pandemic persists. Clevenger said the scope of the project extends much further.

“The bread and butter of what the Lighthouse staff does is coordinate the connection to other services like mental health or job training and placement,” Clevenger said. “That’s really the Lighthouse model, to care for the basic needs and case manage to connect people to other integrated services.” 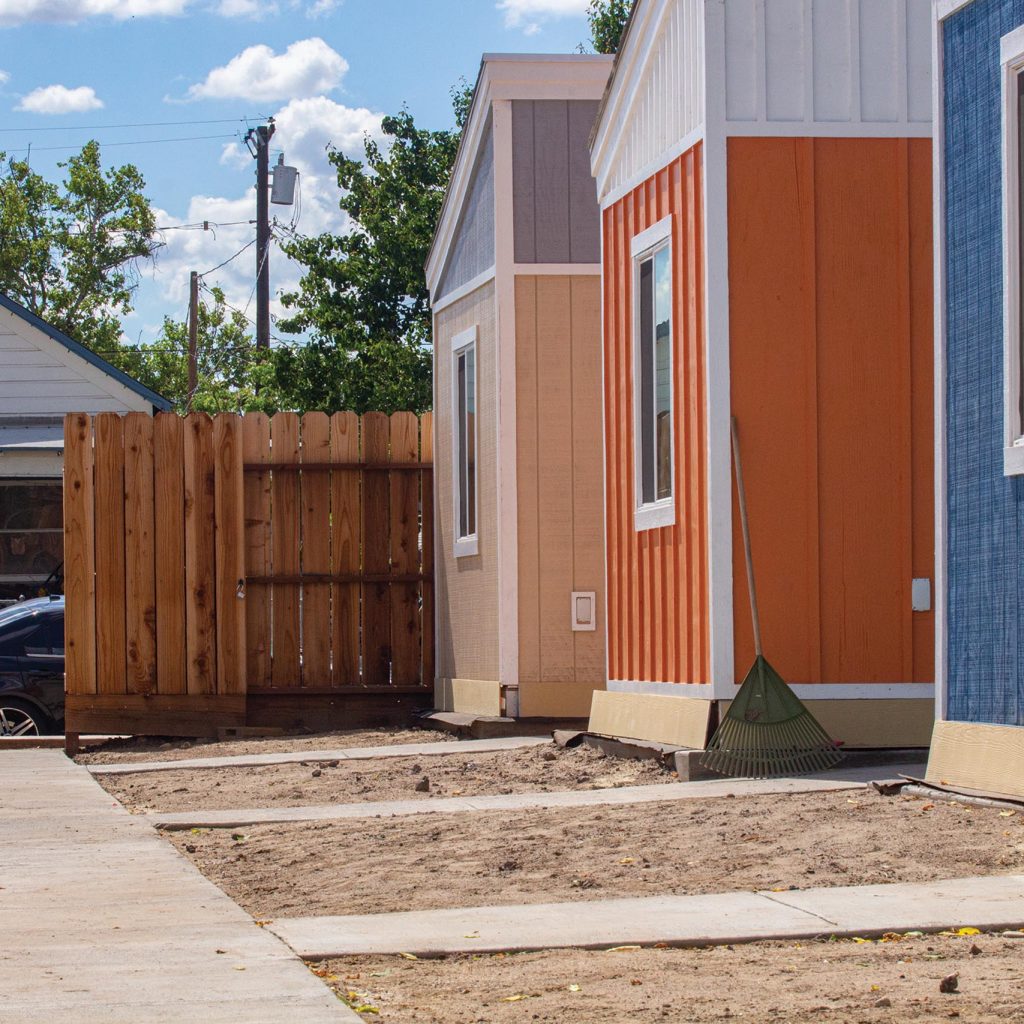 Four pocket courtyard units are nearly ready to open at the beginning of May to help house just some of Tulare’s homeless. The Lighthouse Rescue Mission’s prefabricated homes will shelter 16 of the city’s more than 200 homeless.Ben Irwin

Besides quarantining, the pocket courtyard community will operate much like an emergency shelter, Clevenger said, staffed by Lighthouse where people can come in at 6 p.m., have a safe place to spend the night, access to hygiene services and then depart in the morning.

“People who are partaking of those services become a little community that supports one another, self-police and really start becoming a part of something that’s pretty good for them, ” Clevenger said. “In a smaller type of setting, you can encourage ownership and buy-in.”

The project had originally included the construction of a low-barrier shelter at 444 E. Cross Ave. capable of having enough beds to house all 205 of Tulare’s unsheltered population, according to the 2020 point in time survey, but was nixed due to its location at the edge of downtown. At the time, John Harmon, director of Tulare’s Downtown Association, said there were “major concerns” the 200 people located at the site will go out into downtown and that the city would get complaints of “defecation and urination.”

Part of the scope of the project between the city and Lighthouse Rescue Mission was to provide enough beds to shelter the entirety of the city’s homeless population, giving Tulare Police officers a tool to clear out homeless encampments and unsheltered people from city parks by giving them three options: 1. Leave the area; 2. Go to a shelter; or 3. Go to jail.

The push for this comes twofold: Firstly, a 2018 appellate court decision barring cities from forcing homeless people out of sleeping in public parks if the city doesn’t have enough low-barrier shelter beds for unsheltered residents. A 9th Circuit Court of Appeals’ ruling in September stated prosecuting someone for sleeping in a public place is cruel and unusual punishment, a violation of that person’s 8th Amendment rights, unless the enforcing agency provides a low-barrier shelter for homeless people to sleep and they refuse to seek shelter there. The term low-barrier refers to a shelter that does not have any restrictions to enter, meaning it does not require those seeking shelter to be sober, participate in a religious program or separate families based on gender.

Secondly, after repeated pleas from the city, CalTrans cleared out homeless encampments along Highway 99 at the end of February, only after a homeless person was struck and killed by passing cars Feb. 4 when he attempted to cross the freeway near the overpass at Prosperity Avenue. About 75 homeless people—previously camping within state jurisdiction along Highway 99—now had nowhere to go, prompting immediate discussion amongst the city council for a low-barrier shelter.

While Lighthouse’s 16-bed pocket courtyard community is a drop in the bucket toward Tulare reaching the 205 beds it currently needs—not including Lighthouse’s upcoming 16-beds, Tulare has 63 shelter beds between various agencies—Clevenger said the project at 214 S. H St. is ideally the first of many in Tulare, signaling a shift in strategy to meet the city’s goal of housing all of its homeless. Tulare city code also allows for homeless shelters to be built in multi-family zones, streamlining the process with the city.

To those who may say temporary housing is not a solution to homelessness, Clevenger would agree. He said this is a different approach, in that this community currently holds the bedroom sides of larger two-bedroom, one bathroom factory-built homes, and the intention is to convert the units into permanent housing.

“Down the road as funding allows, marrying up the kitchen and bath unit, it becomes permanent [housing],” Clevenger said. “We’re spending money on stuff that is permanent.”