Jimmy Reed from Exeter was convicted of attempted murder among other crimes, faces 25-years-to-life

VISALIA – Law and baseball are alike in one way, three strikes and you’re out. And one Exeter man is definitely out after almost murdering his ex-girlfriend last year. 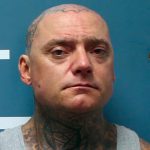 According to the DA’s office, after midnight on May 21, 2020 at a gas station on Lovers Lane in Visalia, the adult female victim was putting gas in her vehicle. Reed, her ex-boyfriend, approached her and demanded a ride. The victim began driving with the intent of taking Reed to the Visalia Police Department. During an argument about past instances of domestic violence and relationships, Reed verbally threatened the victim, punched her multiple times in the head, put her in a headlock, and choked her with both hands. The victim was eventually able to stop the car, but lost consciousness. Reed then fled the vehicle. The victim’s injuries included a swollen forehead, bruised cheeks, a concussion, and bleeding from her ears. Reed was taken into custody by Exeter police officers a few days later.