Goshen woman violates parole by driving under the influence

Ana Gomez violated her parole that was set after hitting and killing a motorcyclist while texting by driving under the influence last October, sentenced two years in state prison

VISALIA – The only thing worse than drinking and driving might be texting and driving. And one Goshen woman managed to get caught doing both.

Late last month the Tulare County District Attorney’s Office announced Ana Gomez, 27, was sentenced to two years in state prison for violating her terms of probation that were set after a 2019 vehicular manslaughter conviction. 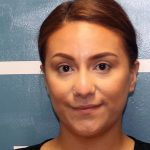 Gomez was arrested for DUI on Oct. 19, 2020 by the Visalia Police Department with a blood alcohol content of .21. On March 5 Gomez pleaded no contest to misdemeanor DUI and sentenced to time served. But that conviction was in violation of her probation for a prior crime where the jury convicted her in late 2018 of one felony county of vehicular manslaughter with gross negligence, and one infraction count of driving while using an electronic communication device.

In that case Gomez was driving north on Road 52 toward Goshen around midday on Oct. 28, 2015. She ran the stop sign at Avenue 304, pulling her vehicle directly into the path of an oncoming motorcycle operated by the 65-year-old victim. Gomez failed to break and took no evasive action, resulting in a collision with the victim. Gomez and her vehicle came to a stop in a field around 170 feet away from the impact. The victim was pronounced dead at the scene. Cell phone records showed Gomez sent text messages in the minutes leading up to the collision. There was no evidence of alcohol.

At Gomez’s sentencing for the collision in January 2019, prosecutors argued for the maximum sentence of six years in state prison; however, the Court instead sentenced Gomez to a two year suspended prison sentence that would be imposed if she violated the terms of her three-year probation period. Her sentence also included her serving 365 days in custody with no credits. Gomez admitted to the violation of probation on March 5, 2021.