TOKYO, JAPAN – From valedictorian to Olympic boxer, Richard Torrez Jr. has amassed quite the resume since graduating from Mission Oak High School in 2017. Last Wednesday he left from an Olympic Training site in Colorado Springs en route to Japan as he prepares to compete in the 2020 Summer Olympics.

The nine boxers that will represent Team USA are completing their final training camp in Miyazaki, Japan, where they will be joined by other international teams until July 17. From there, they will travel to Tokyo to enter the Athlete Village and prepare for the boxing competition, which is scheduled for Saturday, July 23 through Sunday, August 8.

Torrez Jr. is the second boxer from the Central Valley to represent Team USA in the past three Olympic Games. Torrez Jr., will also be the first U.S. boxer to compete in the men’s super-heavyweight division at the Olympics since 2012.

Torrez Jr.’s trek to Tokyo began in Tulare, with roots that run much deeper than the 22-year-old. He grew up training in an old shack which was converted to a boxing gym, now known as the Tulare Athletic Boxing Club. It was opened in 1945 by his grandfather Manuel Torrez who was a former Southwestern United States Golden Gloves champion.

The boxing legacy was passed down to, Richard Torrez Sr., an Olympic trialist in 1984, who ranked as high as fourth in the world as an amateur with a career record of 226-36-4. He then passed the boxing genes down to his son who fell in love with the sport as a young preschooler.

At around four years old, Torrez Jr. recalls walking into the family gym while his dad was in the ring sparring. He entered just in time to witness an image that is forever painted in his memory.

“He hit a guy with one of the meanest liver shots I’ve ever seen to this day. The guy goes down, he’s kicking on the floor, and I thought ‘man that was amazing,’” Torrez Jr. said. “I [saw] my dad had the ability to do that and so I wanted to do that one day. And that’s when my dad became my role model in the ring.”

Not too long after, Torrez Jr. had his first sparring match with a friend. The boxing gloves came up to their elbows on their tiny preschool arms. It was all in fun as they pushed each other around the ring for a bit, and there began his journey to superstardom.

From there, his growth as a boxer happened at an accelerated pace. His first competition was at 8 years old and it only took two years for him to win his first national tournament. Since then, he’s gone on to win nine national championships, a Golden Gloves national title in 2017 and a bronze at the Pan-American Games in 2019. He’s dominated as an amateur with a record of 151-10-0 and will likely turn professional after the Olympics are complete. He is now the No. 3 ranked super heavyweight boxer in the world and has not lost a match in the United States in eight years. 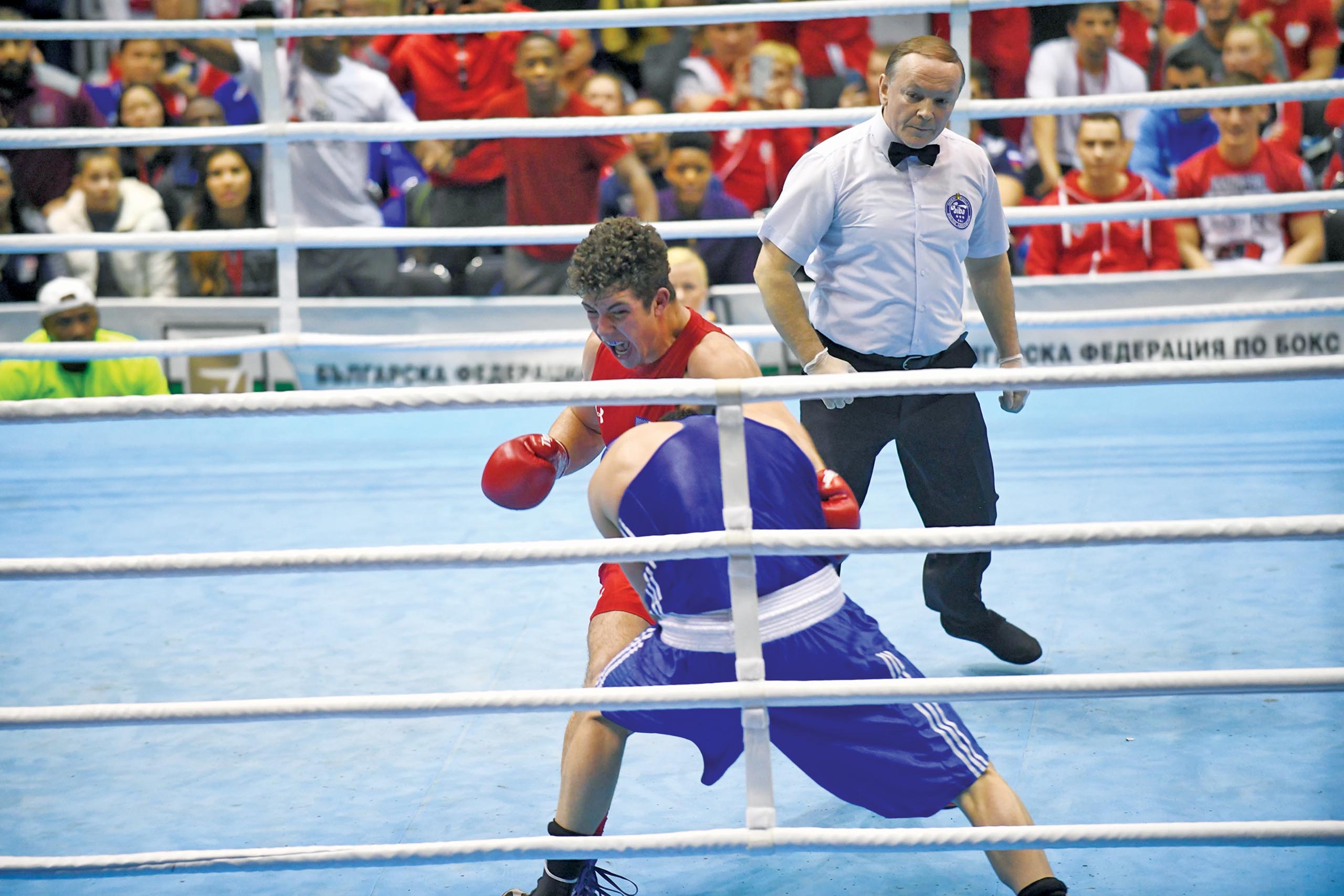 Mission Oak grad Richard Torrez Jr. fights in Bulgaria in 2019, and will represent the USA in the super-heavyweight division in the 2020 Summer Olympics in Tokyo.Photo by Bob Skinner.

Excelling in and out of the classroom

Torrez Jr.’s first time competing overseas was during his sophomore year at Mission Oak when he went to St. Petersburg, Russia for the Junior World Championships. He was also a three-sport athlete, competing on the football, basketball and track teams until junior year when he began devoting most of his energy toward boxing.

Despite spending an increasing amount of time at the Olympic Training Center in Colorado, Torrez Jr. refused to slack off on his school work. Both of his parents are educators as his father is the Dean of Students at Mission Oak while his mother, Kimberly Torrez, teaches at Porterville College. They instilled the importance of getting good grades and consequently he went on to graduate as class valedictorian, despite missing nearly a third of his senior year.

He would leave for a couple of weeks at a time and would be placed on a short-term independent study plan so he wouldn’t be marked as absent. During the times when he was home in Tulare, his daily routine was an early indicator of the success to come.

Torrez Jr. would wake up early for a morning run before a full day of school. He was president of the school’s chess club and they would normally meet at lunch. When playing other sports, he would practice with that team right after school before heading to boxing training. He was also a member of the robotics team which replaced practice time after school when he wasn’t playing another sport. From his boxing training he would go home to eat dinner, study, finish homework and then do it all again the next day.

To add to the rigor of his senior year curriculum, he also took AP calculus and AP physics. He missed prom to go fight at the Golden Gloves national tournament, which he won. He credits the Mission Oak staff for their willingness to work around his hectic schedule. If it weren’t for their help, he doesn’t know if he would have received his diploma.

“The saying is that you can have three things in high school: social life, good academics, or athletics. I chose my academics and athletics,” Torrez Jr. said. “I didn’t go out and party, I didn’t do any of that stuff. Everyone kind of knew that you could talk to Richard at school but afterwards he’s always busy.”

The dedication to his craft was rewarded with a spot on Team USA as he relocated to the Olympic Training Center about a month after graduating from Mission Oak. Torrez Jr. deems his Central Valley roots will continue to play a major role in his success.

“Everyone on the team says they’re built differently, well I tell them that I’m grown differently because I’m from Tulare,” he said. “One of the biggest things the Olympics has been able to do for me is validate the sacrifices that I made. I’m going to the Olympics to get that gold medal to prove that it was worth it.”

According to the Olympics official website, the last American to win in the weight class at the Olympic Games was Tyrell Biggs back in Los Angeles in 1984—the same year Richard Torrez Sr. fought at trials and the year the super heavyweight division debuted in the Olympic programme.