National park closures are announced as the KNP Complex and Windy Fires continue to grow; government and nonprofit services offer help to elderly residents and animals

TULARE COUNTY – A slew of evacuation warnings and orders came from the Tulare County Sheriff’s Office, last week. The KNP Complex Fire and Windy Fire have put people, property and the most renowned parts of the Sequoia National Forest at risk.

At least by Monday morning several communities were put under evacuation orders by Sheriff Mike Boudreaux. Last week only a portion of Three Rivers was under a warning, but later on residents on Mineral King Drive up to the Sequoia National Park boundary, including associated structures along both sides of Highway 198 to the park boundary, were forced to pick up and move. 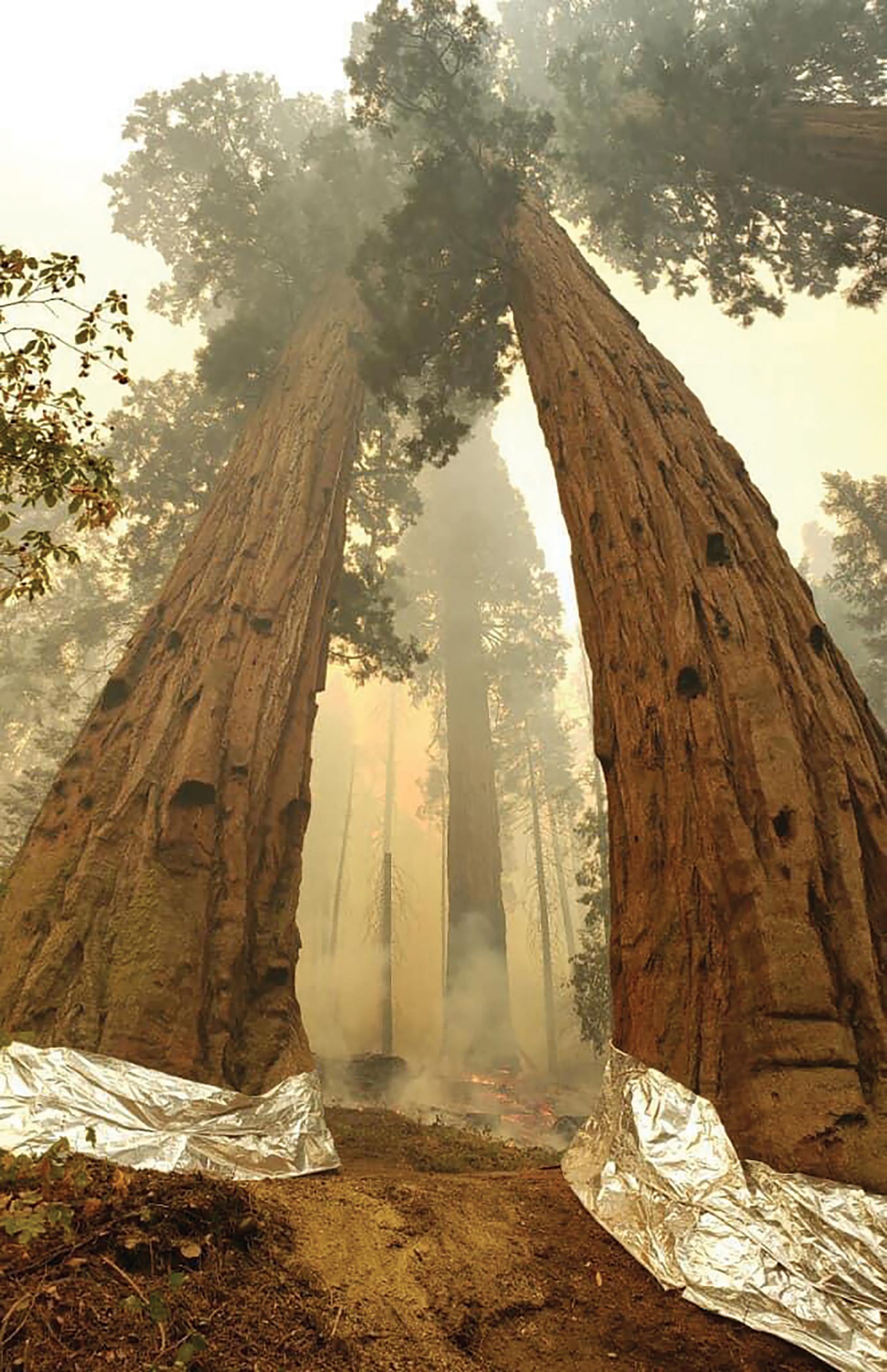 Two fires in the Sequoia National Forest have threatened the forest’s renowned trees, and flooded Tulare County with smoke.Submitted photo

Seniors who live in the affected areas are encouraged to call Community Services Employment Training (CSET) for help. They announced last week that they are providing a hotline for seniors 60 years old, or older, and are under evacuation orders. The service is intended to help those seniors who need assistance leaving their homes whether they are by themselves or with their pets. The phone number is 1-800-321-2462 seven days a week from 4 a.m. to 10 p.m.

All campgrounds in Kings Canyon National Park were closed effective Sept. 18 through at least Sept. 25. This includes all campgrounds in Cedar Grove and Grant Grove. All concession services closed Sept. 19, including lodging, retail, and food service. Access into wilderness from Kings Canyon trailheads is no longer permitted.

Trail closures were also announced last week, and are expected to go through the end of the year. According to Forest Supervisor Teresa Benson, the KNP Complex Fire is actively burning toward the Hume Lake Ranger District, creating a very dangerous situation for the public.

“Fire hazards identified that pose a threat to public safety includes tree snags, staubs, root holes, created by roots burning beneath the surface of the soil,” Forest Supervisor Benson described. “Roads and trail systems within the closure area are narrow and hazardous, with few routes for evacuation. Roads are also being used for staging heavy equipment, such as dozers and other suppression equipment, and fire suppression activities make the area unsafe for the public.”

Many residents in Three Rivers and other foothill communities being affected by the KNP Complex Fire own large animals. Tulare County Animal Services announced last week they have activated multiple animal shelters for large and domestic animals.

If residents with animals are under an evacuation order they are instructed to call the Tulare County Animal Shelter manager, Cassandra Heffington. Otherwise, for the residents who can take their animals with them, the shelter reminds owners to bring enough food, water, leashes and bedding. Plus, any medication the animal might need.

The Windy Fire, that was also started by lightning strikes on Sept. 9, began burning on the Tule River Indian Reservation. By Sunday, Sept. 12, the fire had crossed onto the Sequoia National Forest. As of Monday the fire consumed 23,801 acres and is 4% contained.

Last Thursday, Sept. 16 the Sheriff’s Office put out an evacuation order for the communities of Johnson dale and nearby Camp Whitsett. The evacuation order includes from M107 at Dome Rock, east to Lloyd Meadow at Lower Peppermint Road, south to M99 at Sherman Pass Road, west to M107 and M50.

The Sheriff also issued an evacuation warning for the communities of Ponderosa and Quaking Aspen. The area of warning includes M107 at Dome Rock, north to Highway 190/M90 at North Road, east to Route 21S05, at Needles Trail, south to Lloyd Meadow at Lower Peppermint Road. Residents who took the initiative to leave were told to, avoid all road closures and use Highway 190 to Porterville.

Over the weekend the Sheriff issued other evacuation warnings for the communities of Camp Nelson, Pierpoint, Coy Flat, Mountain Aire, Cedar Slope, Alpine Village, Rogers Camp and Sequoia Crest. The temporary evacuation point for those in the path of the Windy Fire is at Porterville College.

According to Benson, the Windy Fire continues to show aggressive behavior posing a threat to human life, property and natural resources.

“The fire is continuing to spread across the forest posing an extreme threat to public and firefighter safety,” Benson explained. “Over the last week many of our mountain communities are once again threatened, with evacuations and evacuation warnings in place. I am increasing the Windy Fire Closure Area in light of the fire’s recent expansion and anticipated growth. The roads and trails within the Windy Fire Closure Area are also closed. I am also closing Cherry Hill and Big Meadow Roads to prevent hunters from getting trapped behind closed gates.”