CLOVIS – Nurses, farm working families, community leaders and concerned residents held a news conference at the Department of Pesticide Regulation Central Regional Office in Clovis last week to protest the use of 13 pesticides in Tulare and Fresno counties liked to childhood cancers.

Organized by the Tulare County Coalition Advocating for Pesticide Safety (TC-CAPS) and the Central California Environmental Justice Network (CCEJN), those who gathered on Oct. 26 called on state and local governments to restrict the use of these pesticides, and post warnings online before they and other hazardous pesticides are used. 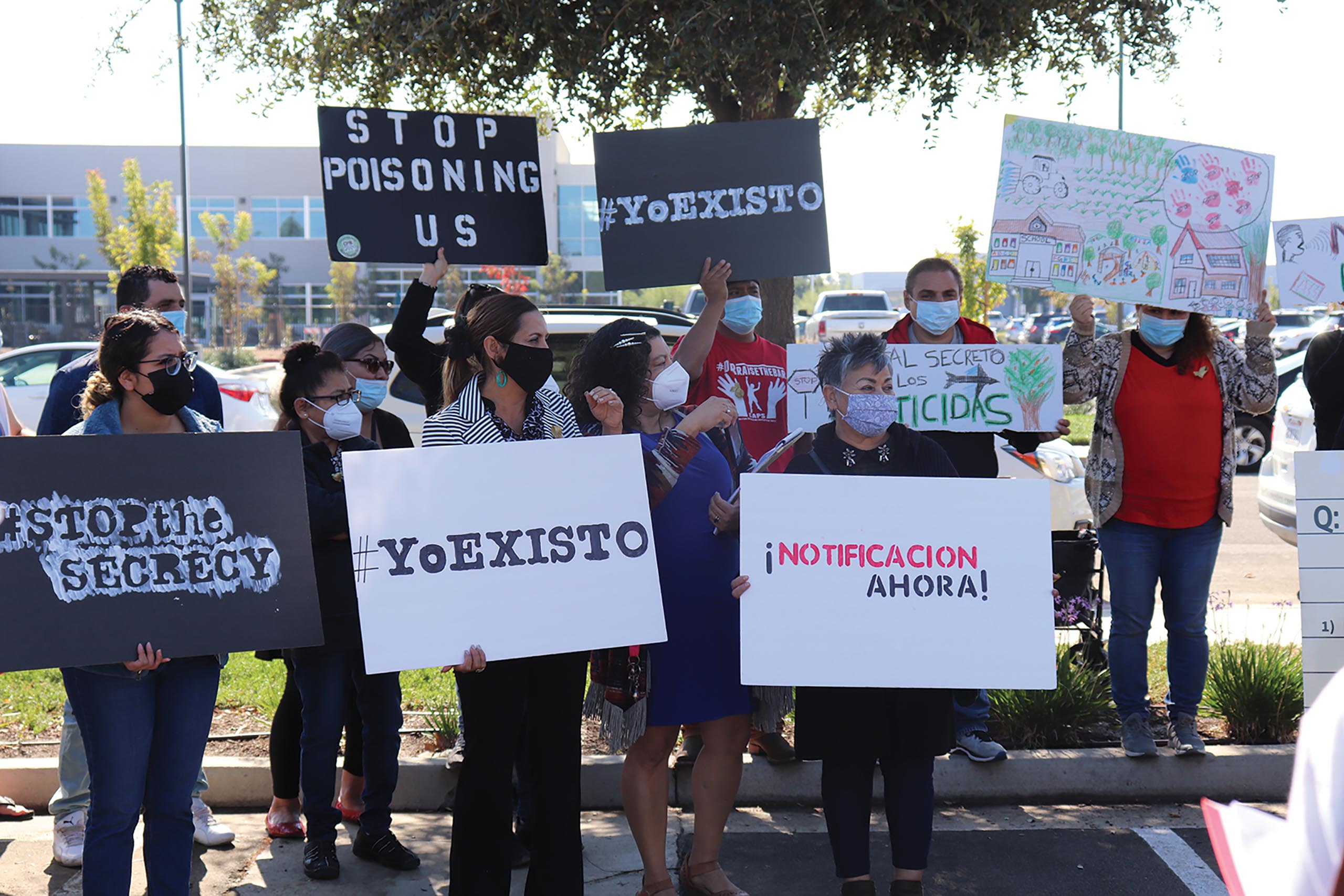 Activists, farmworkers and community members protest outside the Department of Pesticide Regulation Central Regional Office in Clovis, protesting the use of pesticides that have may increase childhood cancers.Submitted Photos

The report reveals regular use of 12 out of 13 pesticides in the Fresno-Tulare area identified in two recent studies by UCLA as being linked to early childhood cancers, such as leukemia. The studies found that these pesticides increase risk of a child developing specific forms of cancers ranging from 1.60 times (or 60% increased chance) to 3.38 times (or 238% elevated risk), if their mothers lived within 2.5 miles of the pesticide application while pregnant. More than 28 countries have banned or not approved 10 of the 13 pesticides.

“California and our County Ag Commissioners have to do a better job in protecting our communities from pesticide harms,” TC-CAPS organizer Maria Reyes said. “We can’t keep using these pesticides that drift for miles and can cause cancer in our children.”

Leia Bailey, outreach director for the Department of Pesticide Regulation (DPR), said the state agency evaluates all pesticides for potential human health and environmental risks before they can be legally registered for sale and use in the state. Even after registering a product, DPR continually reevaluates the products by reviewing new studies, like those mentioned above, to decide if they require greater restrictions across the state, special permits by county or if they must be banned altogether. So far, cancer risks have already been assessed for three chemicals (propanil, linuron and metam-sodium) and DPR is in the process of evaluating chlorathalonil for cancer risks. Bailey confirmed DPR has not registered any products containing two of the chemicals (triforine and 2,6-dinitroanilies) mentioned in the studies.

“DPR’s review of [the UCLA studies] is ongoing and will inform potential mitigation efforts,” Bailey said.

In the past, these reviews have led DPR to increase restrictions on five of the chemicals (diuron, propanil, bromacil, metam-sodium and paraquat dichloride) on the list. The designation adds additional layers of oversight at both the state and county level such as requiring farmers to file a notice of intent (NOI) within 24 hours of spraying or applying the pesticide, buffer zones larger than required by the label and special permits for sensitive areas. Non-toxic pesticides do not require any type of notification.

DPR has also banned pesticides based on these reviews, such as chlorpyrifos in 2020, and worked to find sustainable alternatives to harmful pesticides. Last summer, DPR issued a report titled “Towards Safer and More Sustainable Alternatives to Chlorpyrifos: An Action Plan for California,” which included a five-year action plan and five key recommendations. The five key recommendations are: outreach to growers, building institutional capacity, regulatory improvements, research priorities, and a roadmap for future work. Four of the recommendations were for increasing outreach, reinvesting in University of California’s division of Agricultural and Natural Resources, increased funding for DPR staffing, and expand research and development of beneficial insects and other more sustainable practices. The fifth recommendation led to the creation of Sustainable Pest Management Work Group which launched in March to continue to develop alternatives to chlorpyrifos and other pesticides.

Angel Garcia, organizing director for Californians For Pesticide Regulation (CPR), and founder of TC CAPS, said scientific links between pesticide exposure and childhood cancer have been mounting for decades. What is new about these recent studies is that they are California-specific, provide correlations of individual pesticides to specific childhood cancer sub-types, and establish links to in utero exposure over a long distance—up to 2.5 miles from the pregnant mother’s residence.

Current state regulations do not address exposure from applications at such distances and therefore do not account for normal pesticide drift. DPR contends substantial off-site drift or any drift that causes harm or damage is already illegal. Bailey said each pesticide is evaluated for drift prior to be registered in the state and product labeling and permitting restrictions are implemented prior to the sale or use of the chemical in California.

Certified applicators are the primary group responsible for drift management. Any illegal applications of pesticides could leave the applicator and farmer open to fines. County Ag Commissioners are required to investigate all reported pesticide drift and may fine pest control licensees up to $5,000 or suspend their license for up to three days. Growers found to have knowingly treated a commodity or crop with a pesticide that had been stolen or illegally obtained are subject to a fine of $10,000 plus one-half the value of the crop to which the illegally obtained pesticide was applied.

Only one of the chemicals (metam-sodium) listed in the study is considered a fumigant, which have a greater potential for drift than other pesticides. That’s why some fumigants are applied in the form of a gas and injected into the soil instead of being released above ground. Others are applied with sprinklers and under tarps. Bailey said DPR implemented a fumigant notification regulation in 2018 restricting pesticide use within a quarter mile of California public schools and child care sites within 36 hours of the start of a school day.

Also in 2018, DPR, with assistance from the California Air Resources Board (CARB) and the Santa Barbara County Agricultural Commissioner’s Office, monitored drift of 31 pesticides and five pesticide breakdown products in eight agricultural communities. The monitoring stations are in Shafter (Kern County), Santa Maria and Cuyama (Santa Barbara County), Watsonville (Santa Cruz County) and Chualar (Monterey County), Lindsay (Tulare County), Oxnard (Ventura County) and San Joaquin (Fresno County). In all, the results show that just 1.3% of the more than 12,000 samples exceeded screening levels or regulatory targets for drift. Of the 36 pesticides and products, 17 were only detected at trace levels and eight were not detected at all. Tulare County had the lowest levels of drift with just 0.5% of samples exceeding standards. DPR launched its air monitoring network in 2011 and the location of the monitoring stations varies year to year.

At last Tuesday’s event, CPR’s report entitled “There’s something in the air, and it causes childhood cancer” noted while average annual acreage treated with pesticides linked to childhood brain cancers decreased in Fresno and Tulare Counties, acreage increased in both counties for pesticides associated with childhood leukemia, in the years since the period covered by the UCLA studies.

Use of pesticides linked to childhood cancers disproportionately impacts Hispanic, or Latinx, areas of the San Joaquin Valley, including Fresno and Tulare Counties. Fresno and Tulare are two of the 11 majority Latinx counties in California. The use of pesticides linked to childhood cancer exceeds that of the California counties with the smallest proportional Latinx populations (under 24%) by 2.2 times or 220% in Tulare and 10 times or 1,000% in Fresno County, when compared by pounds of applied pesticides per county resident. More total pounds of the 13 childhood cancer-linked pesticides were used in Fresno County alone in 2019 than the combined total applied in the 25 counties with Latinx populations under 24%.

“Look at where the pesticides linked to childhood cancers are used: overwhelmingly Latinx communities. It’s clear that California and our County Ag Commissioners are not living up to the ‘fair treatment’ standard of Environmental Justice,” CCEJN organizer Lorena Sanpedro said, citing the statement on DPR’s website: “Fair treatment means that no one group of people, including racial, ethnic, or socioeconomic groups, should be disproportionately impacted by pesticides.”

In light of the report’s findings, the group called for greater protections and transparency for Fresno and Tulare County residents, including public web-posting of upcoming pesticide applications, increased restrictions on pesticides linked to childhood cancers, and 2.5-mile buffer zones around schools, hospitals, and other sensitive sites, reflecting the distances pesticides are known to drift.

DPR is in the process of developing a statewide pesticide application notification system, funded by $10 million included in the state’s 2020-2021 budget. The goal is to provide the public with transparent and equitable access to information about the application of pesticides occurring around them, in advance of the applications.

DPR releases an annual Pesticide Use Report and online database, the California Pesticide Information Portal, to provide information on pesticide applications that occurred throughout the state. The new notification system would build on this by providing the public access to information on pesticide applications in advance of application. This will, in turn, provide an opportunity for people to make their own decisions about any additional precautions they may want to take to protect their health.

“Our goal is to increase transparency and provide equitable access to information about pesticide applications,” acting DPR director Julie Henderson said. “This will provide an opportunity for the public to make their own decisions about additional health precautions they want to take to protect themselves and their families. We believe this is also an opportunity to strengthen the engagement between DPR, County Agricultural Commissioners and the communities we serve.”

DPR will conduct the second of two webinars on Nov. 3 to provide an opportunity for the public to submit feedback on the design and development of the notification system. The webinar will be held on the DPR’s website, www.cdpr.ca.gov, from 9 to 11:30 a.m. in English with simultaneous Spanish interpretation. The input gathered through this webinar series, in addition to focus group discussions conducted in August 2021 with community members, regulatory agencies, growers, and regulated industries, will inform DPR’s design and development of the system. DPR also plans to conduct workshops in early 2022 with the anticipation of launching the system in 2023 or 2024. For more information on the webinar, visit www.cdpr.ca.gov.

In addition to statewide notification system, advocates cite reform proposals at the federal level and in Europe as examples of health protective frameworks that California could adopt. The proposed federal bill “Protect America’s Children from Toxic Pesticides Act” would end indefinite delays in pesticide review, require emergency review of pesticides banned in other nations, end abuse of emergency exemptions, cancel use of organophosphates, neonicotinoids and paraquat, and end state preemption of local pesticide ordinances.

The “Farm to Fork” strategy proposed by the European Union would reduce overall pesticide use and hazardous pesticide use by 50% by 2030 and require 25% of agricultural land be in organic production by 2030.