TULARE COUNTY – After the fourth of four redistricting hearings on Nov. 9, the Tulare County Board of Supervisors selected their own tailored version of a new district map.

The map was a form of Fresno City Council assistant Jose Verduzco’s map, which was originally a community submitted map analyzed and recommended by the citizen advisory commission on redistricting.

The board made their decision after public outreach, community engagement and 14 advisory commission meetings in which the county and advisory commission analyzed and considered 52 supervisorial district maps in just about six weeks after the delayed 2020 census data was released Sept. 29. The board will adopt the final ordinance at either the Dec. 7 or Dec. 14 meetings.

Almost all of the socially and politically fueled public comment at the Nov. 9 hearing was for maps that did not make the final cut. Exeter residents and a self-proclaimed conservative who is “extremely pro-life” showed up to support the Wells map—described by attorney Maggie Melo to be “status quo,” inadequate districts with predominantly non-latino representation in a county that is 65% Latino. Other country residents who felt the commission and the board had not listened their Latino constituents from disadvantaged communities also said their piece during the meeting. 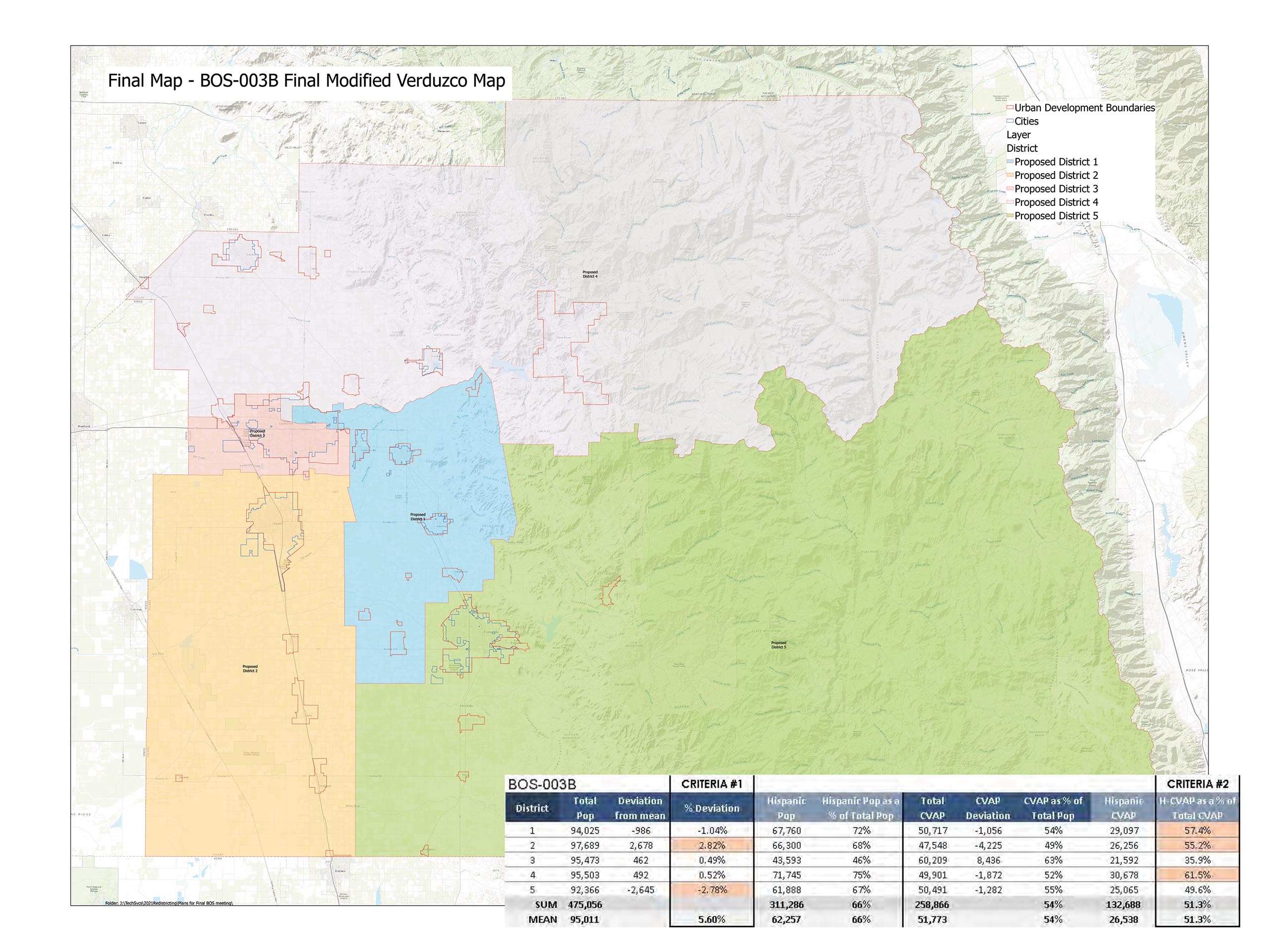 The Verduzco map was the basis on which the final map was drawn on, but as Supervisor Dennis Townsend said, by the time the final map was approved, the board had tweaked it with community suggestions and ideas from other maps that didn’t make the cut.

“We’re putting names on them, but by the time we’re through with them, it’s just going to be a community input map,” Townsend said. “From everything we’ve received, we’re going to morph it into one.”

The county’s redistricting process followed eight criteria in order of importance and precedence (i.e. if there is a conflict between criteria one and five, criteria one takes priority):

Tulare is kept whole in District 2, as was a hot topic of conversation in the discussion by the Dolores Huerta Foundation. The Equity Coalition map, split the predominantly white, wealthier northeastern part of Tulare into District 3 with western Visalia and the poorer, more diverse southwestern Tulare was to remain in District 2, with its unincorporated neighbors Pixley, Tipton, Allensworth and Earlimart. The proposed split was to give voting power to the poorer, more rural communities to elect a candidate of choice, who have historically been outvoted by their wealthier counterparts in northeastern Tulare.

Attorney John Sarsfield, whose partner Melo previously threatened a lawsuit if the Equity Coalition map was not selected, said the board’s final selection is “good enough.”

“The standard for a lawsuit [with] what they’ve drawn, it barely passes, but it passes,” Sarsfield said. “We had hoped that the Equity [Coalition] map would be chosen, but the final version of what they came up with is acceptable.”