For the second time this year, the Visalia Police Department is being sued for ordering a K-9 to bite the face of a mentally disabled man while he is being restrained by officers

VISALIA – The Visalia Police Department has been sued a second time this year for police brutality by a K-9 against a mentally disabled adult.

The lawsuit, filed in federal court on Nov. 30, claims the four officers involved in the incident violated a schizophrenic man’s civil rights when they set a K-9 loose on him while his arms were being held behind his back by officers, who then delayed getting him medical care after the dog bit his face and neck. He is also suing the department and police chief for a history of K-9 maulings as a result of deficiencies in its policies, practices and training.

“In particular, the city of Visalia, through Chief Salazar and the Visalia Police Department, has a custom and practice of unleashing K-9 dogs to tear into the flesh of defenseless citizens,” the lawsuit states. “The city of Visalia has been made aware of the deficiencies in its training but has not rectified the problem. This resulted in the unreasonable and excessive use of force against Mr. Gutierrez.” 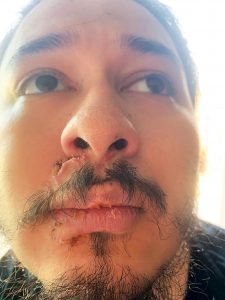 Jordan Gutierrez, 22, is the man who was bitten by the K-9 and his mother, Yajaida Keys, is filing the lawsuit on his behalf. Keys joined her attorney V. James DeSimone for a press conference calling for the department to investigate the officers for their actions, take corrective action to prevent future K-9 maulings and announce the lawsuit in front of the Tulare County Superior Court on Nov. 30. Keys is suing the department for unreasonable arrest and detention, false arrest, use of excessive force, denial of adequate medical care, a pattern of excessive force, violating the Americans with Disabilities Act, assault and battery, negligence and emotional distress. Keys said her son is now depressed, ashamed, and anxious about his appearance and does not want to be seen in public anymore to hide the scars on his neck and face.

According to the lawsuit, Gutierrez’s maltreatment continued when officers did not disclose his schizophrenia to doctors who treated him when they finally brought him to a local hospital. They then put him in jail where he was denied necessary medication and treatment and he was left for two days in just a hospital gown, underwear and shoes, as his mental health deteriorated.

“Jordan’s mother called 911 for help to have her son brought to a hospital,” DeSimone said. “Instead of rendering aid, they had a K-9 do their dirty work, attacking the helpless Jordan Gutierrez as he was being held securely by two Visalia Police officers.”

“Based on our investigation, we contend that the Visalia police department has a policy and practice of using its K-9s to torture mentally ill individuals who are perceived as vulnerable,” DeSimone added.

After she was unable to convince her son to the go the hospital, Keys called VPD at 5 p.m. on Oct. 20, 2020 for emergency assistance to take her son to the hospital for mental health treatment. According to the lawsuit, Keys advised the dispatcher her son was suffering from paranoid schizophrenia, he was unarmed and that she was following him on foot. Officers caught up with the mother and son in the 2000 block of Chelsea Court in Visalia, and Keys reiterated to officers her son’s condition, that he was unarmed and needed help.

In Keys’ own cell phone video of the incident, Lt. Ron Epp was the first to arrive on scene and immediately drew his taser. Keys pleads with Epp to put the weapon down but Epp said he had to protect himself.

“He threw trash cans at me. This is for my protection. This is for self defense,” Epp said. “If he comes at me, I will [tase him], but I am not advancing on him.”

Less than a minute later a second officer, Officer Austin Veteto, walked up and Keys said she recognizes him from previous calls where she had requested assistance and VPD took her son to the hospital for treatment without incident. “Please get back please. I know, we don’t want to tase him, OK,” Veteto said.

“They would come out, they wouldn’t even cuff him,” Keys said at the press conference. “They were in a police car, he would get in and escort him to the hospital.”

Epp and Veteto cornered Gutierrez into the exterior wall of the home as Officer Sean Schiebelhut and his K-9, Blazer, walk onto the scene.

“OK that is not necessary,” Keys says to the K-9 unit as they pass by.

The Epp and Veteto then positioned themselves on either side of Gutierrez, who did not move but continued to keep his cell phone to his ear. Keys pleaded with her son to put the phone down but he did not.

The two officers then grabbed Gutierrez’s arms and forced them behind him. Once his arms were pinned behind his back, Schiebelhut ordered his K-9 to attack Gutierrez with the officer yelling “Go! Go! Go! Go!” The dog bit Gutierrez in the hip and then the K-9 lunged at his face, cutting him on the neck, bottom lip and his nostril. Keys began running toward the officers screaming for them to stop.

After the attack, Gutierrez began mumbling inaudibly and cried as he walked past his mother in handcuffs.

“No! This is not what I asked for,” Keys told the officers.

As Epp walked past Gutierrez to the car, he threatened to arrest Keys for not backing up, which he had asked several times when he was the only officer on scene.

“Don’t you guys have any mental health training?” Keys asked.

“Are you telling me a schizophrenic can’t hurt police?” Schiebelhut said to Keys.

Officer Aaron Stocker attempted to speak with Keys after the incident and get information about why she called police in the first place before the video ends.

The lawsuit claims Gutierrez was left bleeding in the back of the police car for a half hour and the police did not call an ambulance. After 30 minutes, the officers transported Gutierrez to the hospital. After being treated for his injuries, officers booked Gutierrez into the county jail where he was held for two days wearing nothing but his medical gown, underwear and shoes. The lawsuit further states VPD did not provide Gutierrez with any medication or treatment for his mental illness while he was being held in custody.

“Instead, the actions and omissions of the Visalia Police Department exacerbated Mr. Gutierrez’s mental health condition, left him physically and emotionally injured, and inflicted extreme emotional distress on his mother,” the complaint states. 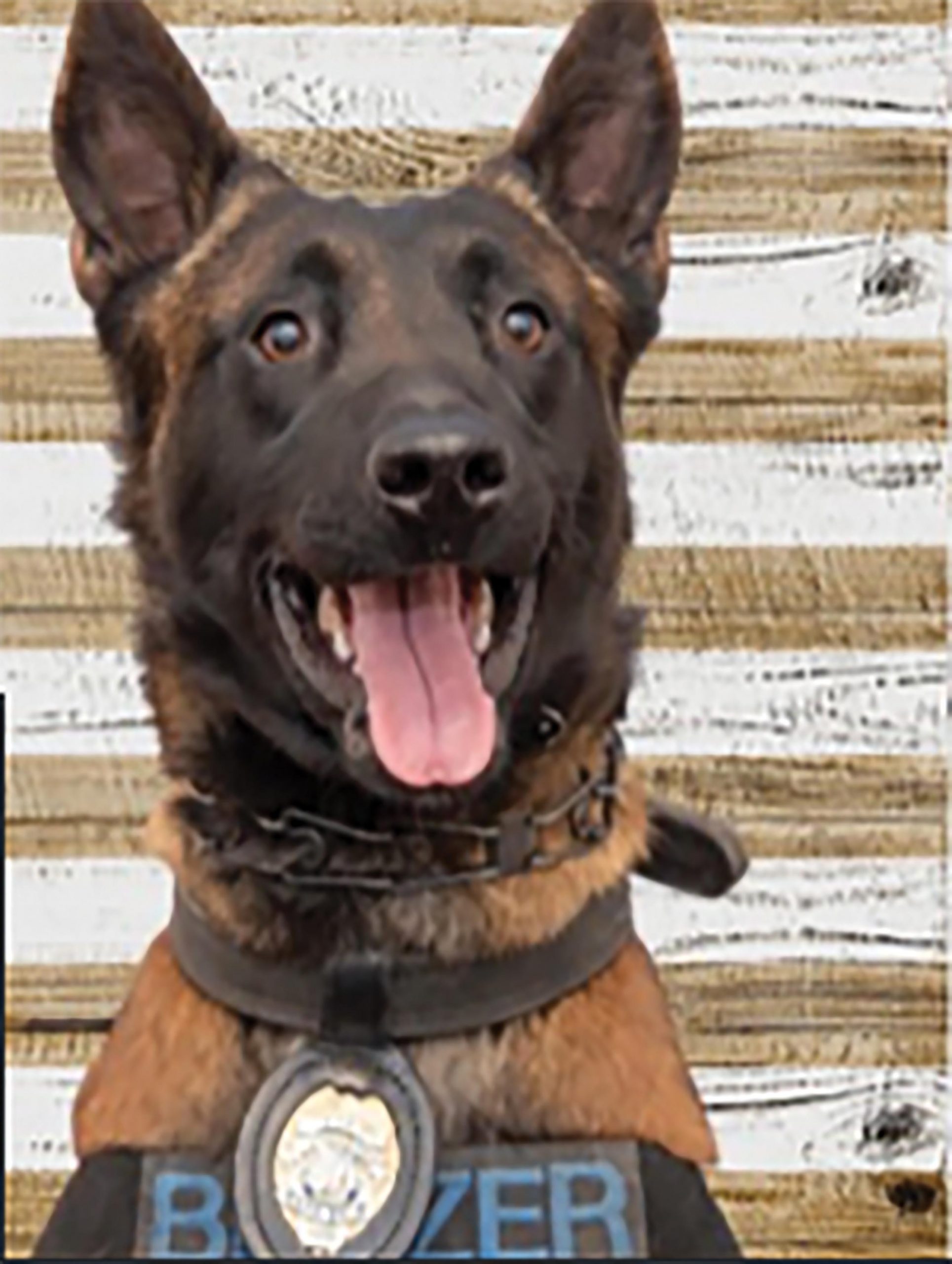 The K-9 officer, Blazer, was used to bite at a schizophrenic Visalia man who was arrested last October. Blazer bit the man’s face leaving him severely scarred.Submitted photo

A history of violence

The civil rights lawsuit filed in U.S. District Court in Sacramento comes eight months after the city was sued for the unlawful arrest and injuries inflicted on a mentally disabled man who was walking through a shopping center parking lot across the street from his home.

In January 2020, Raymundo Rubio, 32, of Visalia was confronted by officers after receiving complaints of someone in the parking lot peering into cars. Rubio, who has been mentally disabled his entire life, followed the officers orders but questioned if he was being stopped because he was Hispanic. Eventually two officers grabbed Rubio’s hands and then released a K-9 from the patrol car, which viciously bites the man for more than a minute. As a result of the incident, the lawsuit claims Rubio suffered a traumatic brain injury, deep bite wounds to his back, torso, left hand and arm. He now suffers from depression, memory loss, heightened paranoia, headaches and other mental and emotional injuries, as well as physical scars, resulting from the attack. Both K-9s were Belgian Malanois which, according to the lawsuit, have one of the strongest bites among dogs, equal to 195 pounds per square inch of pressure, which is enough to break bone.

“There appears to be a pattern of using police dogs to viciously bite helpless individuals who are vulnerable,” DeSimone said at the Nov. 30 press conference.

DeSimone has sent a request to the Attorney General’s Office asking for an investigation into the Visalia Police Department and their use of police K-9s. In an Oct. 13, 2021 letter, DeSimone cited both excessive force lawsuits against VPD to state the department is well aware of the deficiencies in its policies, practices and training but have not taken any steps to remedy them. The letter asks the AG to use its authority to put a stop to it.

“Indeed, the attacks on Mr. Gutierrez and Mr. Rubio reflect a deeply flawed relationship between the police and the communities they are sworn to protect, as well as serious deficiencies in police officer training, police practices, and police department responses to incidents of excessive force,” the letter states. “The police violence resulting from these deficiencies is so foreseeable as to be intentional-and it is disproportionately inflicted upon people of color and people with disabilities.”

The Visalia Police Department has not released a statement on the incident, due to pending litigation, and said it is not releasing body cam videos or officer reports of the incident at this time.

“We have not received the complaint as of yet,” Sgt. Mike Short said.

Short, public information officer for the department, said VPD officers each receive a weeklong, 40-hour crisis intervention training including interactions with those with struggling with mental health issues. The classes are certified Peace Officer’s Standards and Training (POST) where officers learn from mental health care professionals about what they do and how they interact with mental health patients.

“This is not required training but something extra the Visalia Police Department does,” Short said.

Short said VPD’s goal is for every officer and dispatcher to receive the training and about 89% of officers have been through the training. It is also a one-time training and is not required to be updated or refreshed but there are updates which may happen through other POST-approved trainings.

The department did make a statement shortly after the incident last year. Speaking to local media in front of the VPD’s headquarters, Sgt. Celeste Sanchez, then public information officer for the department, claimed Gutierrez held his hands in his pocket and the officers were not sure if he had a weapon on him.

Keys filed a formal complaint with the department in April which was rejected by the city. Instead, Keys was charged with obstructing officers at the scene. She also had to post bail for her son, $2,500, on which she is still making payments, and had to complete community service hours for her own charges, according to DeSimone.

Based out of Marina del Rey, Calif., DeSimone is a civil rights attorney who has dedicated his 35-year law career representing cases involving constitutional violations.