TULARE COUNTY – Longtime Tulare County Republican politician Connie Conway will throw her name in the hat to serve out the remainder of former Republican Congressman Devin Nunes’ term in the 22nd Congressional District.

Conway also served as the state’s executive director for the USDA Farm Service Agency under the Trump Administration in 2019. The 71-year-old valley politician told The Sun-Gazette she’s ready to be the caretaker of the 22nd District. 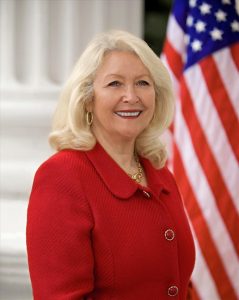 “I think I’m ready to step in on day one,” Conway said. “I understand the stage, I’ve got to get busy. I’m not waiting around for the next guy, the next term or the next election. I don’t work like that—when I’m in, I’m all in. The remainder of this term will be my total focus.”

Conway said she will not seek office in congress beyond the special election to serve out the remainder of Nunes’ term under the old district maps, where the 22nd is firmly red. She said the work of the 2020 California Citizens Redistricting Commission “decimated” Nunes’ old district. Under the new maps, the area has been split into three districts: the new 20th, 21st and 22nd districts.

A blue hue has been drawn where red once stood in much of Tulare County. Fresno Democrat Jim Costa, who currently represents the 16th Congressional District, has announced his intent to run for the new 21st District, an area that voted for Biden by over 21 points in 2020 that includes northern Visalia, Woodlake and Exeter. The new 22nd—the rest of Tulare, Porterville, the south county unincorporated areas, out to Avenal in Kings County and south into Kern County—voted for Biden by over 13 points in 2020.

House Minority Leader Kevin McCarthy is the likely representative for the new 20th District, which went for Trump in 2020 by over 25 points. The district puts southern Visalia and northeastern Tulare in with Clovis to the north, Naval Air Station Lemoore to the west, the Sequoia National Forest to the east and Bakersfield to the south.

“An old political observer such as myself, as much as it pains me, there is no other opportunity [for me],” Conway said about running for Congress in the 2022 November Election.

Conway said she’s a solid vote for her district and for McCarthy, but avoided answering if backing McCarthy meant backing his leading role in the “Big Lie,” his vote to decertify the 2020 Presidential Election and his efforts to boycott the Jan. 6 committee.

“Who knows what will happen with that in the next couple of months, it may or may not still be an issue,” Conway said. “I’m a solid Republican vote for my constituents.”

But at least on the surface, Conway does differ from her Republican predecessor and McCarthy in that she said a top priority is to always be available to communicate with her constituents. McCarthy hasn’t held a local town hall in over a decade. When his hometown of Tulare came knocking desperately wanting a Veterans Affairs clinic in town, Nunes was nowhere to be found. Conway said she’s different.

“I take everyone’s calls. I’m a good listener. I think many elected officials make a mistake when they don’t allow their constituents to call and vent. I’m fond of saying, ‘God gave us two ears and one mouth, and we should do twice the listening than we do talking,’” Conway said. “I would really like to take up the [VA] mantle…Tulare has a huge veteran presence. It’s a federal issue and I don’t want any of those federal issues to be dropped.”

The deadline for candidates to file signatures in lieu of filing fees was Jan. 20. Candidates will have until Feb. 10 to be certified by the Secretary of State. The primary for the 22nd Congressional District special election will be April 5. If no candidate receives more than 50% of the vote, a runoff election will take place June 7, the same day as the primaries for the election in November where voters will also be selecting their candidates of choice for the new congressional districts.