Residents share their views, both positive and negative, of plans for Planned Parenthood to move into larger Mooney Boulevard location

VISALIA – Planned Parenthood is no stranger to controversy at the national level but has operated in Visalia under the radar of most opponents for most of its 20-year history in town.

If the public comment period at the Feb. 7 Visalia City Council meeting is any indication, Visalia is split on the idea of Planned Parenthood moving from a non-descript, cramped office on Stevenson Street to a highly visible, larger location on Mooney Boulevard.

Lauren Babb, Vice President of Public Affairs for Planned Parenthood Mar Monte, was among those who attended the council meeting. In an interview after the meeting, Babb said Planned Parenthood has outgrown its current Visalia health center on Stevenson Street and needs a location like the one at 3221 S. Mooney Boulevard to double the clinic’s size to meet the needs of the community.

Due to space constraints, Babb said the current clinic is only open three days per week and can only see a handful of patients per day. The limited hours to Planned Parenthood, a preferred provider for many young women, was noted in a 2019 report on women’s health by the Kaiser Family Foundation, a nonprofit focusing on national health issues. “Planned Parenthood in Visalia was identified by multiple interviewees as the most comprehensive, and the only specialized provider of contraception; however, Planned Parenthood is only open three days a week with limited hours. These limitations are particularly exacerbated for residents in the outlying areas of the county who have to travel farther to get care.”

That’s not nearly enough hours to accommodate the needs of estimated 2,000 patients for Planned Parenthood in Visalia, a number based on 2018 populations so it has not been adjusted for population increases found in the 2020 Census.

If approved by the council, the new site would be extending its hours to six days per week and be able to see 40 patients per day. It would also allow Planned Parenthood to add primary and pediatric care to the list of services already offered such as sexual and reproductive health, women’s health, pregnancy tests, HIV screenings, gender affirming care and LGBTQ services as well as testing, treatment and vaccines for sexually transmitted diseases.

“Community members have shared that, even though there are providers in the area, most of them are not accepting new patients and so we have been able to open our doors to folks that are in those situations so they can get the care that they need when they need it,” Babb said. “And so our whole goal as a mission and organization is to keep people healthy. And our community is asking us to step up and provide care.”

Abortion, Right?
The Visalia Planning Commission approved the conditional use permit for the Planned Parenthood health care center on a 4-0 vote at its Dec. 13 meeting. The decision was appealed by a local developer fearing the controversial clinic would negatively impact businesses leasing space in the Sequoia Mall.

While the appeal of the clinic had been rescheduled to March 7, 10 people still approached the podium to share their thoughts both for and against the clinic.

Those who voiced their opposition for the clinic seemed unaware Planned Parenthood Mar Monte was already established in Visalia and what types of services they offered. They focused on Planned Parenthood’s national reputation as one of the largest providers of abortions in the United States, which is true, but not in Visalia. They called Planned Parenthood criminals, baby murderers, heinous and even devil worshippers.

“I would like to say that this town does not need a cloud of death over our community,” Jesse Gutierrez said. “And I would respectfully request that you deny this evil and satanic organization any right to enter into the city.” 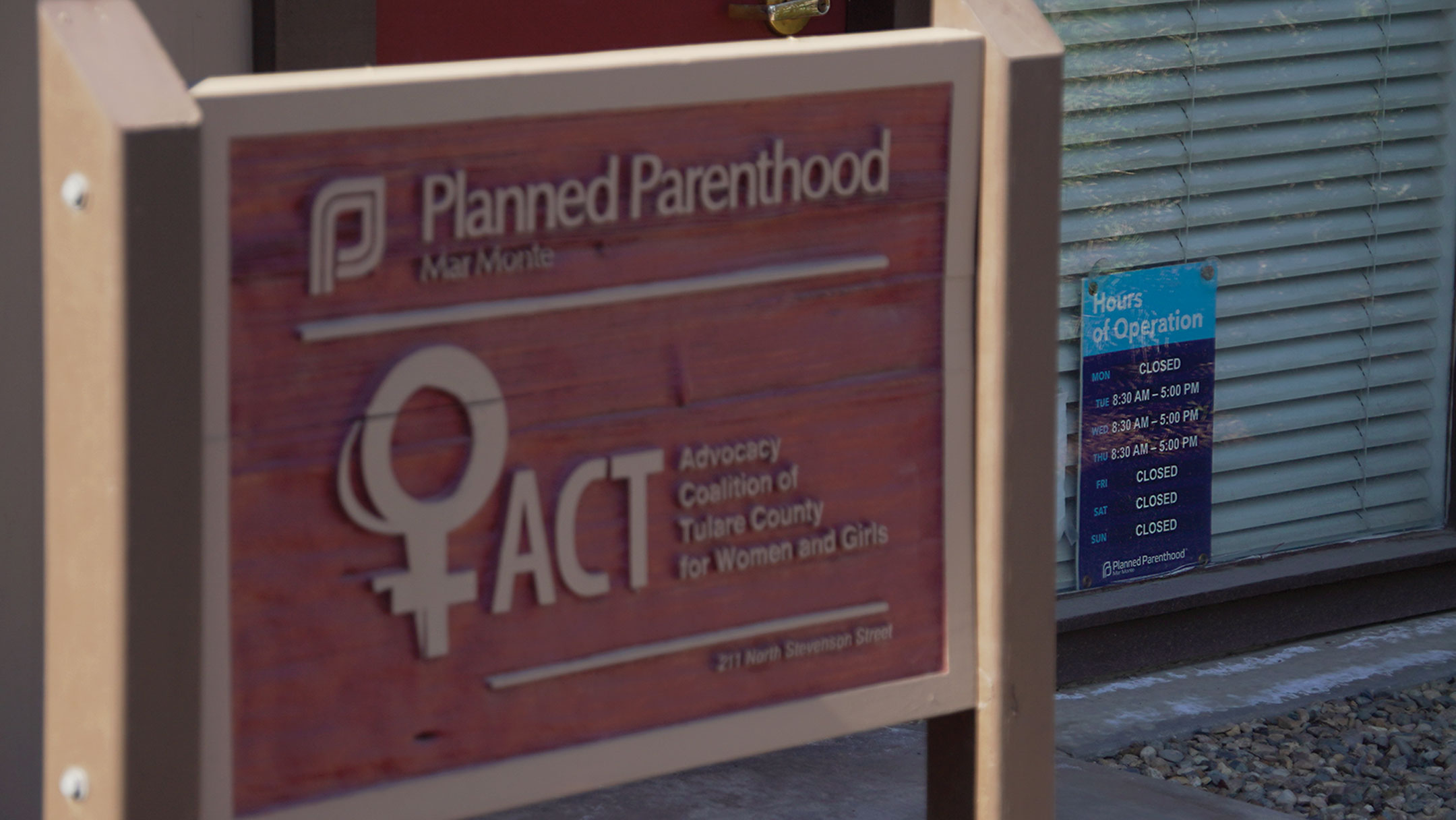 Lucia Vazquez, who works as a consultant for the Equal Voice Collaborative Network, was among those to speak in favor of a larger Planned Parenthood clinic on the grounds of expanding health care for everyone in Tulare County. The former Visalia Unified school board trustee said there is a dire need for more health care in Tulare County where the current patient to doctor ratio is 2,310 to 1. She shared a story about how she had to call three times to get an appointment to see her doctor and at one time was 34th on the waiting list for an appointment and then waited 45 minutes to get routine bloodwork. She said the shortage of physicians is one reason why more than a third of cancer diagnoses aren’t caught in earlier stages.

Tina Cobian said Planned Parenthood dismisses the child growing inside someone as “just a blob” and said “very little counsel” is given about alternatives to abortions. She said some women may move on quickly after their decision while others may “never get over that decision.”

She added, “we are very much against this clinic. It represents a heinous crime against the voiceless and more.”

As an organization, Planned Parenthood does provide abortions at many of its locations throughout the country. In fact, Planned Parenthood Mar Monte – the affiliate or chapter covering the Central Valley, Reno and a small portion of the Bay Area – recently expanded that service to Kern County, but does not offer it in Visalia. The Visalia clinic does offer abortion referrals at its current location and will continue to offer those services if the new location is approved but Babb said abortion procedures will not be offered at the site.

Even if Planned Parenthood referred someone for an abortion, there isn’t anywhere in Tulare County to get one. According to the Kaiser Family Foundation’s 2019 women’s health report on Tulare County: “There is no abortion provider in the county, so women must travel at least 50 miles to access these services. Religious views, transportation, and stigma prevent many women from seeking abortion services when they want them and prevent providers who otherwise would be willing to offer abortion care from providing those services.”

Dale Simmons, who has advocated for the clinic publicly in the local media, said she was a patient of Planned Parenthood Mar Monte in Fresno in the late 1980s when she was unable to afford traditional health care. Two-thirds of Planned Parenthood’s patients in Visalia are living at the federal poverty line, just $26,500 per year for a family of four. Many of those families live outside cities where there is more access to health care, as 30% of the county’s population lives in rural communities. She also pointed out free contraception is provided by their clinics, which makes up about 34% of all visits to Planned Parenthood locations nationwide.

“Planned Parenthood has a record of providing quality and affordable care for anyone regardless of income or zip code,” Simmons said. “Basically, it boils down to this – if you’re against abortion, you should be for a Planned Parenthood which provides free contraceptives to anyone.”

Women’s Health
Babb said there is a huge need for additional health care in Tulare County, echoing Simmons’ point on the number of people living below the poverty line, chlamydia rates are higher here than the state average, the fourth highest teen pregnancy rate in the state, and is a medically underserved area with a shortage of physicians.

“If you think about sexual reproductive health, and where the need is, Tulare County would fit that description very well,” Babb said.

Lisa Alvarado, a community activist, said her mother took her to Planned Parenthood when she was 15 years old because she had questions about sexuality and said it was difficult to approach the church with her questions, and when she did, she didn’t find answers. She said her mother’s upbringing had failed her when it came to sexual health education.

“She thought it would be wise to equip me with language medically accurate, non-biased reproductive care to make sure that if anybody would ever come close to me and my reproductive care, I’d have the information and the resources to take care of that,” Alvarado said.

Alvarado was inspired by the straight forward, medically accurate answers Planned Parenthood provided and decided to spend the rest of her high school years at El Diamante helping the organization to survey women in the community about what they needed in regards to sexual health education.

“I would be considered a criminal for asking some of the questions that you would be able to ask safely at Planned Parenthood Mar Monte,” Alvarado said.

She said some of the women who come to Planned Parenthood are raped, molested or abused and providing them with anatomically correct language is important in court cases against their perpetrators.

“Not all of us live in safe homes, and so I want you to remember that,” Alvarado said.

One speaker, Xavier Gutierrez, clarified those who oppose the clinic weren’t calling young women who get abortions criminals, they are calling the act of abortion “criminal murder and satanic worship.”

No Past Protests
The controversy over the clinic was initially kicked off by a letter from a local developer who owns the Sequoia Mall, which is adjacent to the clinic. Developer Dave Paynter, owner of Paynter Realty & Investments, Inc., stated in a letter to the Visalia Planning Commission he is concerned with patients at the medical office not only using up parking spaces for nearby retailers Bed Bath & Beyond and Marshalls, both of which he owns as part of the Sequoia Mall property, but also the possibility of protests.

“The medical clinic proposed is Planned Parenthood,” Paynter wrote in a Dec. 10 letter. “Our concern is that the typical demonstrations which occur outside of Planned Parenthood will also be significantly harmful to both Marshalls and Bed Bath & Beyond as well as to the current and future businesses located at the Sequoia Mall.”

Babb said since Planned Parenthood opened in Visalia on the College of the Sequoias campus in 2002, there have been no protests at its health care clinic. She said those who come to Planned Parenthood are likely people who shop at Marshalls, Bed Bath & Beyond and other stores at the mall and may frequent those stores more often if they go to doctor’s appointments across the parking lot.

“If they do have parking challenges or concerns, we want to work with them,” Babb said. “Because at the end of the day, we want to be good neighbors.”

Pamela Silva, who lives near the mall and the proposed clinic, said the idea of Planned Parenthood on a main street at the mall, where there are restaurants, movie theaters and stores like Hobby Lobby “is not wholesome” and that “it disgusts me to know that you guys think it’s okay to put it in that location.”

She also said the threat of protests mentioned in the appeal are real because she was planning on leading them if the council approves the location.

“It’s less than a mile away from my house and I will be, till my dying day, that I will say, right in front of that place, “You do not belong”,” she said. “And I will picket it and I will get people to picket it with me.”