VISALIA – Economic development has long been thought of in terms of recruiting, retaining and refinancing businesses to create more jobs. But instead of a call for “jobs, jobs, jobs” the cry is now for “workers, workers, workers.”

That was the message economist Chris Thornberg of Beacon Economics delivered in Visalia during the Tulare County Economic Development Corporation’s annual Sequoia Economic Summit on Feb. 18 at the Visalia Convention Center. Unemployment in Tulare County is back to pre-pandemic levels at about 9.5% but companies in nearly every sector are having trouble finding enough workers to fill jobs.

Thornberg said there are only three ways to increase the workforce in a region:

The first one might be an issue for the Valley until the federal government can come up with a more comprehensive plan for immigration. California is 44th among states for inbound migration and had a negative population growth for the first time in the state’s history.

Thornberg said there is opportunity in every type of economy and for Tulare County it’s about getting people to move here from other areas of the Valley, state and country to fill the job openings created by massive retirements, net migration and a declining birth rate. The share of the U.S. population living in retirement increased by a full percent during the pandemic and 3.1 million people left the workforce for retirement or other reasons.

Most of the population increases have come in the county’s incorporated cities while there has been population decreases in unincorporated areas as people move closer to amenities. Tulare County’s population has increased by 8% in the last decade but more people have moved out of the county rather than into it since 2008. The majority of people leaving California don’t have a college degree. 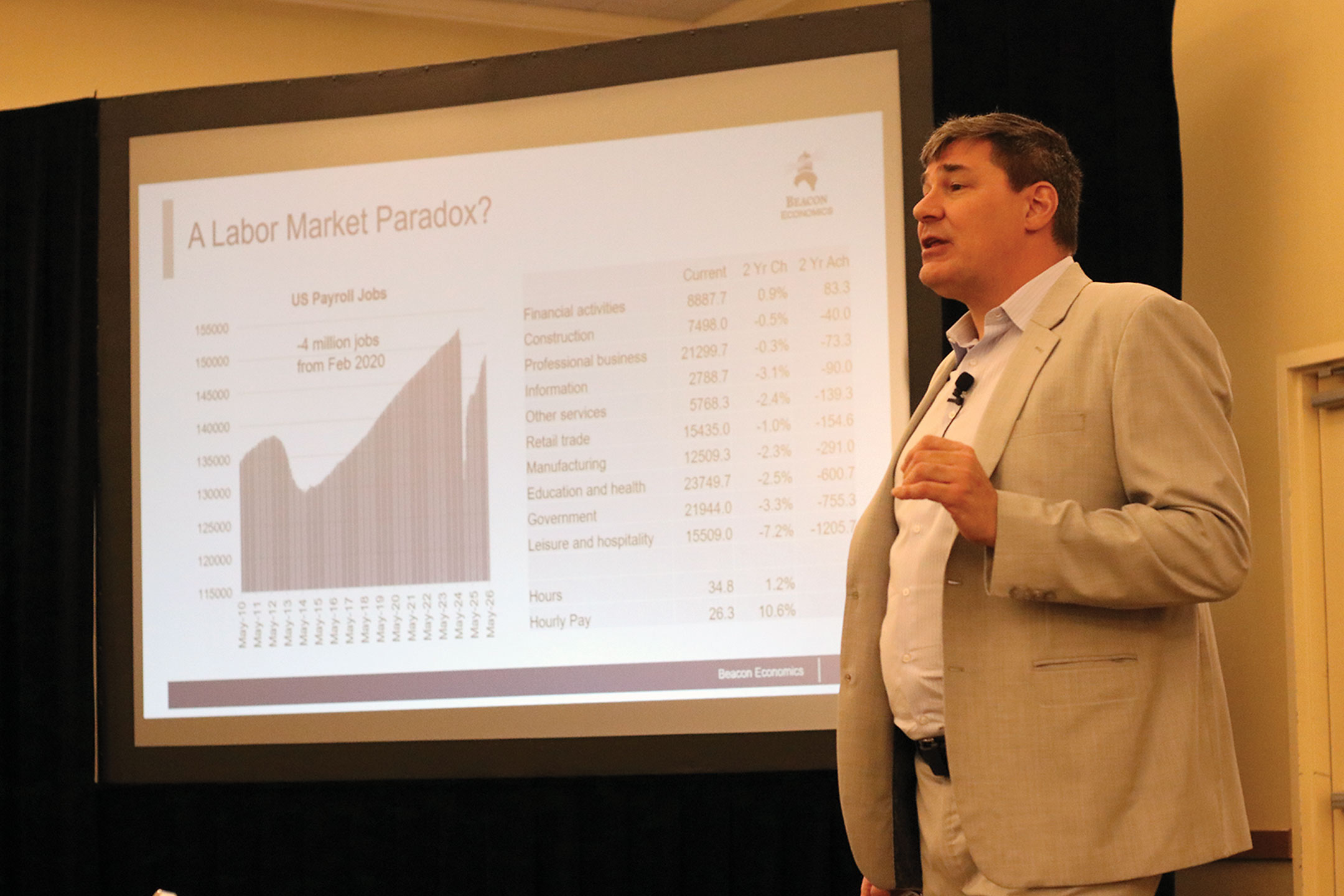 That trend should change as more multi-family housing is slated for construction this year as well as new starter homes to accommodate more families trying to move out of rentals. Real estate remains a tight market in Tulare County as a lack of inventory is driving up prices. Home prices in Tulare County increased by 21.4% from April 2019 to April 2020, a faster climb than Fresno and Kern counties, because there is only a six-month inventory of new homes and just a 60-day inventory of existing homes. Only 4.6% of the housing supply in California has been built in the last 10 years compared with states like Texas, which have built 14.1% of its housing during the same time.

“There is not enough housing for people to live in this state,” Thornburg said. “If you don’t build them, people aren’t going to come.”

Labor Market
Increasing the number of local residents entering the workforce may prove to be the most promising option. Thornburg said remote working is here to stay but it will be a hybrid model depending on the skill level of the employee, the type of work they are doing and the product or service being offered to the consumer. A report from the National Bureau of Economic Research shows that one-third of workers want to work exclusively from home while nearly a quarter don’t want to work from home at all. The rest said they would prefer to split their time between home and the office. Prior to the pandemic, working from home only represented 5.5% of all working days compared with 14.6% now. The biggest increases in work from home (WFH) days came in the business services, information, finance and insurance sectors where nearly a third of working days are expected to be at home going forward.

Thornberg said the shift to remote jobs has allowed many women, especially those with small children, the flexibility to enter or re-enter the workforce. This means more families can have dual income households and more employers may find workers by offering remote access. The female participation rate in the U.S. workforce is just 76%, less than 16 nations.

“The pandemic brought more income equality,” Thornberg said. “People who never had the opportunity to work now have opportunities.”

Remote jobs could also increase the viability of downtown commercial spaces in places such as Visalia. More people working from home means more companies will downsize their office and open up spaces for more small businesses. Those businesses are likely to hire at least a few in-person positions but the additional business should bring more people to the central commercial district.

Thornberg said the pandemic exaggerated the death of local retail, as brick and mortar stores reported sales higher than pre-pandemic years in 2018 and 2019 while e-commerce sales began to level off last summer. The U.S. vacancy rate for retail has fared better than industrial uses and is lower than 2010 levels near the height of the Great Recession.

More Middle Management
The last and most immediate answer is education and training. Thornberg said the hardest jobs to fill are middle management positions, employees who supervise and train others, mostly because there is a lack of training for those positions compared with programs for entry level positions. Many employers shy away from hiring high schoolers because they are woefully unprepared for the work environment after decades of minimum wage jobs shifting to unskilled adults who have more flexible schedules. Tulare County offers a variety of entry-level training but must ramp up its management training programs.

Education, and not just vocational education, is also extremely important to preparing the next generation of workers. Thornberg said the best idea to come out of Gov. Gavin Newsom’s office is a proposal for universal preschool. The United States spends the least amount on early education per pupil (about $500) of industrialized nations, far less than Israel ($3,327), Slovenia ($11,664) and Norway ($29,726).

There are plenty of jobs awaiting people in Tulare County. According to the EDD, non-farm employment in Tulare County dipped in all but four sectors from 2019-2021, but some of those sectors, such as education, health, government and leisure and hospitality, have increased the number of jobs since 2016. During the two and a half years of the pandemic, Tulare County only lost 2.1 percent of its positions because it was insulated from the massive decreases in air travel experienced by California’s coastal cities. Some local sectors took off during the pandemic, including logistics and warehousing, which increased employment by 17.3% from 2019 to 2021, retail trade, up 5.3%, and construction, up 4.7%.

“The Central Valley was not exposed to the worst problems of the pandemic,” Thornberg said.

Dollars for Demand
Despite news reports and reactionary federal policy, Thornberg reiterated the economic recovery from the pandemic has been swift and should have little long term effect. He said the economy has plenty of pent up demand to continue driving it forward and the dual threat of historic inflation and federal deficit spending will primarily affect the public sector and not the private sector long term.

“Where there is a profit, there is a way,” Thornberg said about the supply chain.

Thornberg said federal aid to local governments was an overreaction to the pandemic. For the first time since World War II, the percentage of national debt exceeded the country’s gross domestic product (GDP) and is projected to double by 2050, which would mark the largest increase in U.S. history.

“For every dollar Americans lost, the government gave us back $2.60,” Thornberg said. “Personal income grew at a pace we have never seen before.”

Household net worth has tripled since 2016 giving households more money to pay their bills and pay off debt. The percentage of households behind on rent fell from 15.5% in April 2020 to less than 14% in August 2021. Delinquent consumer bank loans are at a 20-year low. Homeowners have seen their equity spike to 140%, much higher than the time leading up to the housing crash, yet mortgage debt to home equity is at a 20-year low thanks to historically low interest rates. Personal savings have increased by $2.5 trillion from February 2020 to October 2021 and commercial bank deposits were up more than $4 billion from April 1, 2020 to Aug. 1, 2021. Consumer spending in Tulare County increased 20.6% from January 2020 to November 2021 and taxable sales increased from just over $2 million in the first quarter of 2020 to $2.75 million in the first quarter of 2021.

“We’ve never seen this large of an expansion in the money supply,” Thornberg said. “This is a cash driven economy, not a debt driven economy and Americans are sitting on piles of cash.”