VISALIA – Visalia expanded the amount of acreage in the city eligible for homeless shelters last week but also took actions to prevent them from being located in downtown or near residential properties.

Brandon Smith, principal planner with the city, said the city has planned to expand the LBNC and emergency shelter uses into new zones since it updated its Housing Element in 2020. Emergency shelters are already permitted by right, meaning they do not need to be approved by the planning commission, in the light industrial zone and low barrier shelters are already allowed in all commercial, office and industrial zones with a conditional use permit.

Under the proposed changes, emergency shelters would be allowed with a conditional use permit in the downtown mixed use, commercial mixed use and service commercial, for the proximity to essential services such as transit, as well as quasi-public zones, based on their similarity to existing uses in the zones such as churches and charitable institutions. Low barrier shelters would also be conditionally allowed in quasi-public and multi-family residential, based on its proximity to major roadways and transit services and because it has a similar residential density.

Vice Mayor Brian Poochigian said he wanted to increase the amount of land available for the two types of shelters but wanted to protect Visalia’s downtown and residential neighborhoods from the negative effects of the shelters. He suggested removing the downtown mixed use from the list of zones allowed for emergency shelters and removing multifamily residential from the list of zones allowed for low barrier shelters. 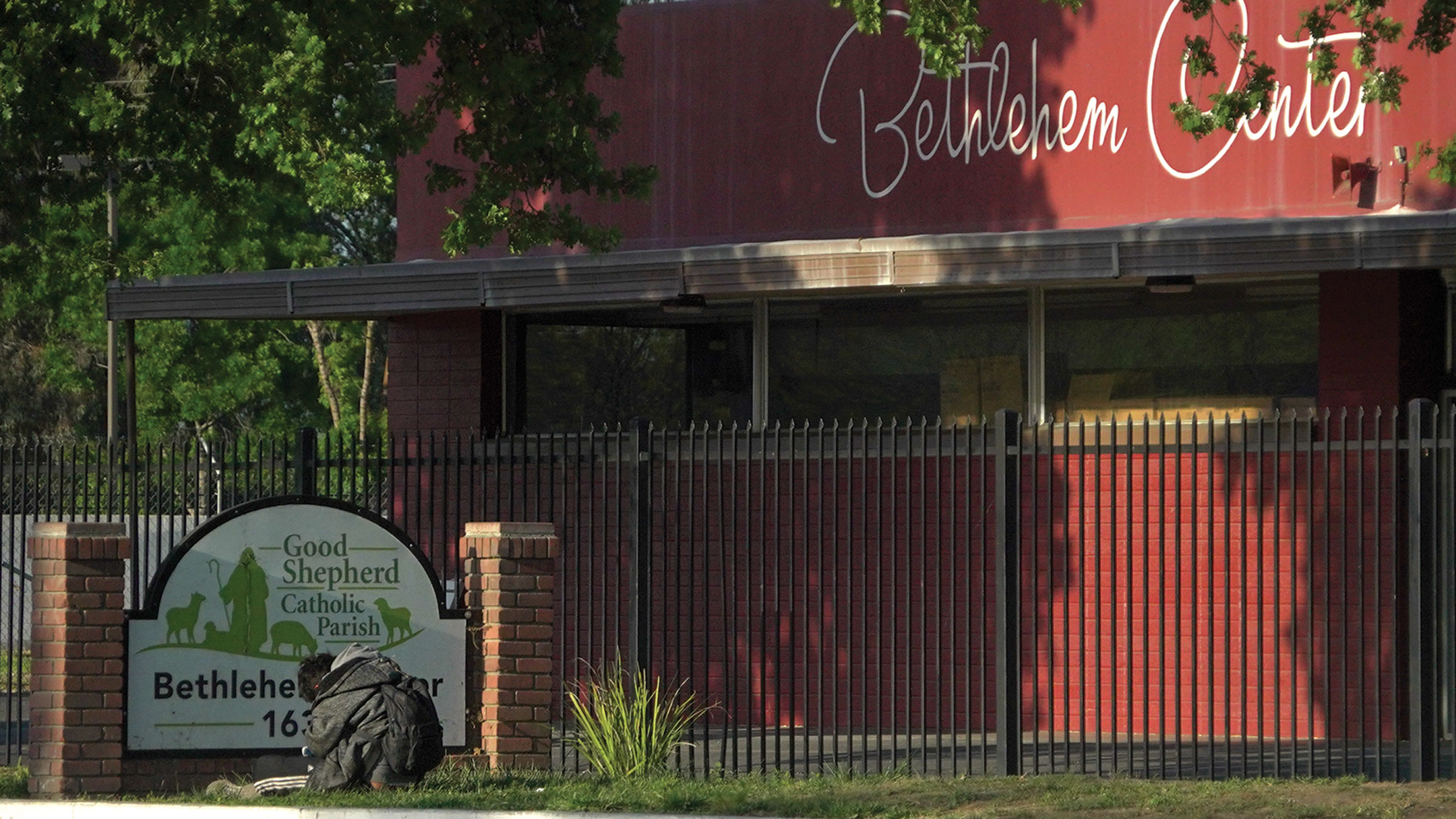 Photo by Rigo MoranA homeless resident sits in front of the Bethlehem Center in Visalia on April 5, 2022.

“I’m a little concerned with allowing the downtown mixed use,” Poochigian said. “I’ve seen where that hasn’t worked in other cities, for diversity shelters and next to multifamily residents from the older navigation centers.”

Mayor Steve Nelsen agreed saying that until cities can place homeless people in drug rehab and mental institutes where they can get well and “off the treadmill of homelessness” he would not approve any additional shelters in the northeast part of town, saying there are already five locations in that area providing services to the homeless, including Visalia Rescue Mission, Warehouse Ministries, Visalia Emergency Aid Council, Bethlehem Center and the eventual home of a proposed LBNC along Dinuba Boulevard across from Riverway Sports Park.

“I will not support another shelter in the northeast section of the city of Visalia,” Nelsen said, who lives just a few blocks from large scale homeless encampments along the St. John’s River. “It is not fair to the citizens of that area, when all of a sudden no one ever looks at any other section of the city. So, to ask me to put another one near my house? Oh, heck no.”

Another northeast Visalia resident, Rosalinda Alexander, told the council during public comment she didn’t see any benefit for the city to continue to offer more services to the homeless. She lives next door to the Visalia Rescue Mission and said the homeless leave there in the morning and then sleep in her bushes, defecate in her yard and then pass out in the gutters.

“What is the positive for your constituents?,” she asked. “I’d like to have kids soon and it doesn’t feel like a safe place to do that.”

Rev. Suzi Ward, who has been running the city’s warming shelter for the homeless each winter, said the goal behind the zoning was to help people out of homeless by offering them places to stay near food, services and transportation options. Based on council comments, Ward said it feels more like the council’s goal was to corral and hide the homeless while taking away their ability to access services in the process. She said the city’s approval of last winter’s warming center off Walnut and Ben Maddox forced many homeless people to take the bus from services downtown all the way across town where they were unable to find places to eat during the day. In one case, a homeless person was killed trying to cross the street from the bus stop to the warming center.

“And what happened one night when somebody was on a bus, took the bus to get to the warming center, they crossed the street, and they lost their life,” Ward said. “That to me, says we need to rethink what’s our motivation.” 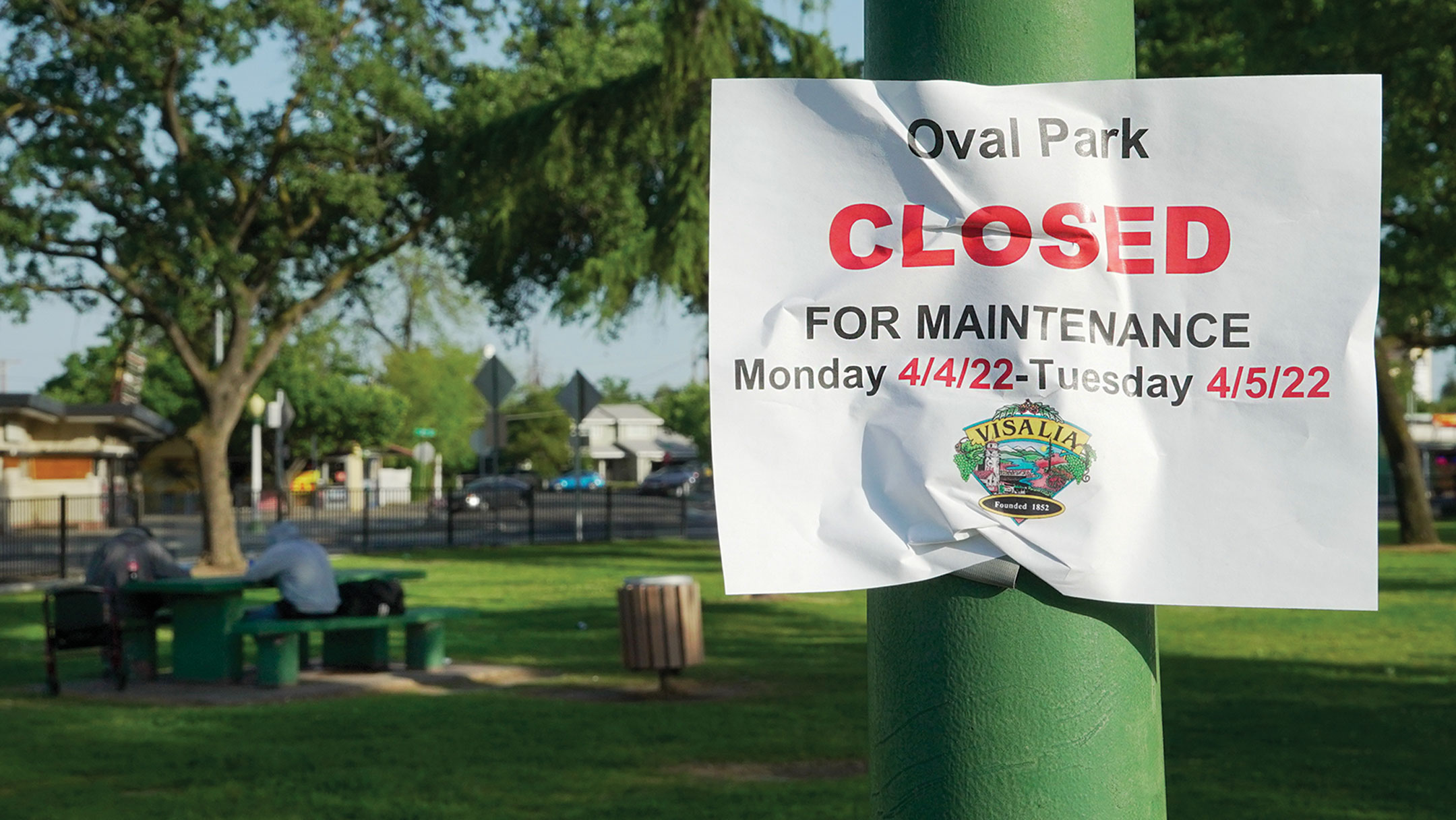 Photo by Rigo MoranThe city of Visalia posted a sign at Oval Park in downtown where a portion of the homeless community chooses to stay.

The update also required both types of shelters to be more than 1,000 feet from schools, 25 feet from residential property lines, and at least a 6 foot fence around the property. The facilities will only be allowed to have up to 100 beds per facility and will be required to have at least 10 public parking spaces, one employee parking space and five spaces for support service providers. A homeless person will only be allowed to stay for six months at a time and at least 5% of the site’s square footage should be outdoor recreation space limited to the hours of 7 a.m. to 10 p.m. Facilities will also need to have management, support staff or security during all hours of operation.

“So I think that’s really important in terms of the viability of these and ensuring that everybody behaves themselves,” Councilmember Greg Collins said.

Councilmember Liz Wynn said she liked the 1,000 foot buffer from schools, similar to what the city is implementing for smoke shops and adult oriented businesses, and Collins suggested the fencing be raised to 7 feet and be a solid wall of stone or brick to separate the facility from any nearby residential uses.

The council unanimously approved the zoning updates for homeless shelters with the changes to add a 7 foot solid wall facing neighboring properties, new operating requirements, and hundreds of acres of land where the shelters are allowed. The vote also removed the downtown mixed use as an eligible zone for emergency shelters and multi-family residential as an eligible zone for LBNCs.

Smith said the new rules would not affect warming centers, such as those run by Rev. Ward, or any emergency shelters or LBNCs already operating or approved for locations, such as the city’s proposed LBNC on Dinuba Boulevard across from Riverway Sports Park.

Earlier that night, the council re-authorized just over $2 million to build an LBNC as part of its action plan to spend $3.2 million in Community Development Block Grant funding from the state. The council had previously authorized the funding over two years on June 21, 2021 with an initial year allotment of $1.8 million. None of the money has been spent but the council has now allotted the full $2.05 million in funding to construct the LBNC.