After another bank was robbed in Tulare, the police department is searching for the suspect 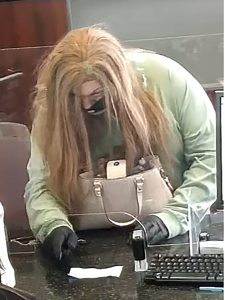 TULARE – On Wednesday, the Tulare Police Department responded to a robbery at Citizens Business Bank in Tulare around 3 p.m. Police have not yet located the suspect who was wearing a disguise during the incident.

According to the police department, on April 27 police responded to a silent hold-up alarm from Citizens Business Bank located at 1901 E Prosperity Ave at 3:12 p.m. As police arrived they learned the suspect entered the bank alone and produced a note demanding money and implying they were armed, similar to the robbery at Wells Fargo bank that took place on April 18. The suspect was obviously disguised to a point that witnesses were only able to describe them as someone with “a manly statue.”

As police began their investigation, they were able to obtain some photos of the suspect. The case is still under investigation and anyone with information is encouraged to contact the Tulare Police Department, 559-684-4249.