EDITOR’S NOTE: This series is split into four different parts and highlights what Care Pregnancy Resource Centers offers locally. In particular, the series looks at their prevalence in light of Planned Parenthood’s withdrawal from moving into a larger facility on Mooney Boulevard in the face of a virulent backlash from members in the community. The introduction of each installment is the same.

Part 1, below, looks at the first-hand account of interacting with the Care Pregnancy Resource Center in Visalia.

Care Pregnancy Resource Center in Visalia declined to be interviewed or comment for this series.

VISALIA – For a few weeks this spring, Visalia City Council meetings became a battleground. Terms used during public comment included “devil worshippers” and “baby murderers,” among others. Despite Planned Parenthood never having plans to start offering abortions in Visalia, the community’s response to the clinic’s attempt at moving into a larger office underlined just how deep divides over the procedure still run in parts of California.

The controversy ultimately caused Planned Parenthood to withdraw their plans for relocation, relegating the clinic to the small side street office where they currently offer services three days a week to a small number of patients per day. If they’d moved into the larger office, the new site would have extended its operations to six days per week and been able to serve 40 patients per day instead of just five. The move would have allowed Planned Parenthood to add primary and pediatric care to the list of services they already offer such as pregnancy tests, STI screenings and gender-affirming care.

These services are what Bryce Maurer expected to find when she took a pregnancy test at CPRC in 2017. A junior in high school at the time, Maurer was sent to CPRC and other health clinics around Tulare County to go “undercover” as part of a research study on reproductive health care access led by local advocacy organizations.

“When I first walked in, there was a really nice lady at the front desk,” Maurer said. “I was the only one in there, so that was nice because it felt really private.” The rest of her experience, however, was different.

Maurer said she was checked in and sent to take the pregnancy test before being placed in a private room. She was then handed a small plastic baby, similar to the good luck charms found inside Mardi Gras king cakes.

“I thought it was literally straight out of a movie,” Maurer said. “She was basically trying to convince me that this is what I’m growing in my body, and that it’s not in God’s plan to, you know, abort babies. At this point I didn’t even know if my test was positive or not.”

After a lengthy lecture about the negative effects of abortion on women’s physical and mental health and the benefits of choosing to put a child up for adoption, Maurer was informed that her test came back negative. 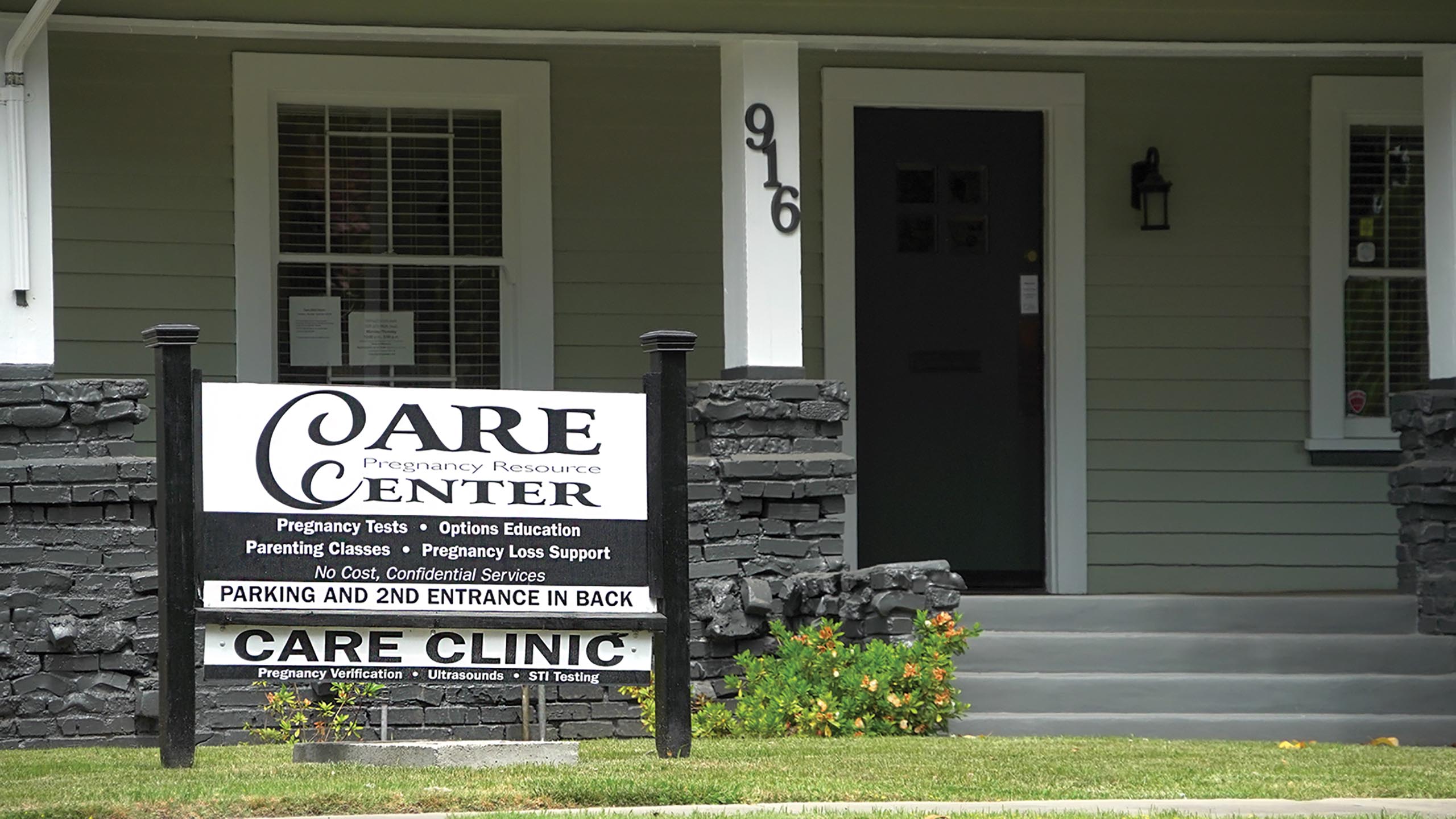 Care Center located in Visalia near Redwood offers a bevy of pregnancy services, but first hand accounts point to brow beating tactics to get young people to avoid getting an abortion.Photo by Rigoberto Moran

Maurer’s experience is common among people who seek services at similar centers. According to a study conducted by the Gillings School of Global Public Health, crisis pregnancy centers operate with the primary goal of convincing people who are considering abortion to continue their pregnancies. The study states that by blending free material resources like pregnancy tests and infant supplies with the dissemination of often misleading information through counseling and classes, crisis pregnancy centers have been blurring the lines between health care providers and “pro-life” advocacy groups for decades.

This has been the case for CPRC since the center first opened in 1983—at the time, it was named Crisis Pregnancy Hotline and Services, Inc., and began as a 24-hour hotline for people who found themselves unintentionally pregnant.

A section of CPRC’s 1986 articles of incorporation states that the organization’s specific purpose “is to encourage full term births of babies from pregnant women by providing counseling, assisting in the provision of clothing and other necessities of life for mother and child, and giving instruction in infant care.” A 2017 amendment to these articles goes further, stating that “The primary purposes for which this Christian corporation is organized is to glorify God by serving His people, especially those facing unplanned pregnancies.”

Their main web site mentions nothing about God or religion, and instead displays photos of brooding women with text that reads “Pregnant? Now What?” or “Considering Abortion?” The services they advertise include free pregnancy tests, ultrasounds, STI testing and “abortion information.” The link for the latter leads only to a list of declarations like “We believe you owe it to yourself to slow down, breathe, and take a moment to gather all the information you need before making a decision,” along with a link to schedule an appointment.

Considering this, it’s easy to see how someone in need of reproductive health care services—especially in a place like Tulare County, where services are significantly harder to access than in other parts of the state—might be drawn to walk through CPRC’s door.

EDITOR’S NOTE: This was Part 1 of the series. To read Part 2, a look at the social, economic and geographic barriers to reproductive care services in Tulare County, click here.