Greg Collins is retiring after 33 years on the council, Steve Nelsen and Brian Poochigian confirm they are running for re-election while Liz Wynn has not yet announced her decision

VISALIA – More than half of the Visalia City Council could have different faces come January as four of the five seats will be up for election on the November ballot.

Normally, the seats would be split between the midterm and presidential elections with three seats up for election this November and the other two in 2024. The unusual circumstance of having nearly all of the seats on the same ballot was created by the untimely passing of former Vice Mayor and longtime local elected Phil Cox in June 2021. Cox was less than two years into his second term representing District 2 on the council since being elected to the council in 2016. After his passing, the council appointed Liz Wynn to serve through 2022 and then have the voters select someone to serve out the remaining two years of Cox’s four-year term.

Wynn was a unanimous appointment because of her long record of public service in Visalia. She was also the only candidate to publicly state she was not interested in running for the seat in 2022. Wynn did not return phone calls for this story as of press time but could decide to run for the seat to see the completion of several major projects including the new council chambers and public safety building, make a decision on the proposed aquatics center and decide the fate of cannabis related businesses in Visalia.

At least one of the four seats will change as Greg Collins confirmed he would not be running in the District 4 election. After 33 years on the city council, 1975-1991 and 2005-present, Collins said it was time for him to step down.

“It’s time for new blood and someone with more energy,” Collins said. “I feel good about what we’ve accomplished and where we are financially.”

A city planner by day, Collins said he was satisfied with the overall planning of the community, which has managed to balance giant job creators at the industrial park with maintaining a vibrant downtown and a bustling Mooney Boulevard. He said the city has avoided unchecked urban sprawl and depressed portions of the city.

“We have kept our eyes on the ball,” Collins said. 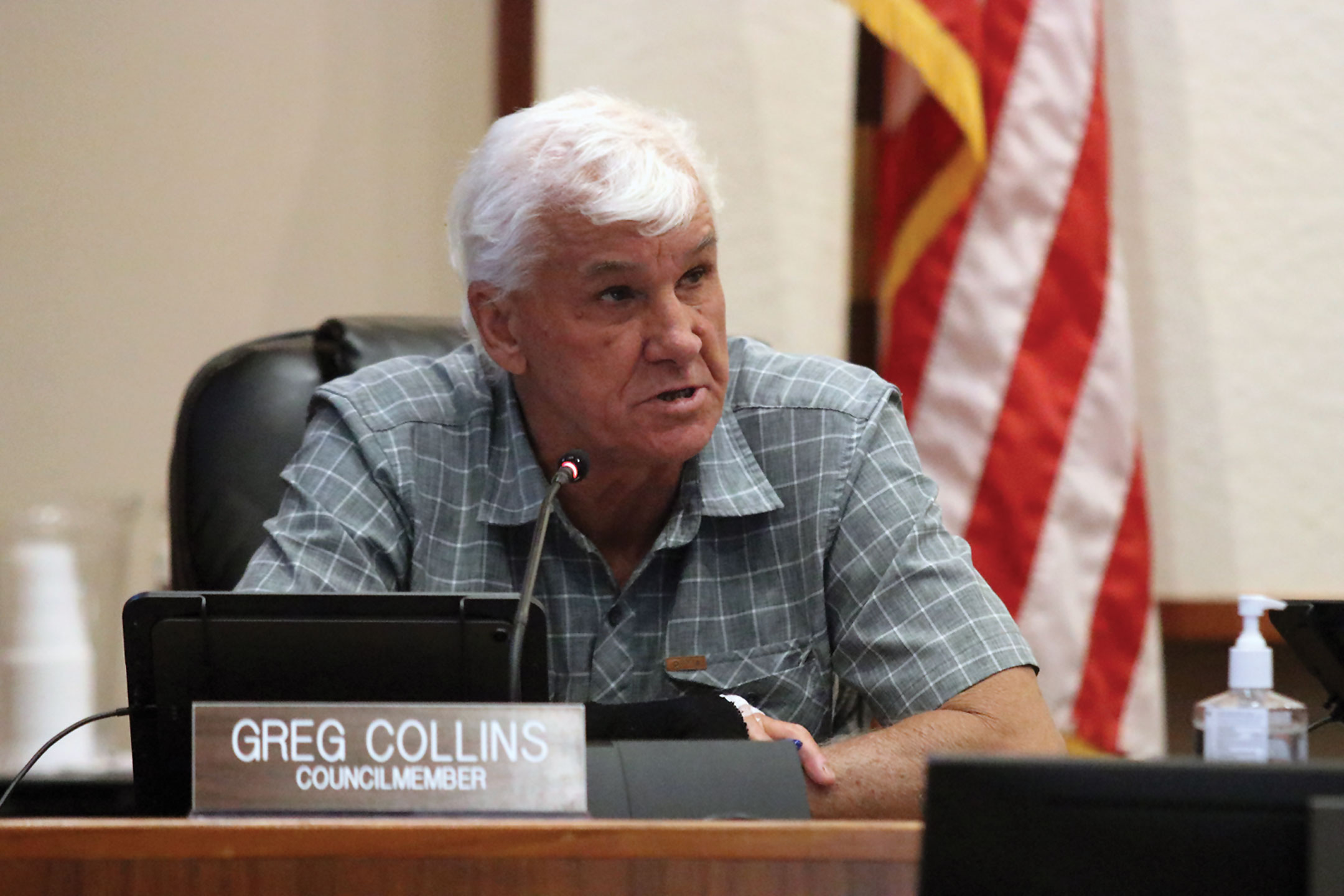 He has been pushing for a new aquatics center for the last four years and a new civic center for most of his tenure on the council and will vote and have input on both projects before exiting the dais. He is also hoping to persuade at least one more councilmember to lift the city’s ban on cannabis related businesses. Visalia and Dinuba are now the only two cities in Tulare County which have an all-out ban on recreational marijuana cultivators, processors and dispensaries. More specifically, Collins wants to use the additional tax revenue to offset the ongoing maintenance cost of having a new city pool.

“Here’s some opportunity to generate some additional funds for the city and be consistent with all our neighbors,” Collins said at the May 16 meeting.

Collins’ shoes will be difficult to fill but at least two people have already said publicly they would be running to replace him and represent the district. Political newcomers Emmanuel Soto and Marie Line Labbee both spoke at the May 16 meeting and both shared Collins’ interest in allowing cannabis businesses into town. Soto said the taxes generated could be used to improve the quality of life in Visalia while Labbee shared a personal story how cannabis products helped her daughter deal with two rare conditions and how many people in the community use cannabis products for medicinal reasons.

Mayor Steve Nelsen and Vice Mayor Brian Poochigian have confirmed they are running for re-election in November. Nelsen is currently finishing out his third term as mayor after leading the council in 2014-15 and 2016-17. Since joining the council in 2010, Nelsen has worked directly on projects such as the ImagineU Children’s Museum lease agreement, the Visalia Animal Care Center, the Waste Water Treatment Plant, Visalia’s Fire Station 53 and the Visalia Emergency Communications Center.

Specifically for his district, District 5, Nelsen said he spearheaded the effort to clean up the St. John’s Trail by having the city crews remove the homeless encampment in 2020 and earlier this year announced a deal with CalTrans to keep the shoulders of Highway 198 free from debris but have the state pick up the check.

“I’m very protective of certain areas of the city,” said Nelsen, who is also executive director of Downtown Visalians, a group of property owners who maintain the area and plan events.

If re-elected, Nelsen said he plans to focus on completion of the civic center, building more pocket parks throughout the city, finishing the city’s inclusive park next to ImagineU Children’s Museum, and continue the city’s efforts toward becoming an Certified Autism Destination for families with children on the spectrum making vacation plans.

“I’m proud that we are an inclusive city,” Nelsen said. “I take my job of representing everybody in the city to heart.”

Poochigian was elected to represent District 3 in 2018 at the age of 36. As transportation broker connecting haulers and shippers, Poochigian said he was proud of the concerted effort the city has made to upgrade roadways and intersections, such as the major project to redesign the intersection at Goshen Avenue and Akers Street and work currently underway on Shirk Road north of Highway 198.

“Roads will always be a top priority for me,” Poochigian said.

If re-elected, Poochigian said he will continue to work to streamline business permitting within the city which has become a sought after destination for warehousing and distribution industry giants such as Amazon, UPS and ACE Hardware.

“Visalia has become known as a business-friendly community,” Poochigian said. “I feel a bring a private sector mindset to the public sector.”

The filing period for candidates to run in the November election opens on July 18 and closes Aug. 12.