Mark Hopkins, director of mall security, said it was in the late afternoon when the Visalia Mall security team received a call from the shoe store. They reported a subject who was behaving strangely and attempted to get into the store’s stock room. Security officers were sent to deescalate the situation but found themselves unable to do so.

“He was a fairly large gentleman,” Hopkins described. “He was very aggressive with them.” 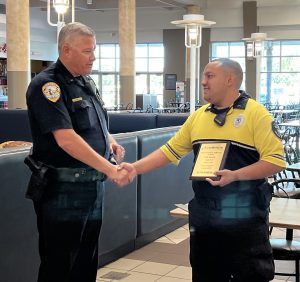 The Visalia Police Department was contacted for assistance but their efforts to deescalate the affair were met with noncompliance. Mall security cleared the store of employees and consumers as it quickly became loud and dangerous. The Visalia police officer attempted to secure the subject but the subject was uncooperative and there was a physical struggle until the two ended up on the ground. Garcia made a judgment call and took initiative by stepping in to help the officer with the assault. He was able to get the subject in handcuffs before additional officers arrived.

“It’s quite an interesting place to work,” Hopkins noted about the Visalia Mall. “We’re often tasked here with things that aren’t in the norm. It’s not the first time [Garcia has] had to assist.”

“Security Officer Garcia went above and beyond. He saw a situation where someone needed help and he did what he thought was right,” Rick Feder, Visalia Mall general manager, said.

Lieutenant Kevin Kroeze of Visalia Police Department attended the ceremony as an expression of gratitude: “It was a good opportunity to say thank you to Luis, for his help.”

The Meritorious Award was presented to Garcia at 8:30 AM on June 14.

“He was humbled to get the award,” Hopkins said. “He feels like he was just doing his job, because helping people is what he loves to do.”