DELANO, CALIF. – In the heat of summer, hundreds of individuals began a 24-day march to the state capitol to convince Governor Gavin Newsom to sign a bill in support of farmworkers rights.

On Aug. 3, over 100 individuals gathered in Delano at Forty Acres, the first United Farm Workers Union location, where they began a 335-mile “march for the Governor’s signature” to get Newsom’s attention. Led by the United Farm Workers, those marching are seeking support for Assembly Bill (AB) 2183, California Ag Labor Relations Voting Choice Act, introduced by Assemblyman Mark Stone (D-Santa Cruz). The Governor vetoed a similar bill last year and advocates said they are hoping the bill will avoid a veto this year. UFW estimates more than 5,000 individuals will gather at the capitol on Aug. 26 in celebration of National Farmworker Appreciation Day.

“This [bill] could bring about change, that gives farmworkers a choice of whether they want to be represented by a union or not,” Bryan Osorio, mayor of Delano said as cars passed him on the march. 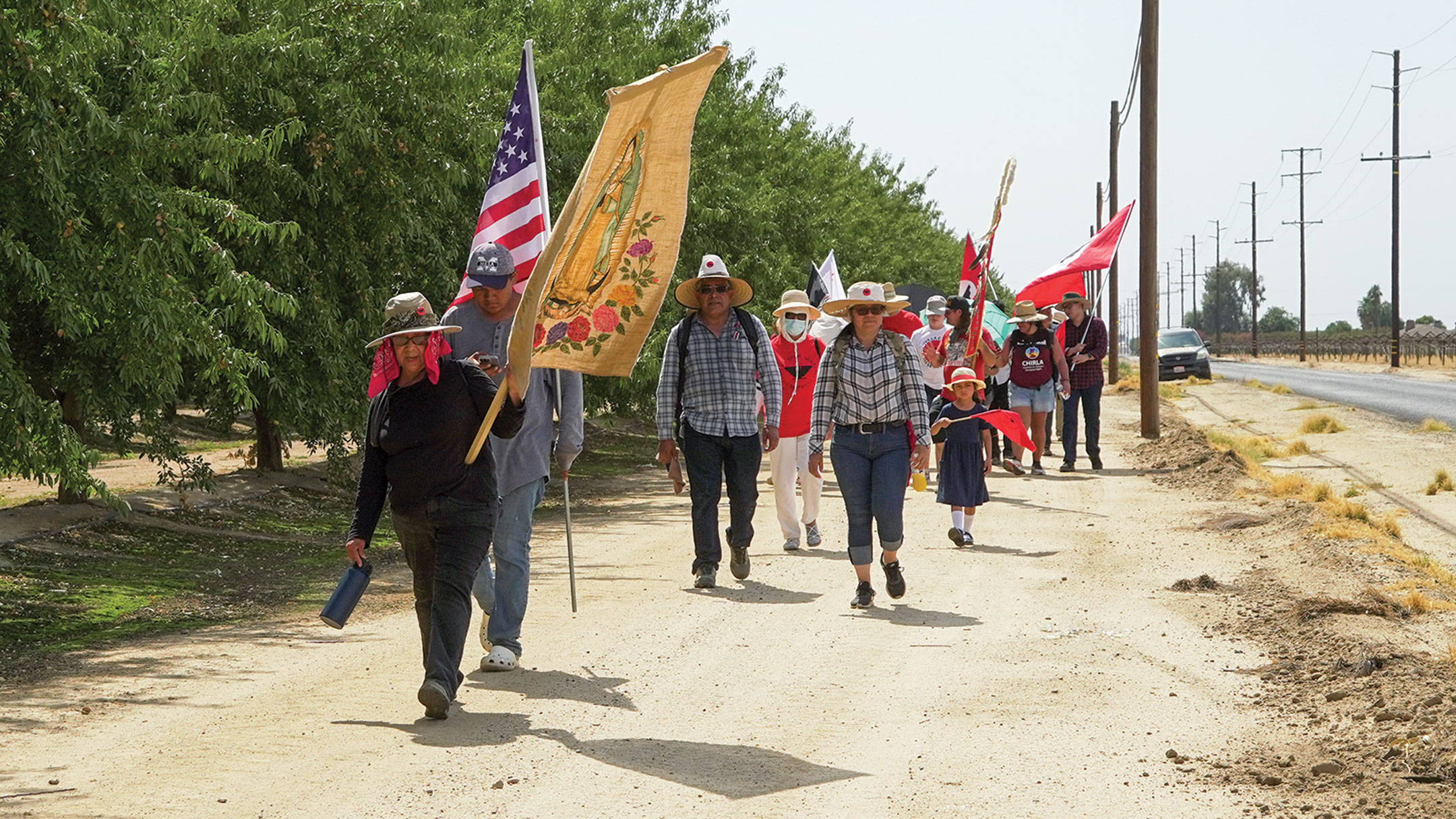 Led by the standard of Our Lady of Guadalupe, individuals march on day one of their journey to the state capitol. Photo by Rigo Moran

There are 25 permanent marchers who will take on the entire 335 miles. Along the way the permanent marchers will be joined by other supporters from up and down the state. Supporters could sign up and donate or choose to participate in the march. Camilla Rivera, a political organizer with United Farm Workers, said in the days leading up to the start of the march, they were seeing 50 people a day signing up. Catholic Bishop Joseph Brennan will be joining the pilgrimage for a few days from Parlier, Calif. to Biola, Calif.

Rivera said marchers will be hiking anywhere from nine miles to 20 miles each day. Marchers are retracing the route Cesar Chavez took over 55 years ago on his own mission to the capitol during one of the first farmworker disputes. On day one, the group marched from Delano to Richgrove, Calif., one of the shortest treks, traveling along Cecil Ave to Highway 65 before arriving at their destination.

This year’s march was originally scheduled in 2021, but on the first day of the march Governor Newsom vetoed a similar bill, AB 616, also sponsored by Assemblyman Stone. After vetoing AB 616, Newsom issued a statement saying the bill “contained various inconsistencies and procedural issues related to the collection and review of ballot cards.” Marchers then suspended the march until this year making their way to Sacramento with more urgency than before.

AB 2183 has been reworked and resubmitted for approval. Those who are marching are hoping to bring attention to the cause and cause Newsom to seriously consider this bill. Rivera said they will be met by supporters on the 24th and final day of the march for farm worker appreciation day Aug. 26.

“We are expecting 5,000 people to join us and rally in Sacramento and I think it’s going to paint a really clear and loud picture for the governor’s office,” Rivera said. “Farm workers are essential. They have been the ones who have been working throughout the pandemic.”

Rivera worked to coordinate committees in each town along the way. Known as “receiving committees”, these groups welcome the marchers into town as well as help find shelter and food for those marching. She said they have received strong feedback for those who want to help and open their homes to these individuals.

“Historically, when farmers were marching, they were sleeping on church floors,” Rivera said. “Because it’s so hot and because this march is so physically demanding, we want the marchers to be received with a bed and a shower and a warm meal.”

Particularity in Tulare County, the Tulare County League of Mexican American Women, has been extremely helpful in finding marchers a place to stay, according to Rivera. Marchers will reach Visalia on Aug. 8 and they will gather the next morning, on Aug. 9 at Riverway Sports Park where Deacon Henry Medina, from Good Shepherd Catholic Parish, will bless the group before they depart to Cutler.

“Currently, farm workers are only able to vote for the Union Election on their job sites,” Rivera said. “So they face a lot of fear and intimidation, which results in them not voting for their union at all.”

This is only the third time a march of this magnitude has taken place, according to Rivera. Cesar Chavez took on the trek in 1966. Each time the march was taken to raise awareness of important issues regarding farm labor. The last time this pilgrimage took place was in 1994, on the first anniversary of Chavez’s passing, to kick off a new field organizing and contract negotiating campaign, according to the UFW website.

“Since the new UFW organizing drive began in 1994, farm workers vote for the UFW in union elections and the UFW signs many new, or first-time, agreements with growers,” the UFW website states.

The union organizes and negotiates on behalf of rose, mushroom, strawberry, wine grape, lettuce and vegetable workers in California, Florida and Washington.