Visalia’s St. Mary’s undergoes construction with the removal of the church’s bell tower after signs of “leaning” were discovered at the top of the tower

VISALIA – The knell of the bell from the St. Mary’s Catholic Church will no longer toll with the recent demolition of the top two levels of the church’s bell tower.

The bell tower of St. Mary’s Church in Visalia is undergoing demolition as of Aug. 5 due to an issue with the shoring, or structure support, of the top two levels of the five-leveled tower, making them weak and unstable. The entirety of the tower itself will not be demolished, according to Chandler Marquez, director of communications for Diocese of Fresno.

City officials from the community development and city planning department, in addition to Lane Engineering and the project manager from the Diocese of Fresno realized their concerns over the tower on July 25.

When the inspection from the city officials and others was complete, the shoring of the bell tower was determined safe until the demolition could take place, according to the church’s website. Still, Marquez said the church took an abundance of caution by canceling planned services and will remain closed through the demolition process to keep all church goers safe. Additionally, the street on east Race Avenue is also closed off. 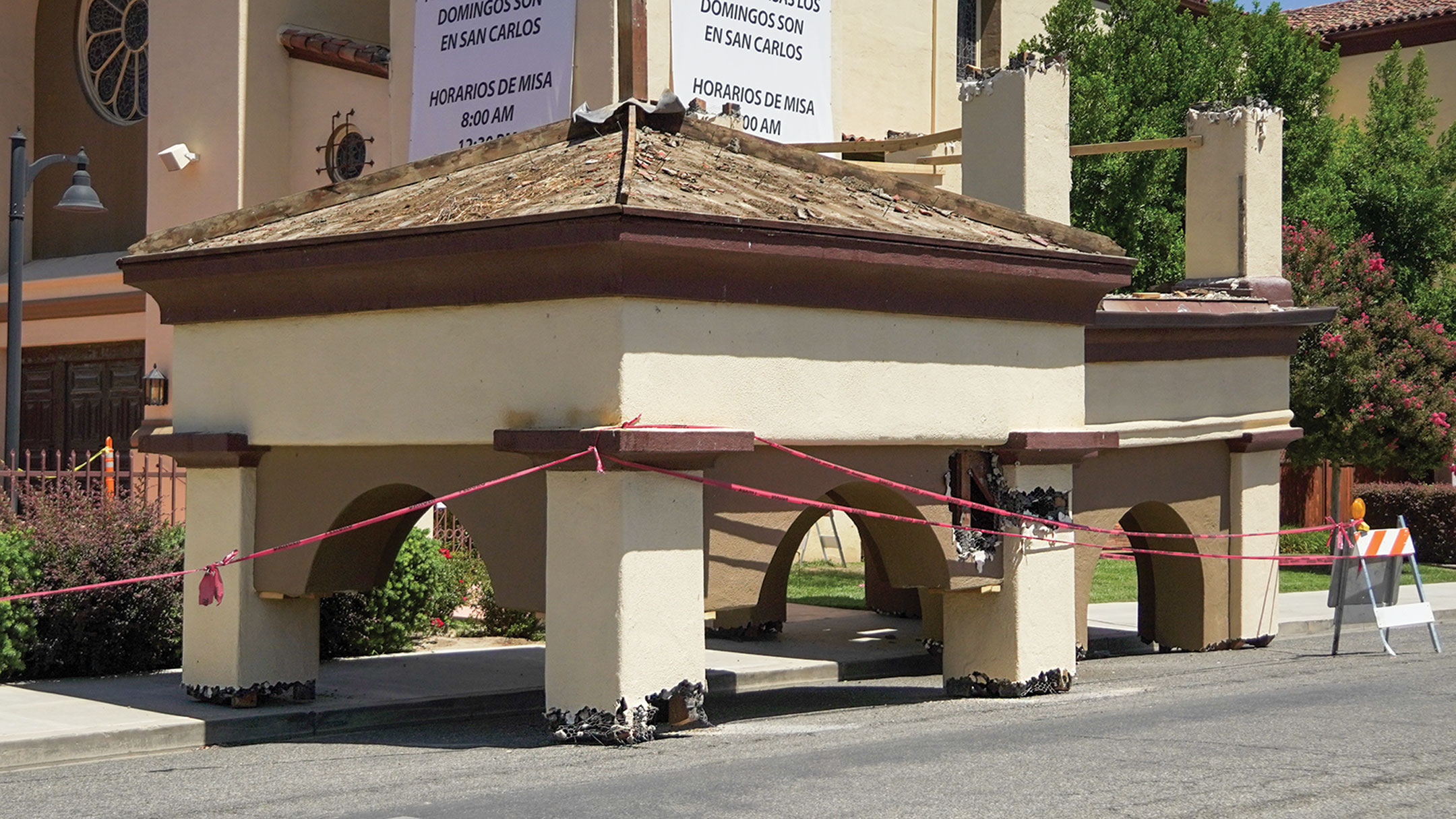 “We want to make sure everyone’s safe as possible, that’s our priority here,” Marquez said. “There’s a lot of things we have to take into consideration, the safety of the faithful and the residents of Visalia. Their safety is of utmost concern.”

After the top two levels of the tower are removed, the city of Visalia, Lane Engineering and the Diocese of Fresno’s property construction team will evaluate the remaining three levels of the tower to ensure it is safe, according to Marquez. They will decide the fate of the bell tower from that point on.

According to Cristobal Carrillo, associate planner with the city of Visalia, the upper section of the bell tower had two levels that were showing signs of leaning. It is unclear when the leaning began. More recently, it was noted that the top of the tower appeared to present a risk of toppling over. An investigation was conducted and it was determined that the bell tower was leaning as a result of degradation to the wood materials at the top two levels. It was determined that the church needed to close down to prevent any safety issues and the affected levels of the bell tower needed to be removed.

The update from the church stated that the church would begin the process of the demolition after an approval from the California Division of Occupational Safety and Health (Cal OSHA) was received. The approval was said to have taken place ten days after the church’s update was posted, which was on July 25.

Also according to the update, there is a significant amount of termite damage in the bell tower and an inspection will be conducted to determine termite damage to the church after the demolition is complete.

According to the Portuguese History Museum website, the construction of the current church began in January 1952 and was completed in 1954, with the total cost of the project coming out to $350,000. The website states that today, St. Mary’s, with 4,500 families in attendance, is one of the largest parishes in the Fresno Diocese.

“It serves many ethnic communities, including the Portuguese, who take pride in their important contributions to building such a magnificent house of God,” the Portuguese Historical Museum website states.

St. Mary’s is considered the Mother Church of Central San Joaquin Valley, according to the website of the Portuguese History Museum in San Jose. It was founded in 1861 by “Apostle of the Valley” Father Daniel Francis Dade. The worship space was initially a brick stable for six years until the first church was dedicated in 1869.

Also from the website, the planning for St. Mary’s began during World War II. Father O’Mahony began to plan the construction of a new St. Mary’s in 1943, with expected completion to be in 1949. The amount raised during the war years was invested in war bonds. In terms of fundraising efforts for the church, Portuguese immigrants and their descendants were major players. The Our Lady of Fatima Society had the most important role when it came to raising funds for the church with their sponsorship of the “Festa”, a special Portuguese celebration.