VISALIA – Judgment was passed against the two teen boys responsible for burning down the Porterville City Library, killing two firefighters as a result. One of the boys had the charges of murder and arson lifted entirely. The other had his murder charge dismissed but was still saddled with aggravated arson.

The trial was less than a week long, but juvenile court Judge Hugo Loza had heard enough to render a verdict. While defense attorney Richard Alvarez found the trial to be fair, neither families of the fallen firefighters, the prosecutor nor the district attorney believe justice was served.

“I understand a lot of people might disagree with the ruling, they don’t know the law, they only know what they felt,” Alvarez said. “Again, I think everybody needs to understand that this is a tragedy for everybody involved.”

John Sliney, the prosecutor for the Tulare County District Attorney’s office said he was disappointed with the ruling.

Judge Loza ultimately decided to dismiss the charges for one teen because the evidence presented showed that he was a bystander, and not an actual participant in the crime. According to Sliney, the two teens set the library on fire after setting a piece of paper on fire and then leaving it by a play structure in a corner meant for kids.

“The judge essentially said the minors needed to know that when they lit that piece of paper on fire, that they were committing murder,” Sliney said. “He said he didn’t believe that they could possibly know that at that time, and I disagree with that legal reasoning.”

Parents of both firefighters Patrick Jones and fire captain Ramond Figueroa said they don’t believe justice was served and were shocked with the speed in which the trial occurred.

“Our families have been devastated twice,” John Jones, father of fallen firefighter Patrick Jones, said. “Once by two juvenile delinquents on 2-18-2020 and once again, by a self serving juvenile judge.”

Captain Figueroa’s father, Ramond Figueroa Sr. said it was a disgrace having to hear the judges’ ruling. He said the entire court proceeding was a mockery of the judicial system. “Judge Lazo’s decision sends the message that it’s okay if your actions kill someone, but don’t worry the law will protect you from being held accountable.” 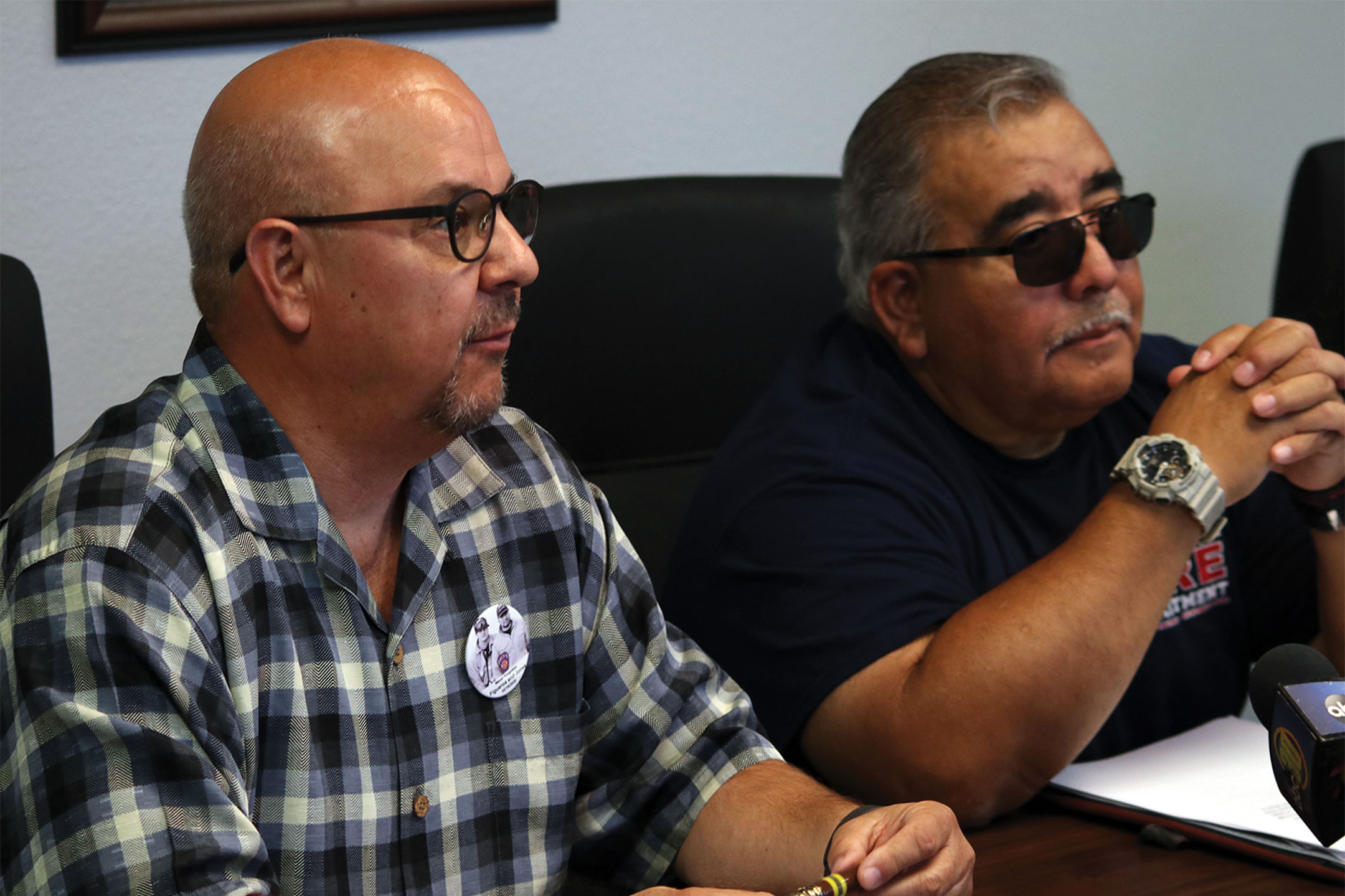 Fathers of the fallen firefighters share their thoughts and feelings on the verdict reached during the trial, on Aug 23. John Jones (left), Ramond Figueroa (right).Photo by Maddi Langton

Family members of the fallen firefighters are not alone in their thought process. District Attorney Tim Ward expressed his disappointment with the ruling as well.

“It is absurd that the Judge apparently found more fault on part of the victims or their equipment than he placed on the minor who was responsible for lighting the fire,” Ward said. “We share the continued grief and frustration of the families in the Judge’s decision not to hold these minors responsible in the loss of their family members, and the loss to the entire community of Porterville.”

The one teen charged with aggravated arson will face disposition (sentencing) at the end of September. Due to rulings within the juvenile system and dealing with jurisdictional situations, the minor will not be in custody any longer than when they reach 25 years of age.

“The charges if they were adults would be up to 17 years, eight months in custody, but juvenile court jurisdiction would have the ability to impose that type of time in terms of custodial time, however, they lose jurisdiction at age 25…so there would be no custody after that,” Sliney said.

“If there had been no fire, Captain Ramond Figueroa and firefighter Patrick Jones would have had no need for the breathing apparatus and would be alive today,” Figueroa Sr. said.

The Feb. 18, 2020 fire investigation uncovered that upon being first contacted by law enforcement, the minors denied being at the library when the fire started. After confronted with video evidence, the teens were arrested and placed inside a police vehicle where the two were recorded discussing events from when they were in the library together.

Witnesses testified that afternoon both teens were present in the children’s reading area. Evidence showed that one minor said he lit a piece of paper on fire and handed it to the other. Video evidence showed the minors fled together as the fire quickly spread to stuffed animals, decorations and other children’s items. As firefighters fought the blaze, Captain Figueroa and Jones died while engaged in firefighting operations.