VISALIA – The Mt. Whitney Pioneers boarded the Reedley Pirates’ ship and plundered their undefeated record, taking home 20 gold points and leaving the pirates with only 13. Despite an attempt on the very last play for a touchdown by the Pirates to take home the treasure, the Pioneers gave no quarter. The pass was incomplete and the Pirates sailed home empty-handed.

Coming off a bye week, the Pioneers had extra time to prepare for the undefeated Pirates. According to linebacker and running back Cody Crippon, the Pioneers were in high spirits all week leading up to the game and carried that energy throughout the game with the help of their boisterous student section backing them.

“I think the homecoming game definitely brought a big aspect to it,” Crippon said. “But I think that us players were just so ready to come back and finally compete how we know we can.” 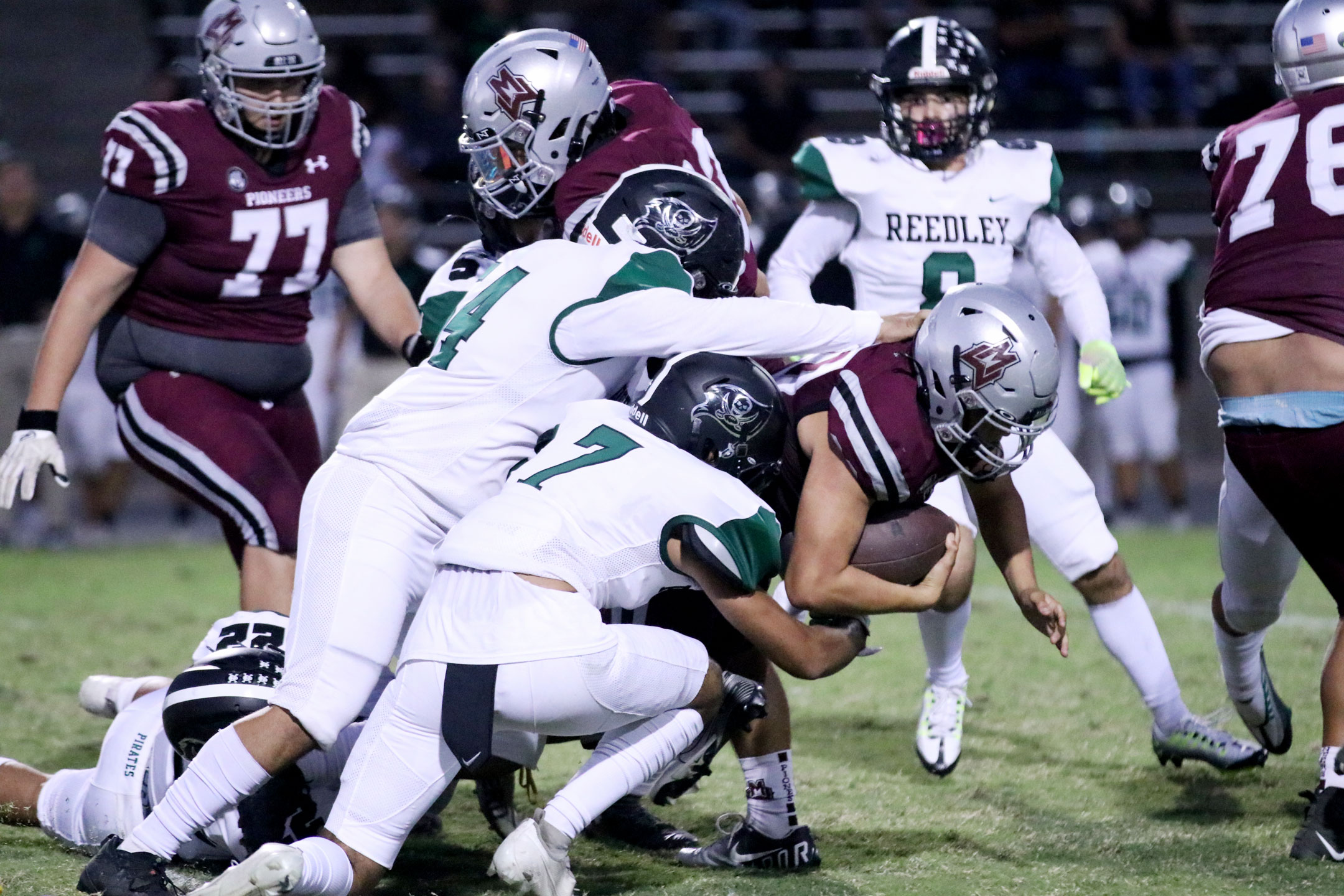 Several Pirates attempt to take down a Pioneer as he pushed through holding on to the ball. Photo by Claire Livingston

The team’s confidence boost came after a three-game losing streak and just in time for league play to start next week. The first big run into the endzone lit up the stadium in cheers as the team roared with elation, slapping each other on the back, hype to do it again.

“I learned that we can do anything we want,” Mt. Whitney defensive end Axel Romero said. “If we can believe it, we can achieve it.” 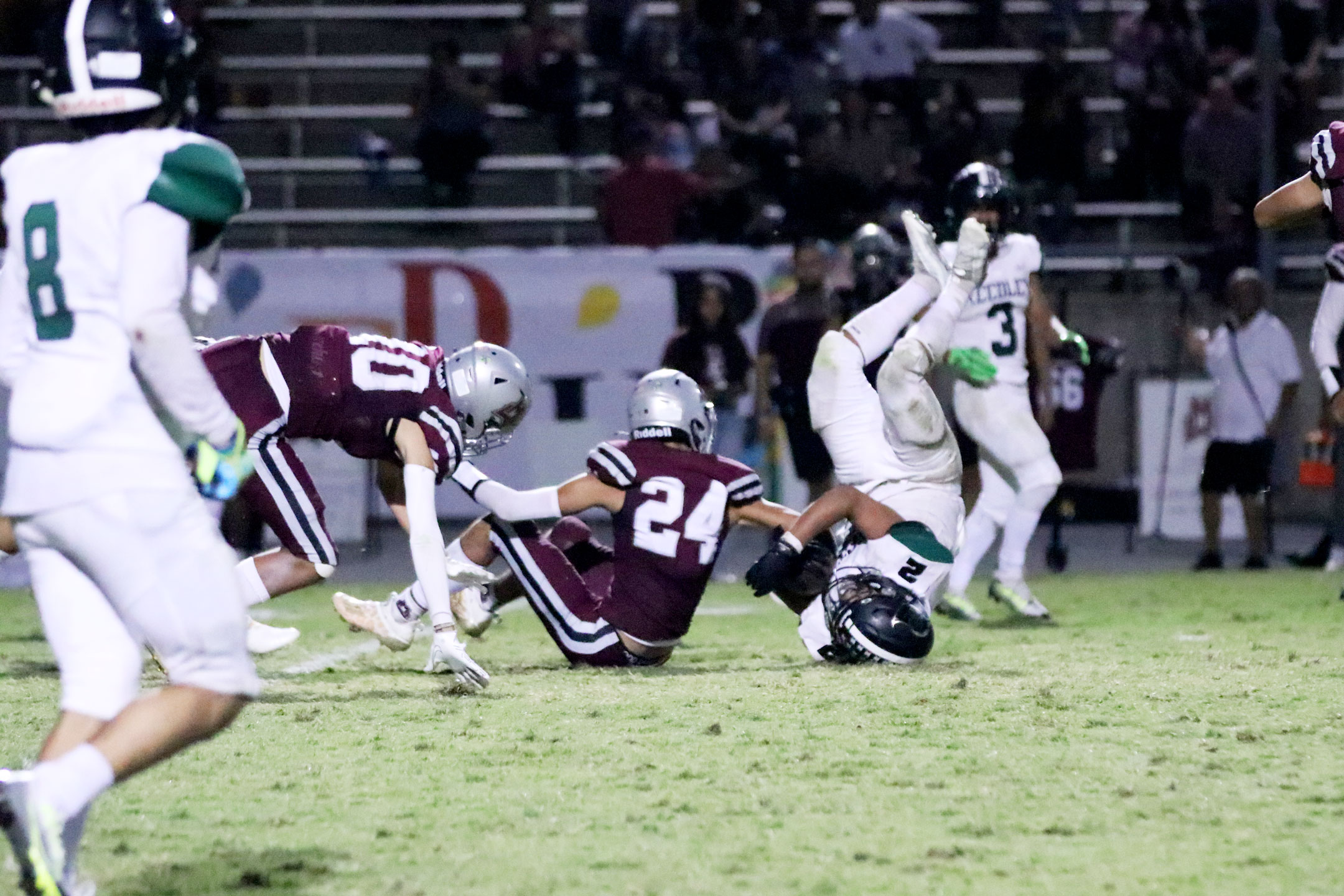 Pirate player catches the ball and does a rollover move while trying to hold on to the ball. Photo by Claire Livingston

At halftime, Mt. Whitney wide receiver Parker Ellis was crowned homecoming king. As it was revealed, his teammates broke into cheers behind him, climbing up on the bench to show their support for their teammate who plays a pivotal role both on and off the field.

The Pirates put their first touchdown on the board just before halftime and scored another one in the third quarter. They would have been tied with the Pioneers if not for a bad snap on the extra point, which put the score at 14-13. 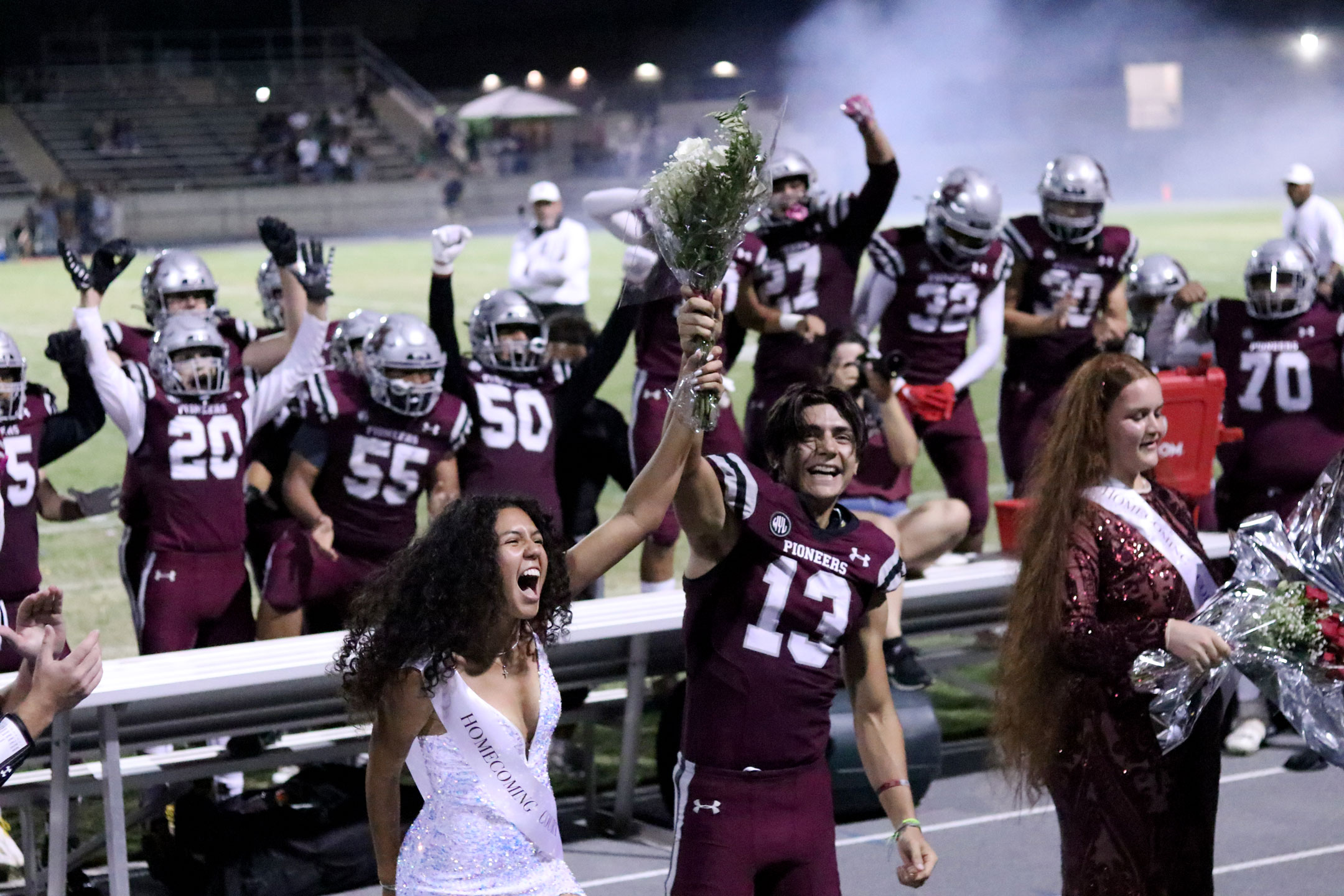 Parker Ellis wins homecoming king during half time of the game with his whole team there to support him.Photo by Claire Livingston

Five seconds into the fourth quarter, the Pioneers secured their win with another touchdown. Despite missing the extra point, their defense was on too much of a high to let the Pirates take it home. Though the Pirates made an attempt to win the battle, setting up for a touchdown as the clock ticked down, the pass thrown with a few seconds left just missed the fingertips of their receiver and the Pioneers were declared victorious.

“We knew they were battle-tested and were a little worried about them coming off a bye week to prepare for us,” Reedley head coach Tony Gates said. “The team that makes the least mistakes is probably going to win and we made a few more than they did.”

The Reedley Pirates will begin league play against Immanuel on Sept. 30. Their home stadium is under renovation and will be on the road for every game this season.

Mt. Whitney will begin league play in the new East Yosemite League by traveling to Porterville on Sept. 29.