EXETER – This year’s coronation for the Miss Exeter Sponsorship Program was open to the public at the town’s annual Fall Festival, where Raelyn DeWitt was crowned the winner amongst six participating candidates.

The coronation ceremony took place on Oct. 8, in downtown Exeter at the annual Fall Festival. This is a change from the tradition of prior years, where the ceremony was held at an exclusive dinner. This year the coronation was brought to the public and allowed residents to witness the crowning of Exeter-raised Raelyn DeWitt as Miss Exeter by her predecessor Natalia Genetti. Nadia Majia was awarded runner-up as well. 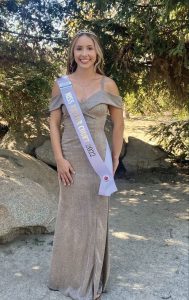 DeWitt grew up in the outskirts of Exeter, where she said she didn’t partake in many community events or even know the town very well. She said she rodeoed a lot as a child and because of that, her family was away from home and on the road quite often. Now that she is Miss Exeter, she is eager to become familiar with the community.

“I really am excited to embrace the opportunity to go to more community events and be more involved,” DeWitt said.

After she graduates from Exeter Union High School, DeWitt hopes to attend either Northern Arizona University or Boise State University to obtain a bachelor’s degree in science. With that degree, she plans to pursue her dream of entering the medical field. Although she is still uncertain of what potential career in the field she may pursue, she said she has a particular interest in either a profession as an EMT or, more favorably, a pediatric doctor. As someone fond of children, DeWitt said that is one of the reasons she has enjoyed her role in the Miss Exeter sponsorship program.

“You get to meet a lot of children in the community and you get to see their little smiling faces,” DeWitt said. “They’re always excited about a girl in a tiara, they don’t care who you are. As long as you look like a princess, they’re excited.”

Throughout her high school career, DeWitt was involved in sports like cross-country and track. She said she prides herself on being able to push herself to extreme limits when it comes to running physically and mentally. She said her team was much like a second family and together, they were able to top Exeter’s 4 x 100 meter relay track record.

In addition to the crown, DeWitt received a $1,000 scholarship from the Exeter Chamber of Commerce. She also received a gift basket filled with treats from local shops like an Exeter Coffee Co. gift card, a brownie from Flour Petal Cakes, bracelets, hair accessories and more. The other contestants, runner-up Nadia Mejia, Anjali Velasquez, Averee Estep, Tiara Daly and Aleena Gonzalez, received smaller versions of the gift basket as well.

DeWitt said when she was announced as Miss Exeter, she received nothing but support from her fellow contenders, who were all just as excited for her as she was herself. She said Aleena Gonzalez, who is also her good friend, even began to jump in excitement.

In addition to support from her contenders, DeWitt was personally sponsored by the nonprofit organization Exeter Lions Club. She said she gained her sponsorship from the nonprofit when asking for a separate sponsorship for kids to go camping at Young Life, a Christian program that gives high school students opportunities to ask questions about the religion in depth. After she introduced herself to the Lions Club and mentioned her role in running for Miss Exeter, DeWitt said the organization offered to sponsor her on the spot.

As a Christian herself, DeWitt said her religion has taught her the importance of extending kindness to people, and helps by providing guidance through the harder aspects of life.

To become Miss Exeter, DeWitt and her contenders had to fill out an application to be reviewed by the Exeter Chamber of Commerce. For the application, candidates had to send in an official transcript to prove they maintained a certain grade point average, submit a personal essay and act as an overall good representation to the community, according to Tina Rice, CEO for the Exeter Chamber of Commerce.

“In recent history, I do not know of anyone that has not been selected to participate,” Rice said. “I would think the only thing that might hold someone back would be if their grade point average didn’t meet the minimum requirement.”

According to Rice, the first Miss Exeter Sponsorship Program took place over a century ago on Nov. 15, 1913. This year, the chamber decided to host the coronation at the town’s Fall Festival not only because of minor scheduling issues, but to give the community of Exeter a chance to witness the ceremony as well.

“We wanted it to be more open to the public where [people] didn’t have to buy a ticket,” Rice said.

Additionally, Rice said the chamber wants candidates for the program to get something valuable from it, and provides learning experiences for the contenders with real world experience through things like faux-interviews, practice with public speaking and essay-writing. In addition to giving the crowned winner of the program a $1,000 scholarship, the runner-up receives a $500 scholarship as well.

Rice said it is currently uncertain if future Miss Exeter Sponsorship Programs will be hosted at the Fall Festival going forward, but that will eventually be decided by the chamber of commerce’s board of directors and Fall Festival committee.