VISALIA – Visalia’s city council candidates had their final showdown at Cafe 210, where cannabis was a budding topic.

On Oct. 24, ten of Visalia’s city council candidates faced off in the final forum leading up to the November election. Across the board, candidates agreed that homelessness and safety were a top priority, but the crowd was also able to hear differing opinions the candidates had over allowing a cannabis tax and dispensary to roll into town.

Visalia has yet to partake in the goldmine that is cannabis tax revenue, a business that the neighboring city of Woodlake dove headfirst in. District 4 candidate Marie Line-Labee stated that Green Bean, a marijuana dispensary in Woodlake, sells the majority of their products to Visalia residents, which translates to 80% of their customers. 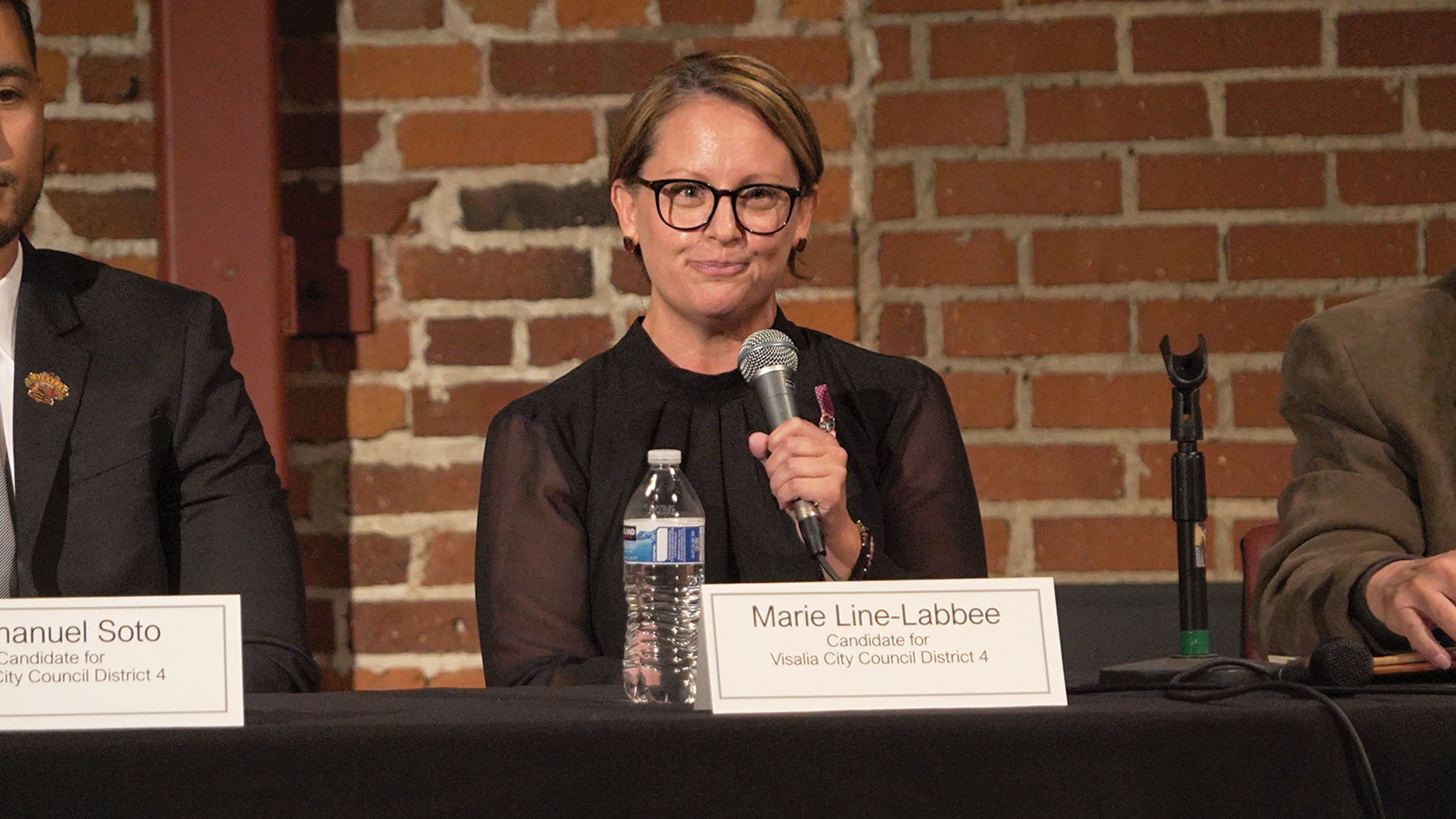 Marie Line-Labee speaks during the Visalia City Council candidates forum on the prospect of cannabis dispensaries in the future. Photo by Rigo Moran

“Our police chief confirmed that we cannot regulate what is already here until we have the establishment here to change the game,” Labee said. “So by actually creating the establishment here, not only are we benefiting from the tax income, we’re allowing our police departments to do their job more effectively as well.”

On the flip side, District 5 incumbent Steve Nelson opposed any future ordinance due to the fear it would negatively affect teenagers.

“Teen drinking is down, [but] cannabis and vaping is up,” Nelson said. “Another concern as teens and adults are using more high potency concentrates than traditional flower products. It’s not about the costs of public safety. It’s about human costs. So for that reason, I oppose cannabis sales.”

District 4 candidate Bob Ainley chimed in stating that the cannabis industry and its effects are hardly understood by the general public. He said safety risks could arise from marijuana, such as cops not being able to test for the substance immediately like in the case of a DUI. Also, Ainley believes the revenue is meager in comparison to the city’s actual budget.

“I don’t think that the social costs associated with recreational use of marijuana dispensaries is very well understood,” Ainley said. “If we’re going to write an ordinance for it, we need to understand it.”

Ainley passed the mic to District 1 incumbent Liz Wynn, who echoed a similar point. Wynn argued that she soon fears local control on marijuana will be challenged by the state, and hopes that the city of Visalia can come up with a revenue and allocation plan in preparation for that. She stated that though dispensaries seem promising, it is not a sustainable source of revenue. 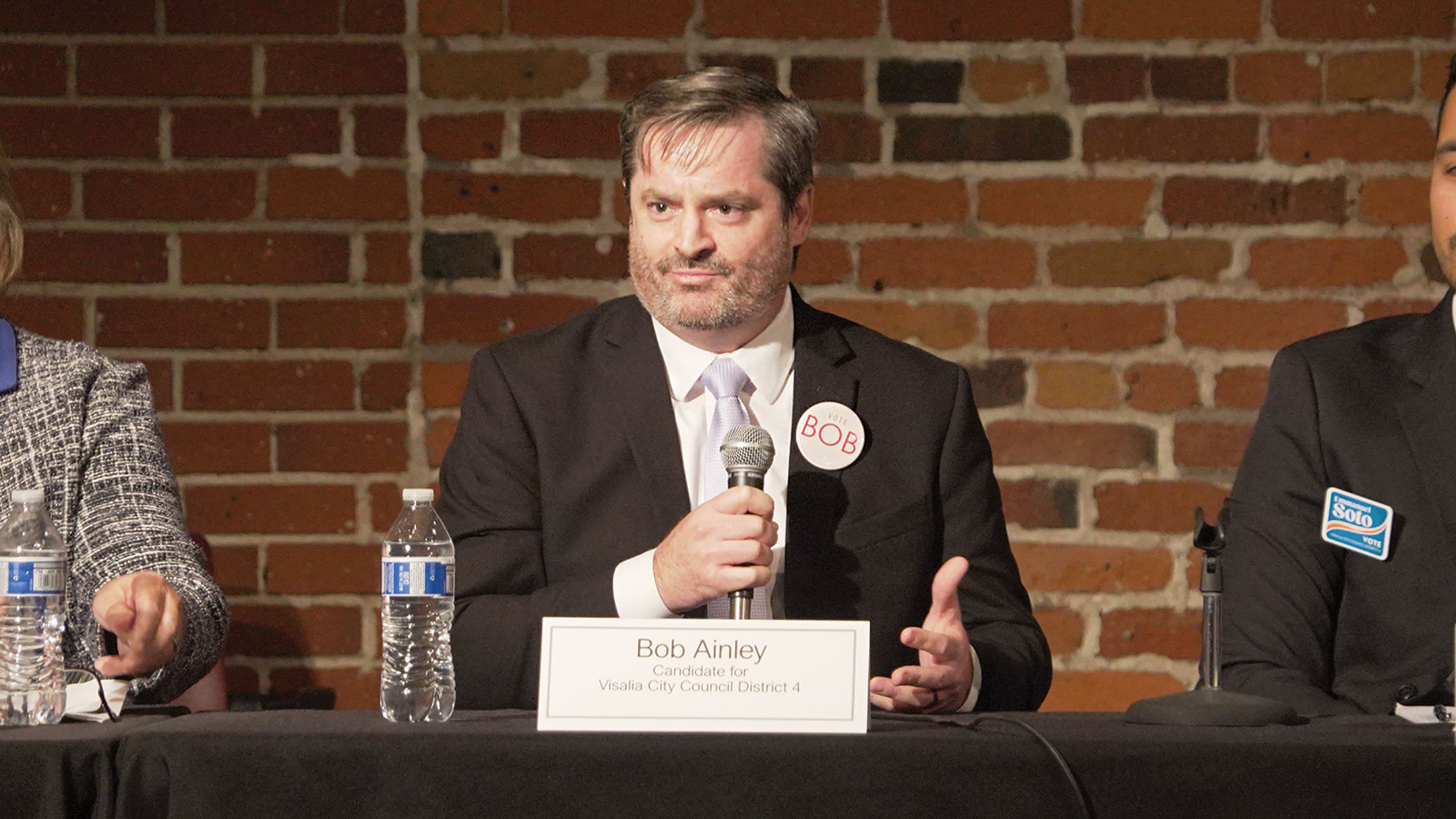 District 4 candidate Matt Ainley chimed in about a cannabis ordinance and said that the topic is not understood enough to warrant putting a rule on the books. Photo by Rigo Moran

“This looks like it’s a cash cow, the panacea for everything from parks to homelessness, but I don’t think that’s going to be the case,” Wynn said. “Before we do something that is going to impact our future and impact my grandchildren, I want to make sure that we have the facts, we have a clear understanding of what we’re getting into.”

Candidates also dove into future city projects and priorities that they wanted to focus on if elected. Though almost every candidate seeks to address homelessness, District 1 candidate Justin Bolton hopes to make public parks more inclusive for children with disabilities.

Emmanuel Soto, running for District 4, also chimed in and was among those who stressed the severity of homelessnes and the importance of low-income housing for those recovering from chronic homelessness. Soto also works at Self Help Enterprises, which brings aid and shelter to many homeless throughout the valley.

“Something that goes hand in hand with [homelessness] is low income housing,” Soto said. “Where are these people going to go after they’ve been to the shelter and gone through the process?

District 3 incumbent Brian Poochigan’s priorities looked the most different than everyone else’s, as he believes road work is an essential part of the city’s growth. In order to help businesses stay afloat and to be built, Poochigian argued that traffic to those businesses has to run smoothly.

“Lovers Lane interchange has been the worst interchange for 30 years, and we’re just beginning to work on it,” Poochigian said. “As the city grows, we’ve learned that we had to put the infrastructure in first before the building happens so traffic circulation could get around smoothly. And those are the projects that I really get excited about because it really impacts Visalia.”