PORTERVILLE – A man from Fresno County with almost 20 years of fire service under his belt has been named the new fire chief for the city of Porterville.

The city of Porterville announced Bryan Cogburn, 44, as the new fire chief of Porterville Fire Department. Cogburn has served as acting fire chief since November 2021, after former chief Dave LaPere took medical leave, and was sworn in as fire chief on Oct. 20.

“Looking beyond the next year, into the next three to five years, there’s department planning for a fourth station, increasing our staffing and meeting our response time goals,” Cogburn said. “That [strategic planning] document will be a guiding document for our department.”

Cogburn is the tenth fire chief to serve the Porterville Fire Department since 1927. He began with the Porterville Fire Department in February 2019 as a battalion chief, and was promoted to deputy chief in June 2021. Cogburn said as the deputy chief, he was the natural choice to fill LePere’s shoes after his medical leave last year, and accepted the city manager’s, John Lollis’, request to serve as the acting fire chief. 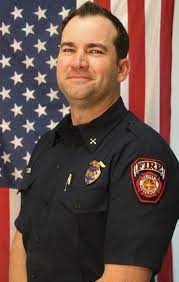 “When I was put into the acting role, I treated it like I was the chief,” Cogburn said. “Like I was in the position to make changes, to move the department forward and continue to progress in the areas that we needed to grow.”

Before coming to Porterville, Cogburn served as a captain of the Tulare City Fire Department from June 2013 until January 2019. Before that, he served in the Hanford Fire Department as a full time firefighter from May 2005 to June 2013. Prior to becoming a full time firefighter with the city of Hanford, Cogburn said he started his career as a seasonal firefighter with Cal Fire in Fresno County, close to his hometown of Shaver Lake. From 2003 to 2005, he was away from home weeks at a time traveling throughout the state as a wildland firefighter.

After former fire chief Dave LaPere announced his retirement, the city began their search for a new fire chief and came to the conclusion that Cogburn had the necessary qualifications and experience for the position. According to Yuriko Velarde, administrative analyst for the city of Porterville, LePere’s official retirement will be on Nov. 1.

While serving as acting fire chief, Cogburn provided the fire department with strong leadership and direction while overseeing projects. He also served as the strike team leader for the California Office of Emergency Services, which is a cabinet-level office that serves the state leadership hub with major emergencies and disasters, on out-of-county campaign fires.