“The goal was chasing the perfect game,” Porterville head coach Keith Thompson said. “It wasn’t really about the rivalry, we just wanted to play the best game we could.”

Though the game started with the Marauders returning the opening kickoff for a touchdown, it was all downhill from there for the Marauders. The Panthers took off in the second quarter and dominated ball possession throughout. They forced three fumbles throughout the quarter and recovered two of them, both resulting in touchdowns on those possessions. 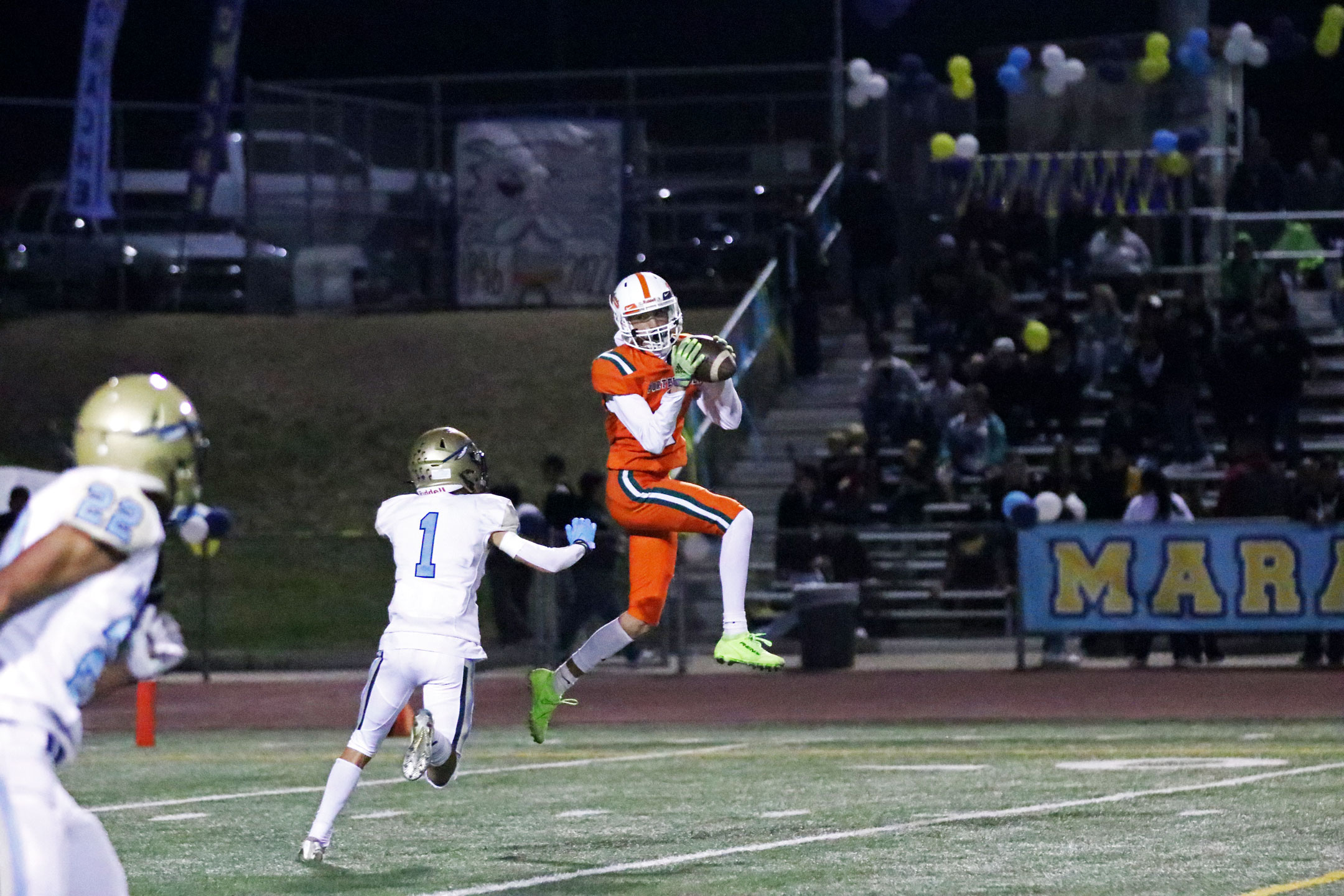 Cooper Fish leaps away from a Monache defender to catch a ball near the goal line during a win over their rival. Photo by Claire Livingston

Quarterback Rocky Arguijo had an excellent game, getting the ball to six different players for the eight touchdowns. The offensive line held firm, allowing Arguijo time in the pocket to get the ball down the field to his receivers.

Running back Samuel Alcantar had two touchdowns. He made several key plays to run the ball down the field and set up the Panthers to score. His most impressive touchdown was the second of the game, a punt return of 60 yards just two minutes after the Panthers’ first touchdown.

“He ran the ball well for us,” Thompson said. “He gave us some strong runs.”

The Panthers defense played so well, they barely spent any time on the field after the Marauders’ first touchdown. They were so efficient in stopping the Marauders that they forced multiple fumbles and recovered them, putting the offense in excellent position and allowing Porterville to dominate possession of the ball. 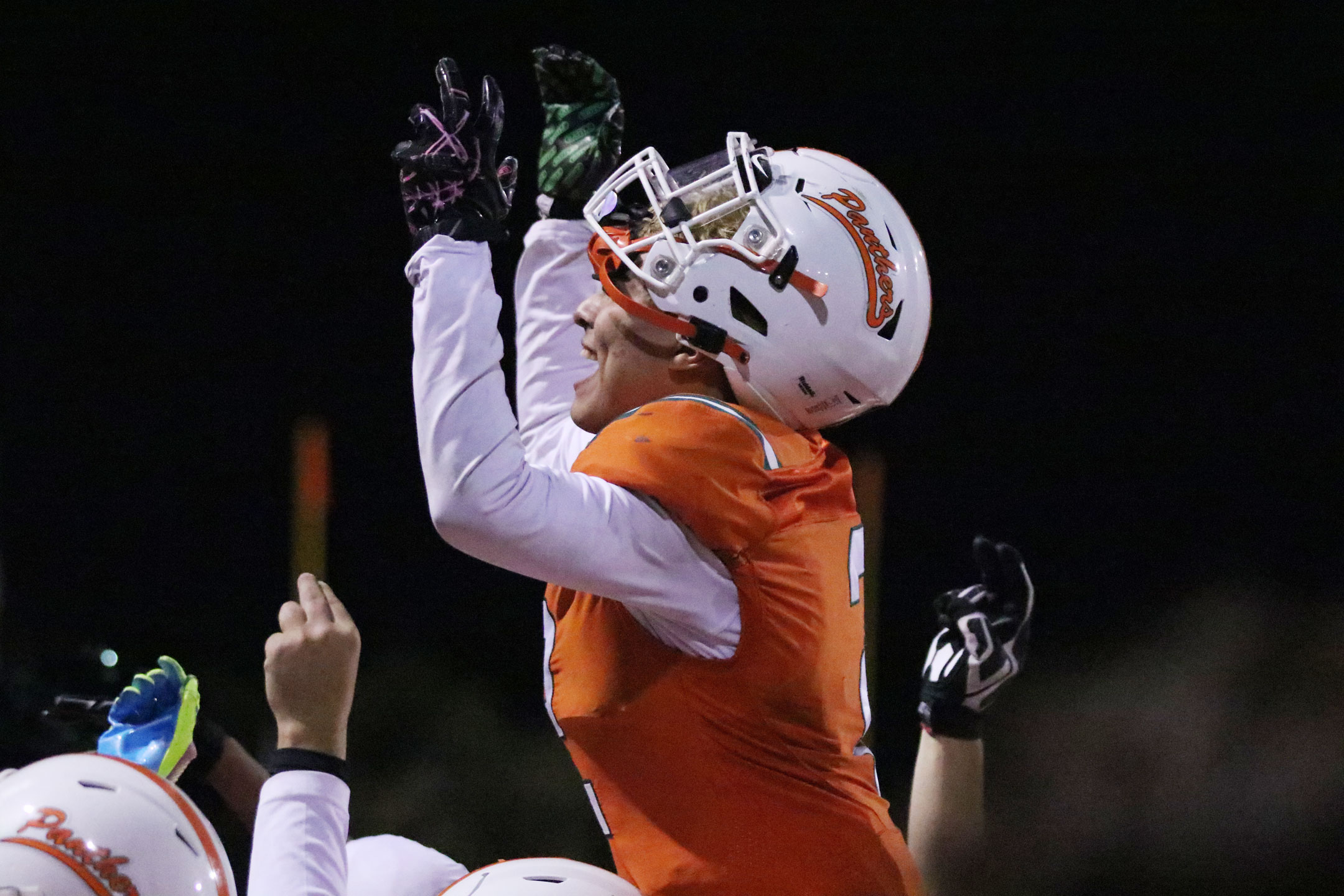 Alfredo Nunez raises his hands in victory following the win over Monache on Friday, Oct. 28. Photo by Claire Livingston

The Marauders struggled with penalties and turnovers throughout the game and lacked the possession opportunities to score. They opened the game strong with a kickoff return for a touchdown, but struggled to hang onto the ball after that.

“A couple of penalties and turnovers really put us behind the eight ball,” Monache head coach Shane Focke said. “[Porterville is] a good football team that capitalized on every single thing that we handed them. My hat’s off to them.”

The game was briefly interrupted in the third quarter when a spectator in a Halloween mask ran onto the field. He made his way in between the players setting up for a play and stole the ball from the line of scrimmage before running off. Monache’s Armani Rodriguez chased him down and tackled him, allowing security to escort the runner off the field. Play resumed shortly after.

It was the 53rd Granite Bowl in the history of Porterville and Monache’s rivalry and Porterville has held onto the rock for three years now. The blowout score almost mirrors the 2019 game in which Porterville won 61-6. Last year, the Panthers only edged out the Marauders 14-12.

The Panthers are currently second in the East Yosemite League, only losing one league game to the number one team, Redwood. Heading into the playoffs, they plan to continue their strategy of taking it one game at a time, treating every game like the most important one.

“We have one goal in mind,” Thompson said. “It was never to beat Monache, never to go 9-1. The goal is to be the last team standing in the end.”

The brackets for playoffs will be released on Oct. 29.