VISALIA – Buddy Jones danced to the beat of his own drum for over 80 years, and is now set to receive an award that will honor his life achievements and his dedication to fostering community.

Some know local artist Buddy Jones for his drum circles, others know him for his wood art, and yet, even more know him as the man who sends loads of rice to the village of Oroko, Africa through fundraising. Jones also founded one of the most successful Black-owned contracting businesses in Sequoia, Kings Canyon and Yosemite national parks. His artistic hands have touched the community in more ways than one, which has led him to receive the Marjorie Brandon Award. This award is given every year to honor local artists who go above and beyond to benefit the community. The award ceremony will be held on Saturday at 7 p.m. at the Center for Spiritual Living.

“If you’re a black child from a family of nine, our father was a garbage collector, and you’re in the ghetto, what are the chances of you getting out of that? So I say the story is, how does one beat the odds?” Jones said. “The story of me being congratulated by George Bush for the work I did in the parks is a long way from the ghetto.”

Jones was quite literally congratulated by then-President Bush in 2002. Jones’s story began in the east side of Riverside, Calif., where he lived with his parents and eight siblings. As a child, his mother would take him to the National Parks, which is where his love for the outdoors began to flourish. Early on, he noticed that the parks had very few Black visitors, according to Traditions of the Ancestors (TOTA), a cultural information organization that partnered with Jones in order to bring cultural activities to Visalia. Fast forward to the early ‘90s, nearly 50 years later, when Buddy Jones Contracting was born.

Buddy Jones Contracting was one of few highly recognized Black-owned businesses working for the local national parks. It went from a company that grew from “two to 65 employees and grossed over $30 million” between 1994 and 2003, according to TOTA. Buddy built a train depot in Allensworth State Park and started an historic touring program that celebrates Allensworth and the contribution of African American contractors to California’s national parks. He even has a touring service.

Jones had a long journey to get to where he is, but is encouraged when he looks back on where he came from. His father had a third grade education, while his mother Geraldine had a sixth grade education. Jones looks at his two grandchildren, one who is pursuing a degree to become an environmental issues attorney, and the other pursuing mechanical engineering in physics. To Jones, remembering where you came from is a huge deal. 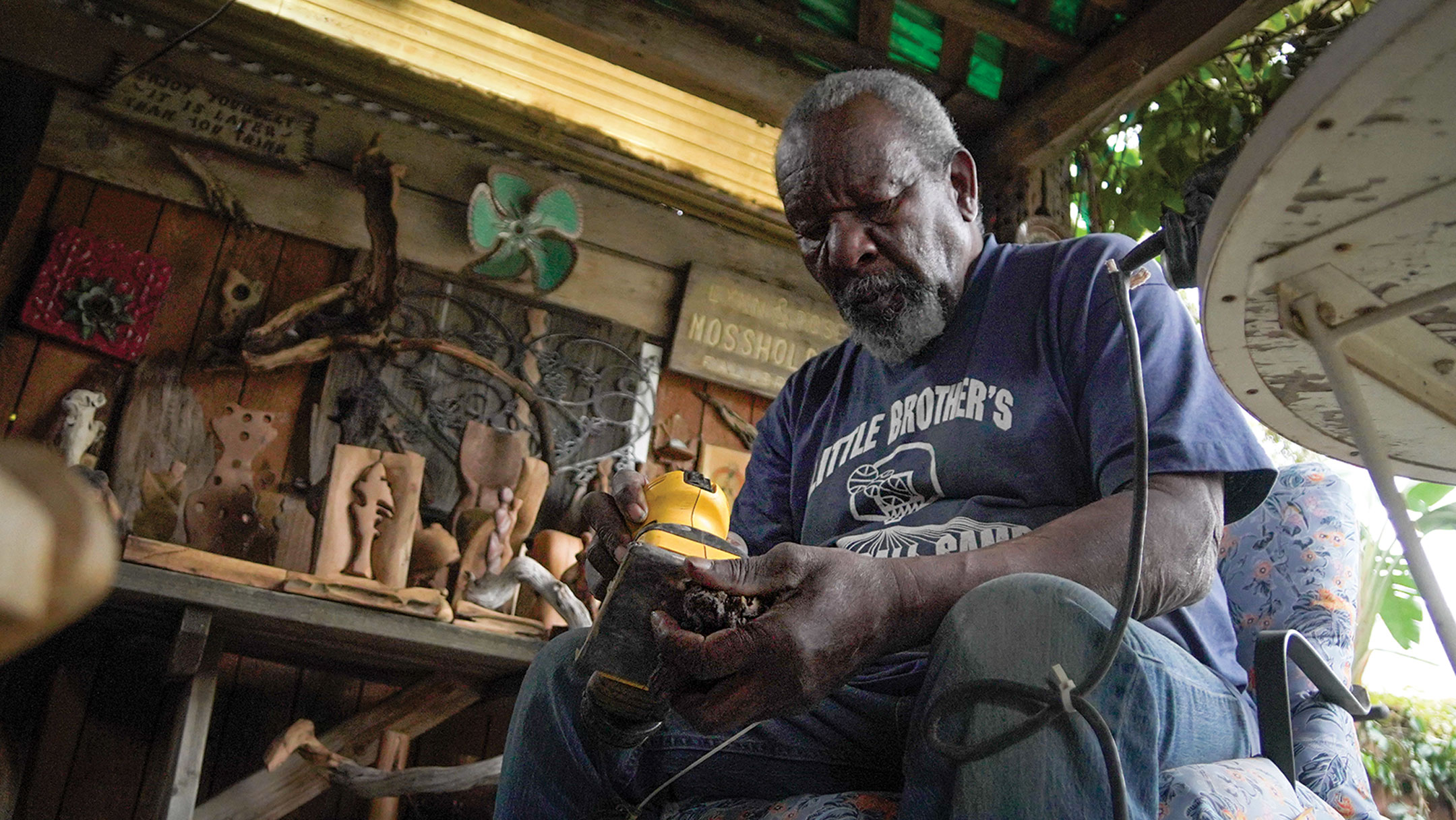 Buddy Jones looks over some of his artwork in his studio. Photo by Rigo Moran

His wife, Lori, and he teamed with TOTA to organize a cookoff event in Visalia that featured African drumming workshops, art and local food vendors. More than 3,500 people attended the event, which Jones noted there were more Black people in attendance than he can remember in all his years living in Visalia, according to TOTA. This spoke to Jones, especially amid a time of racial divide in the country.

“[The city] didn’t think anybody was going to come, but 3500 people showed up,” Jones said. “That’s every size, shape and color, from all over as far away as Bakersfield, Fresno. They came from all over, and it was just unbelievable.”

Jones championed environmental activism and was involved in multiple community-building organizations and events in the Visalia area. He was even part of the Boys & Girls Club of Tulare, the Tulare Rotary Club, and the California Black Chamber of Commerce, “from whom he has received a bevy of community service awards,” TOTA stated. Additionally, Jones will be building a wood sculpture in downtown, an area that has roughly zero Black business owners, and very little representation.

Jones also founded “Buddy Jones & Friends,” which is an organization that seeks to bring cultural diversity and activism. The organization hosts activities such as West African drumming, construction, wood art, storytelling, food and African American history. It’s for all ages, especially youth in culture and art. He has been drumming for a long time and does so with expert local drummer Keio Ogama and her husband, master drummer Wadaba Kourouma from Guinea, West Africa.

Buddy leads a drumming circle at the Heritage Cultural Foundation and has held drumming circles at the Center for Spiritual Living (where he will receive the award) and at ImagineU Children’s Museum. Wadaba Kourouma and Jones work together to fundraise for multitudes of rice bags for the residents of the Oroko village. 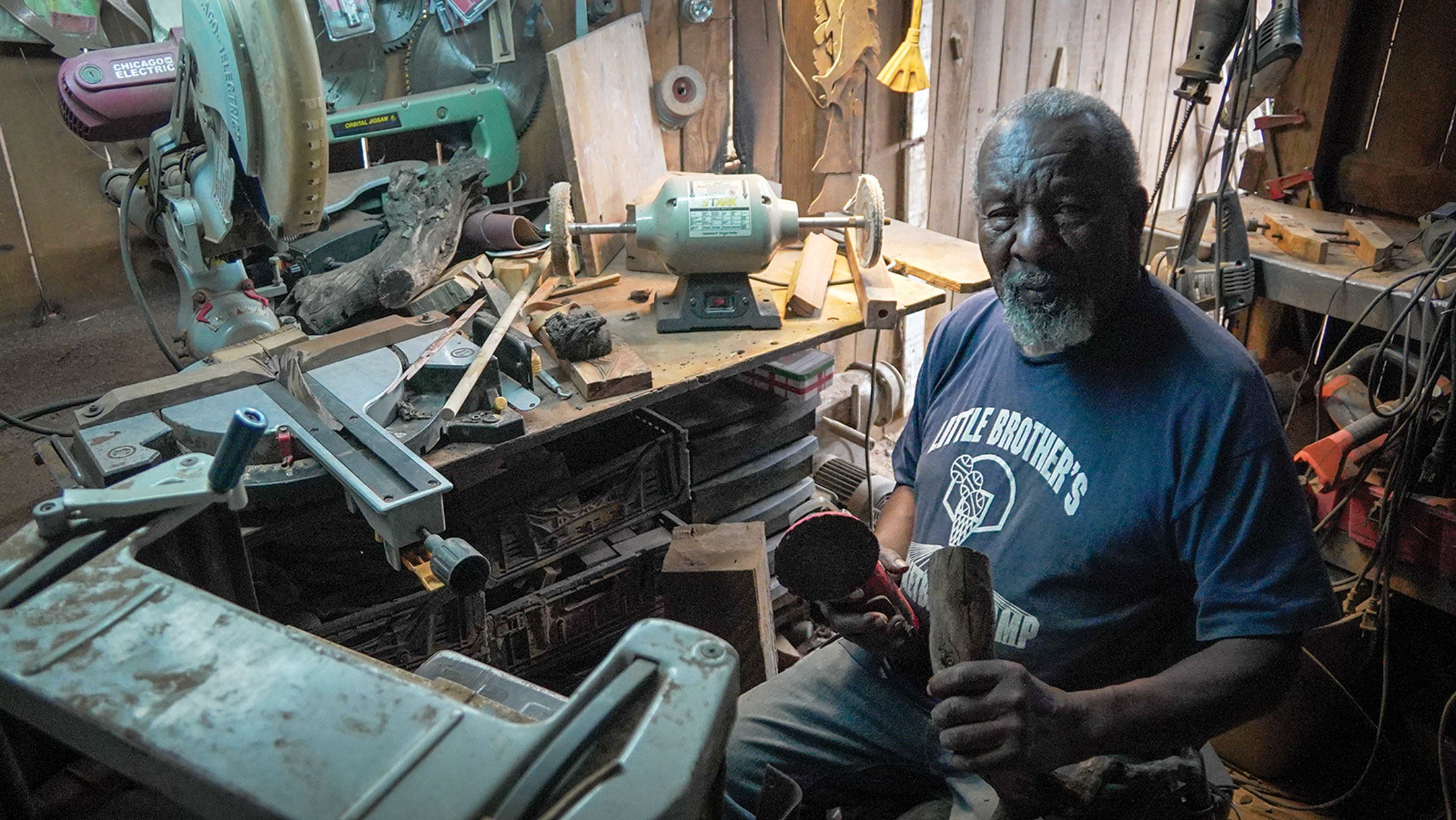 Buddy Jones will be honored with the Marjorie Brandon Award on Saturday, Nov. 5 in Visalia for his career of artwork in Tulare County. Photo by Rigo Moran

At the award ceremony where Jones will receive the Marjorie Brandon Award, there will be a slide show about Buddy’s life, a dessert auction, and a concert of classic 50s hits by Deanna Saldana, who has toured professionally, and Bruce Huddleston, one of the founders of the High Sierra Jazz Band.

The award and the center the ceremony will be held at is named after Marjorie Brandon, a living testament to the staying power of positivity. Brandon, who passed away just a month before her 110th birthday in August, is a long-time artist and teacher, and an icon in the local art world. After a 25-year teaching career in Visalia and the surrounding area, she turned to art and began creating collages. She led the creation of the Center for Spiritual Living, a place that welcomes all faiths and preaches about unity of all faiths in a single God living within each of us.