SOCCER: Cardinals kick off soccer season with a win

LINDSAY – The Lindsay Cardinals’ boys soccer team’s 5-1 victory over the East Bakersfield Blades came as the first test of the team after 12 seniors graduated last year.

The Cardinals lost 12 seniors last year and only had one returning starter for this season, but despite that, the program appears to be strong. They showed up to the first game prepared to play the way they have practiced and succeeded in scoring five goals and only allowing one.

“I’m really proud of the way we showed up and created chances,” Lindsay head coach Tony Godoy said. “I was telling the guys, win or lose, if we’re creating chances for shots on goal then we’ll be fine.”

The Cardinals had little issue keeping the ball away from the Blades and moving up the sidelines to attack the Blades’ goal. With persistence and strong defenders, they were able to keep the Blades from attacking their own goal too much, holding them to just one point throughout the game. 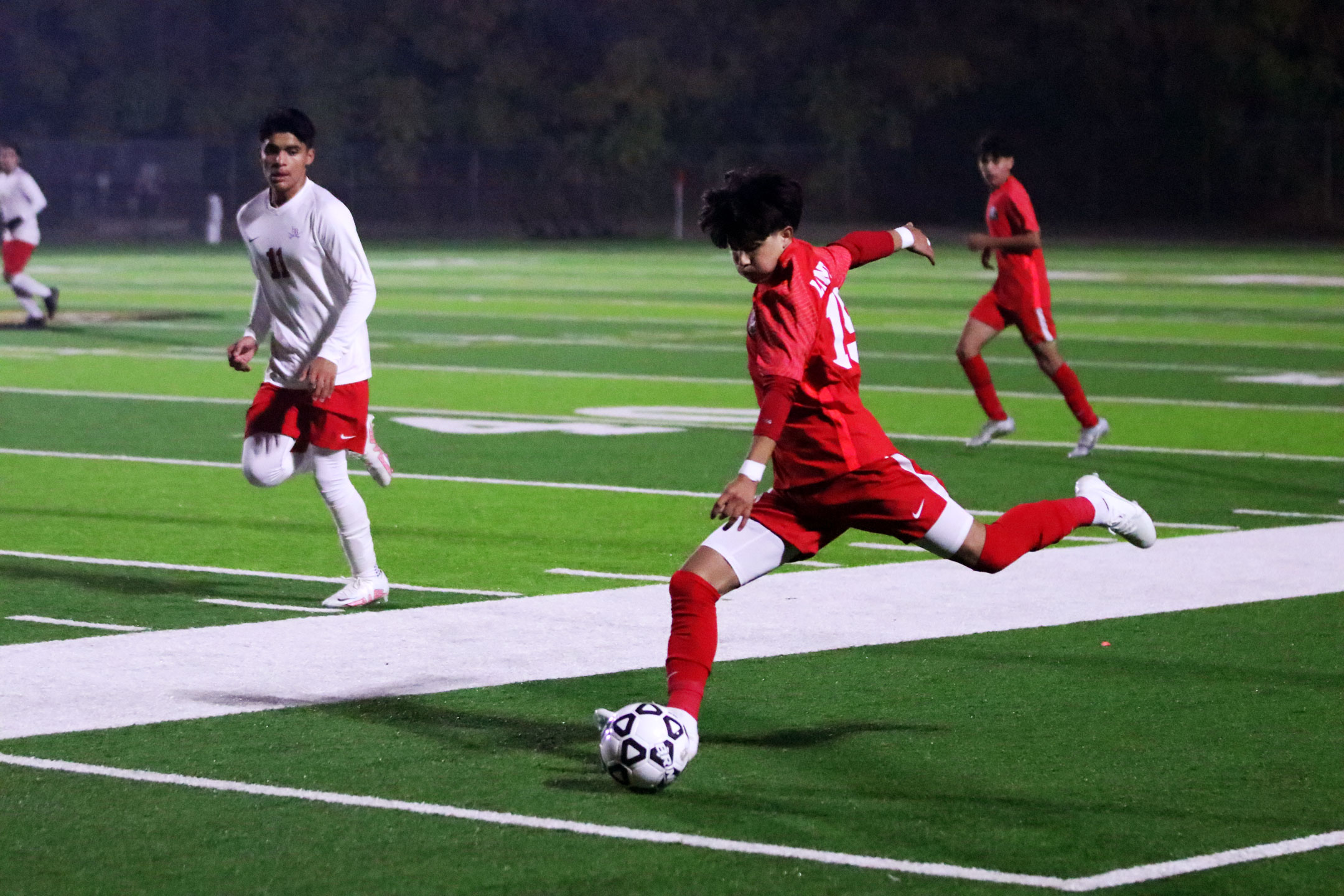 Cardinal player number 15, prepares to score a goal with no defenders near by. Lindsay made themselves available for shots and took them every chance they got, winning 5-1 against opponent East Bakersfield Blades.Photo by Claire Livingston

This was the first game of the season for the Cardinals, who came off a 21-4 overall record last season. They finished second in the East Sequoia league and were knocked out of the playoffs after a 2-0 loss to Garces Memorial.

Since the majority of starters from last year graduated, younger players have had to step up. Though they did their best to scrimmage with the JV team, this game against East Bakersfield was the first real test for the young Cardinals. The two top seniors from last year were center midfielders and the team now has sophomores stepping in to fill those positions.

“The three sophomores that rotate into those positions have worked hard so far over the season,” Godoy said. “They leveled up from last year to this year and a lot of pressure is on them.”

Andres Perez is one of those sophomores. His older brother, Daniel Perez, was one of the center midfielders that the team lost last year and Andres has stepped up and worked to grow as a player in his brother’s absence. He hit the weight room hard during the offseason and is one of the players to watch this season.

The other player to watch is senior Manuel ‘Junior’ Martinez. He plays right wing and is one of the team’s top scorers. As a senior, he’s one of the most experienced players on the team and is definitely one of the leaders to the younger players. 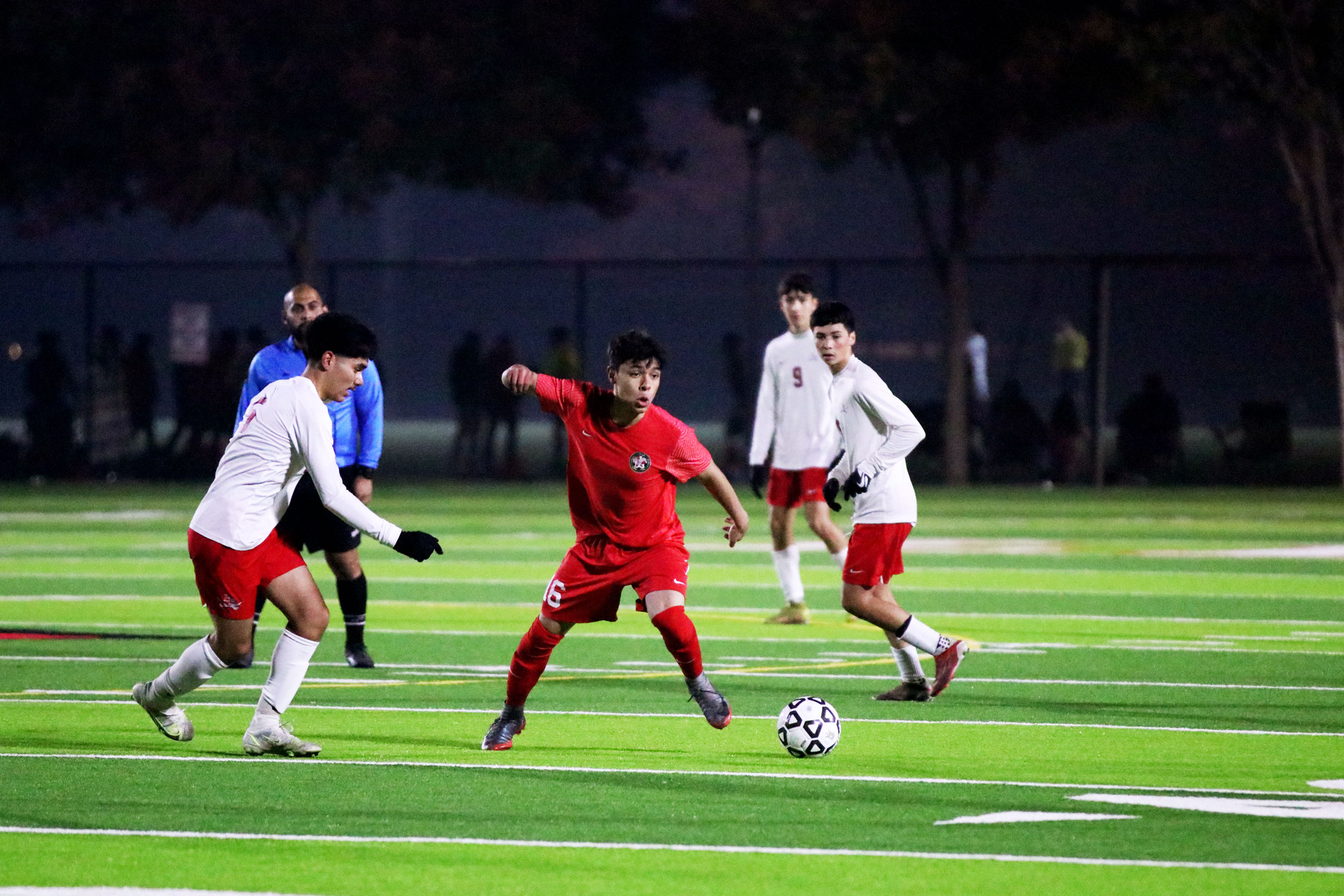 Cardinal player number 16 sees the ball and changes direction to go after it before an opponent. Lindsay lost the majority of their starters from last year and younger players have had to step up and own the responsibility. Photo by Claire Livingston

The Cardinals are facing their toughest schedule in program history. Their next four games are facing Mt. Whitney, Tulare Western, Redwood and Golden West. They will play eight non-league games before playing in a tournament the second weekend of December, right before league play begins. During league play they will also face a few more non-league teams. They will play 27 games in the regular season.

“We have a real easy philosophy, just open up the game as much as you can and play on the wings,” Godoy said. “90% of our attacks are on the wings and we have the players to play that way.”

The Cardinals’ next game will be against Mt. Whitney on Nov. 15 at home.