Exeter’s city manager says there are no plans to have the Tulare County Sheriff’s Office enter the city and act as law enforcement, nor has it ever been on the table

EXETER – The Tulare County Sheriff’s Office will not be taking over operations for Exeter Police Department, despite rumors circulating on social media.

During an Exeter City Council meeting on Nov. 8, residents voiced their concerns over competitive police pay for the Exeter Police Department (EPD) after three patrol officers moved to the Tulare Police Department this year. Just before the meeting, rumors circulated on social media stating the Tulare County Sheriff’s Office would have to act as the city’s law enforcement if staffing issues worsened, however, TCSO’s public information officer Ashley Schwarm said the claim is inaccurate, as the sheriff’s office has not been approached about entering the city of Exeter, and confirmed that TCSO has a good working relationship with all city agencies in the county.

Currently, there are 20 approved and funded positions for EPD, with 10 of those being patrol officers and the rest being sergeants, lieutenants, two records clerks and a community services officer, according to Exeter city manager Adam Ennis. Since the three patrol officers left, two positions already have candidates going through medical evaluations and background checks, according to Hall. That leaves only one of the patrol positions with no viable candidate.

Competitive pay was addressed by the Exeter officers’ union, the Exeter Police Officer Association (EPOA), who had written a letter to the city council and presented it on Nov. 8, stating more funding was needed in order to keep police officers. EPD’s current salary agreement saw a 2.5% increase plus a uniform allowance last year, after the city of Exeter did salary negotiations in the spring of 2021, according to the memorandum of understanding between the city and the EPOA. The contract will increase pay by 2% every year until the contract expires in 2024. On the Nov. 8 city council meeting agenda, the closed session item, which was discussed before public comment, was about salary negotiations with EPD.

“Council directed me to get some information together for some potential options,” Ennis said.

Exeter’s city council had been deliberating on how to navigate higher pay for officers, according to Ennis, but currently about 70% of the city’s general fund is going toward public safety, according to the city’s budget documents. 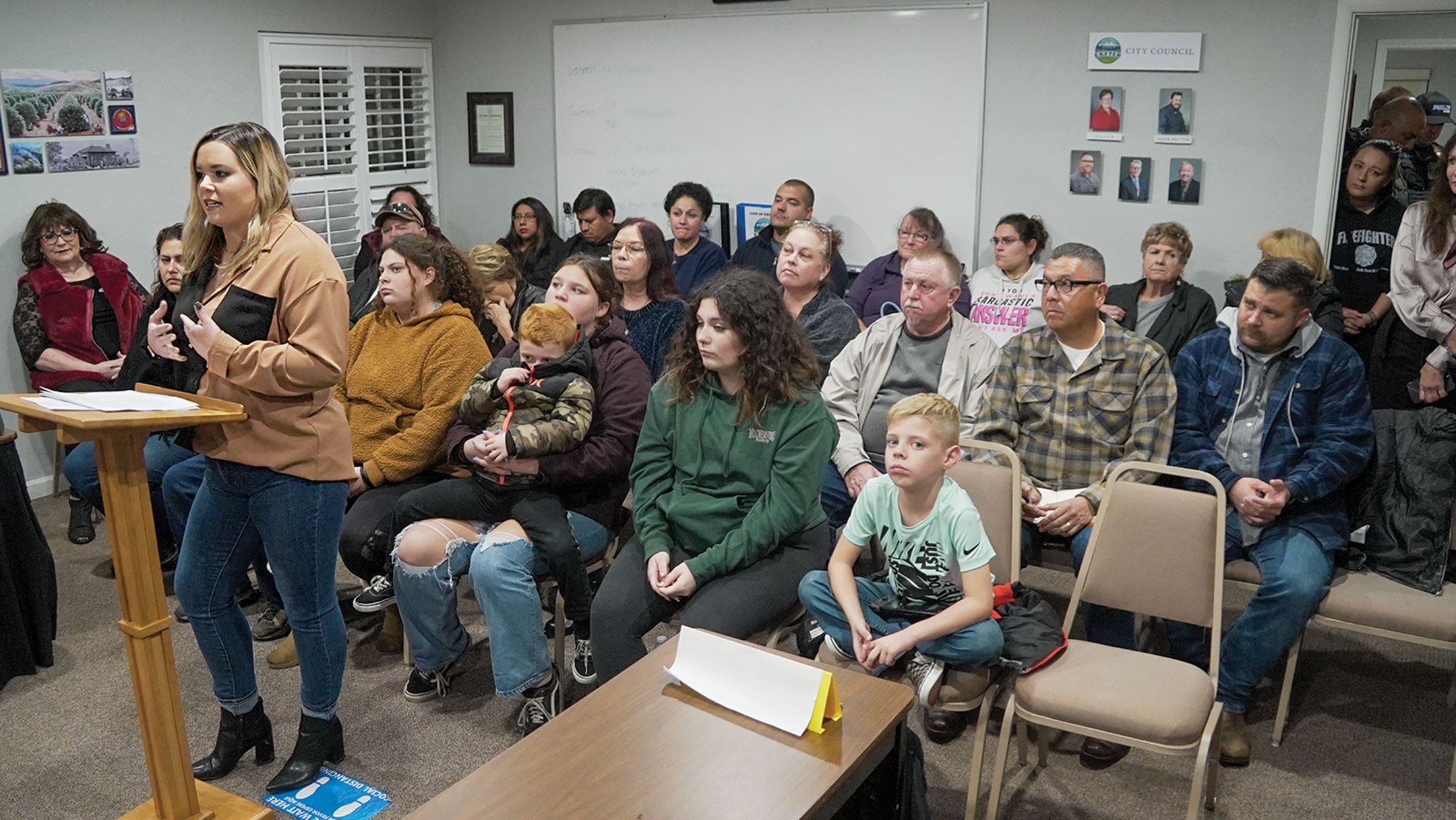 Several Exeter residents gathered on Nov. 8 to show their support and speak their minds to members of the city council. The council discussed salary negotiations with EPD in closed session, which was discussed before public comment at the meeting. Photo by Rigo Moran

Other sources of funding for public safety is Measure P, the city’s 1% sales tax measure passed in 2020, and the Citizens’ Option for Public Safety (COPS) state grant, according to the documents. The school district also pays for the community services officer during the school year, while the city funds the community services officer during the summer.

Ennis said that the other funds in the city are only to be used for specific purposes and the city is not allowed to pull from them for other areas. For example, enterprise funds cover water, sewer and sanitation, which is one of the city’s largest funds. Additionally, the city’s road fund cannot be used elsewhere. This rule applies for all funds other than the general fund, according to Ennis.

“[City council is trying to] do everything they can where they can. Obviously, they value all the city’s employees,” Ennis said. “The part that they have to figure out is how do you balance all of it.”

Hall said that filling the current vacancies should come before adding on any new positions, and that EPD is doing well in terms of equipment. Ennis stated that much of the struggle with salaries this year have come from inflation, which is up by 7.8%, according to the CPI Inflation Calculator.

Exeter is a city of 10,558 people, according to the city. This makes Exeter a comparable city to Lindsay, Farmersville and Woodlake, which all range from roughly 7,000 to 12,000 people, according to population data from the United States Census Bureau. Within these cities, Exeter has the highest paying police department, averaging 3.4% higher than Woodlake, according to Ennis. The lowest starting salary for EPD is $55,932.

Woodlake city manager Ramon Lara said Woodlake is “dealing with similar issues when it comes to recruiting new officers and maintaining staffing levels,” as the department has two vacant positions. The Woodlake Police Department currently has 14 sworn officer positions, with 12 being funded by the general fund, one through the COPS grant and one through a city tax measure. Currently, Woodalke’s department consists of a chief, one lieutenant, two sergeants, five officers, and one clerical personnel, according to the city of Woodlake’s website. Woodlake’s starting pay for officers is roughly over $54,000.

“All agencies are competing for the same applicants and the smaller cities simply cannot compete with the salaries offered in the larger cities,” Gomez said.

Lindsay has a unique approach to public safety, and has a combined police and fire department, where officers act as both policemen and firefighters. When the city merged their fire and police departments in 2011, they had 25 staffed officers to meet the needs of both public safety areas. This year they have 18 officers, including the chief of police. Their public safety officers start off at roughly $50,000 annually.

The city of Tulare is where the majority of the former Exeter police officers left to, and it is a city of 70,733 people, which is much larger than Exeter and its comparable cities, and has 75 officers, according to Tulare city manager Marc Mondell. The Tulare police Sgt. Rosa Moreno said that an average shift has seven officers and one sergeant, and there are two lieutenants that oversee the patrol division. Tulare funds their officers through Measure I, the city’s sales tax, and uses 40% of their general fund for officers, compared to Exeter’s 70%.

In the Nov. 8 city council meeting, residents were concerned over crime rates in Exeter. According to the Federal Bureau Investigations crime data, Exeter’s violent crime hit 31 reported cases in 2016, and dropped to only 16 cases in 2018. Then, three years later, violent crime cases climbed to 32 in 2021.

According to the FBI database’s Uniform Crime Reporting (UCR) Program, crime is a “sociological phenomenon influenced by a variety of factors,” such as geographical and economic conditions, and is not always a reflection of the effectiveness of law enforcement in a city. Though crime statistics are a good indicator of crime fluctuations, without considering all of the variables that contribute to crime before looking at the data “the available data can be deceiving,” according to the FBI database.

“There’s a number of contributing factors [for crime],” Hall said. “We always want to look at Exeter and compare it with Exeter to see how we are doing in terms of last year, or previous years, but we can’t look at that data in a bubble and not be cognizant of what is happening in the rest of the country, in terms of crime rates, recidivism, all of those things.”

Researchers from The Brennan Center for Justice (BC), which is a nonpartisan law and policy organization, did an analysis on the FBI database, and found that the reasons for spiking crime throughout the United States was extraordinarily complex, and urged the public and policymakers to not “jump to conclusions or expect easy answers,” according to BC researcher Noah Kim and justice counsel John L. Neu.

According to the analysis from BC, homicides rose in “cities nationwide and jurisdictions of all types,” and this isn’t just in cities, it is also largely in rural America. The Center of Disease Control (CDC) reported that homicides in rural towns throughout the nation rose 25% in 2020, barely trailing behind metropolitan cities that spiked to 30%.

“Crime is complicated, and attempting to isolate a single factor to explain crime trends, especially during a once-in-a-century global pandemic, would be a mistake,” stated the BC researchers Kim and Neu in the analysis.

Not all crime went up, though. Homicides made a major rebound which has not been seen since the 1990s, but property crime has been at an all time low, according to Kim and Neu. The divergence in crime rates hints to a more complex and puzzling answer as to why homicides and violence have gotten higher in rural areas. The analysis suggests a variety of issues that have affected crime rates, such as the COVID-19 pandemic leading the nation into a recession, racial division and unrest between police and communities due to recent events, according to Kim and Neu.

Tulare PD’s lowest violent crime year was 2016, where 224 cases were reported. That number has increased steadily to 300 cases in 2020, according to the FBI database.

Ennis said for TCSO to enter the city and run law enforcement operations, the city would have to approach TCSO first, and the two would enter into an agreement with each other. This happens when a city does not have adequate staffing for departments, such as police and firefighters. Hall said that if this were to ever happen, it would not be a process that would happen overnight, but would involve meetings with the city, TCSO and would also need approval from city council.

Ennis said that there has not even been a conversation within the city to go into an agreement with TCSO to take over, which Hall echoed. Ennis said that local agencies, such as Woodlake, Lindsay and Farmersville, all help respond to each other’s calls if necessary. Exeter will in turn do the same for those city’s too, when needed. TCSO also does the same for nearby agencies.

“Even with the the turnover that we’ve experienced over the last couple years, due to retirements and people going to other agencies, we still have an outstanding department with some of the absolute most phenomenal men and women in law enforcement, and they are committed to providing exceptional service to the community, and they go out and they do a great job every day, and that’s going to continue,” Hall said.