Gang member Myles Gonzales earns himself a life sentence after premeditated attempted murder, assault with a firearm toward multiple victims

VISALIA – Myles Gonzales had injured three people during a shooting in 2020, earning him multiple felonies and a one-way ticket to prison.

On Dec. 1, Gonzales, 20, was sentenced to life in prison after his involvement in two separate shootings in 2020. The shootings took place at the Mary’s Vineyard shopping center and at the Relax Inn, both located in Visalia. 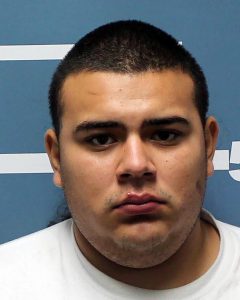 On Dec. 8, 2020, Gonzales was inside a Little Caesars at the Mary’s Vineyard shopping center in Visalia. He was joined by two other males, with one being a juvenile. Three adult males walked into the Little Ceaser’s shortly after, and were all former gang members known to the assailants. This led to a verbal altercation.

As the argument escalated, Gonzales fired several shots from a 9mm handgun, wounding the three victims, who were transported to the hospital where they recovered. The assailants fled but were taken into custody shortly after an investigation by the Visalia Police Department (VPD), and Gonzales was taken into custody on Dec. 17.

During VPD’s investigation, it was revealed that Gonzales was also part of another shooting on Nov. 22, that took place at the Relax Inn. He had shot at three other men over a gang-related altercation as well, however, no one was injured.

For the shooting at Little Ceaser’s, Gonzales pled guilty on July 28, 2022, for deliberate, premeditated attempted murder of three victims with the special allegations of discharge of a firearm, which caused great bodily injury. Additionally, he pled guilty that the crime was for the benefit of a criminal street gang and gang conspiracy.

For the Relax Inn shooting, Gonzales pleaded to assault with a firearm of three victims with the special allegations that he used a firearm, and that the crime was for the benefit of a criminal street gang. He also pleaded to discharge of a firearm with gross negligence, and that the crime was committed for the benefit of a street gang, as well as the use of a deadly weapon. All crimes are felonies.