SACRAMENTO – As the state is looking for ways to help throughout the ever-present drought, a small town with no more than 600 residents expect to have their water problems solved by the end of next year.

The unincorporated community of West Goshen has been awarded $3.4 million from the Department of Water Resources (DWR) to connect 50 households to the nearby public water system, California Water Service (CAL Water) Visalia. The community is no stranger to water struggles, as half of the community was previously connected to the CAL Water system in 2016, according to Daisy Gonzalez, community solutions coordinator with the Community Water Center (CWC). This funding comes as a huge relief and is enough to see the project all the way to the end.

“We’re excited that this project was granted this funding source,” Gonzalez said. “This funding is specifically for drought impacted communities. So it’s meant to move a little bit faster, because these are folks that are in an emergency situation where they’ve lost water supply, or are at risk.”

West Goshen is facing a public health emergency due to water quality and supply issues in the system of private wells serving the community. Currently in West Goshen, there are 30 parcels of land, serving anywhere from 50 to 60 homes. Over the span of 1.2 square mile community, residents are struggling with a variety of issues ranging from completely dry wells, to contaminated wells to even severe lack of pressure from nearby agricultural irrigation, according to Gonzalez.

The decision to connect to CAL Water was not difficult as half of West Goshen already has been connected in recent years. The connection should not be a long process because CAL Water already has a pipeline covering a majority of the area due to the previous connection. All that has to happen now is connecting the remaining homes to the current pipeline.

Gonzalez said after receiving the grant funding, the next step is to do an environmental evaluation and get all the engineering plans in line. They expect to break ground in the summer or fall months next year, which would put the completion date some time before the end of next year. 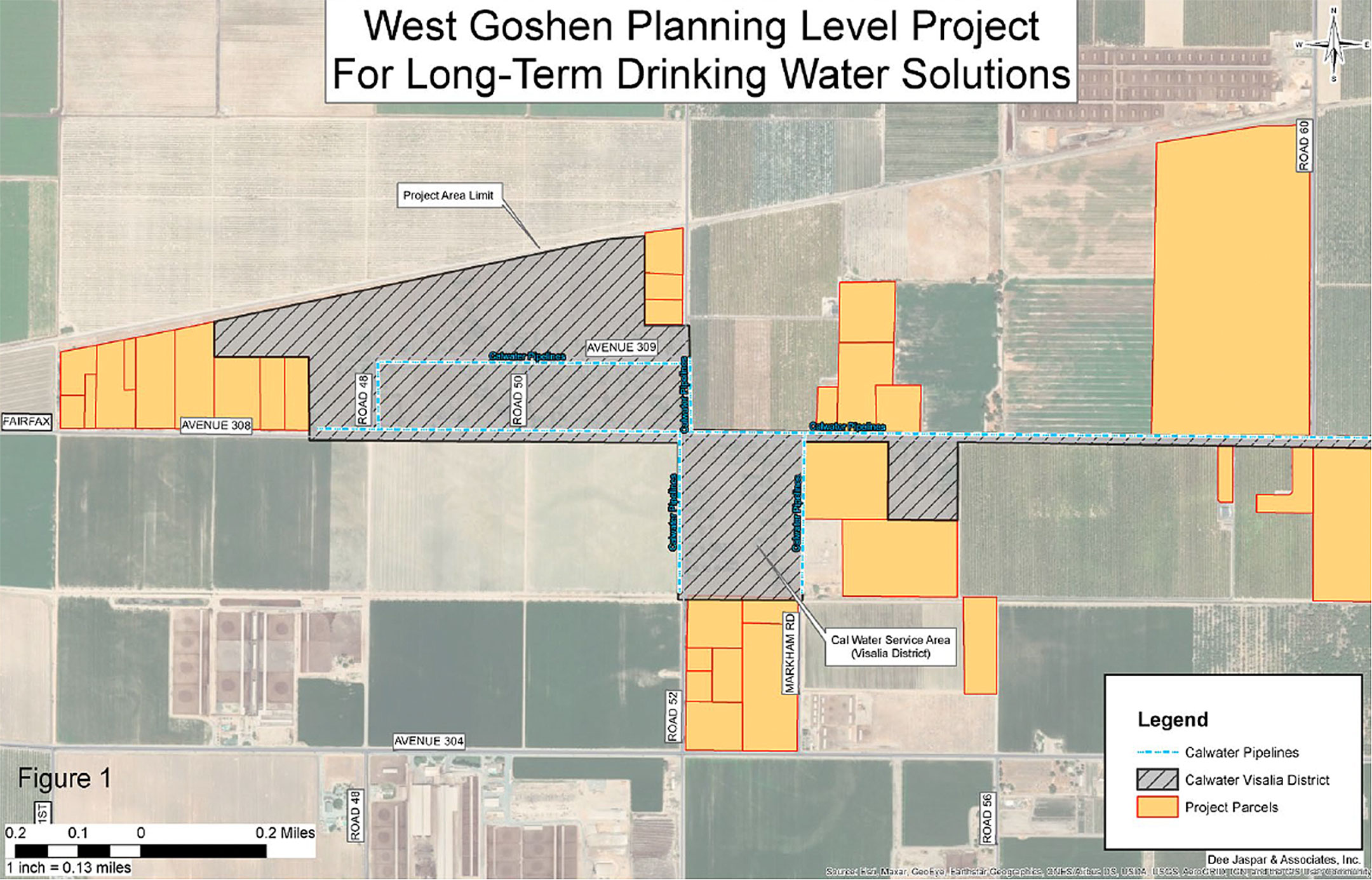 A map of West Goshen showing the already existing CALWater pipeline in blue. The community will connect the reaming parcels of land, in yellow, to the pipeline. Map provided by Community Water Center

“Small communities are the most vulnerable to the impacts of our new hotter, drier climate and lack the resources to immediately deal with these challenges,” Karla Nemeth, DWR Director said. “These continued investments from the state strengthen local partnerships to provide reliable drinking water for all Californians because everyone has the human right to water.”

Over the past two years, the CWC has been evaluating the severity of the water issues with the help of a $200,000 grant from the State Water Board and Self-Help Enterprises (SHE). The grant was provided through voter approved Proposition 1 funding. Proposition 1 was designed to incentivize local collaboration to implement innovative multi-benefit projects that build local climate and water supply resilience as well as conserve water according to a press release from DWR.

Gonzalez said 2020 was when CWC really began evaluating which option would be the best answer for the community. That is when they were awarded the $200,000 through the Integrated Regional Water Management Program (IRWM). West Goshen was not alone in this search for a solution. In 2020, DWR awarded $211 million to 42 IRWM regions. The funding was for the implementation of over 200 projects including approximately $25 million for projects benefiting disadvantaged communities.

Within the two years of research, West Goshen determined they had three options: find ways to repair wells, build a new private system or connect to CAL Water. CAL Water was the most fiscal and reasonable choice according to Gonzalez. Fixing the wells would require treatment of the contaminates as well as possible re-drilling for others. As far as creating a completely new system for all the homes, Gonzalez said it was not reliable because it hadn’t been done before, allowing perhaps too much room for error.

Once the project is completed, and wells have been disconnected to eliminate possibilities of cross contamination, residents have the option to either keep or destroy their current wells. If they determine they want to destroy their old wells, Gonzalez said there is available state funding to help with that process. Usually to destroy a well, it must be taken apart and filled, not allowing for any future use according to the CA Department of Water Resources. However, if residents wish to keep their well for purposes other than drinking, like irrigation or for agricultural reasons, that will be an option as well.

Currently, Gonzalez said there are seven wells feeding 10 homes that have gone completely dry. Residents in those homes are being taken care of by SHE.  They are providing water storage tanks as well as bottled water. SHE is also providing bottled water for drinking and cooking for those who have contaminated water.  West Goshen resident Jesus Benitez has a 2,500 gallon storage tank filled every two weeks. He said the water in the tank is not suitable for drinking, so they deliver bottled water for cooking and drinking to him as well.

Nitrates can affect the body in many ways, by simply drinking contaminated water. It can cause a problem mostly for pregnant women and infants, as well as hypotension and diuresis, according to an informational sheet from the CWC. In addition to nitrate contamination, individuals can be exposed to uranium in the same way. Sensitive groups are children, pregnant women and those with compromised kidney function. Possible health impacts from ingesting water contaminated with uranium, is liver, bone and kidney damage as well as cancer. As far as 1, 2, 3 TCP goes, infants and children run a higher risk of sensitivity as well as those who live in agricultural areas. It can cause liver and kidney damage as well as cancer according to an info sheet from CWC.

In addition to contaminants, there are some residents who battle with farmers in the area. California farmers and dairymen struggle to get water just like everyone else, but their struggle is only heightened during a drought. Limits are placed on agriculture and farmers’ access to surface water is limited forcing them to pump more water from the ground according to Gonzalez.

As a result, residents like Benitez struggle to do regular day-to-day activities. When farmers are running their industrial ag wells, those who have shallower domestic wells are unable to access the water they need. The water pressure is not enough and prevents anyone from doing things like laundry or bathing. Connecting to CAL Water will help eliminate these types of issues and put everyone in a better place in West Goshen.

“This is a good thing,” Benitez said. “We’ve been pushing that project for the last two years.”

West Goshen was granted this funding as part of the Small Community Drought Relief Program. According to the DWR, the program looks to help the most vulnerable communities that serve fewer than 3,000 connections with aged infrastructure. DWR awarded $86 million to build water resilience throughout the state and Tulare County’s West Goshen was one of 23 projects that were chosen.  In Fresno County, the community of Mira Bella is experiencing similar issues to West Goshen.

Mirra Bella’s wells are drying up as a result of the ongoing drought, and they received $4.2 million. Their plan is to construct a pipeline from an existing water treatment plant to the community’s distribution system. The connection will support water supply resiliency in the area, but in the meantime, water will be hauled into the area to provide a temporary solution.

While California continues to make investments in water infrastructure to plan for more frequent, intense droughts, it is also critically important that all Californians do their part to conserve water. Governor Newsom has called for a voluntary 15% cut in water usage and urges local water agencies to enact stricter mandatory restrictions where necessary.