A four-year-old crime warrants Bennie Valdez a third strike offense, putting him behind bars under a life sentence

VISALIA – Following two prior offenses, Bennie Valdez struck out on his chances by committing an attempted burglary and assault with a firearm.

On Dec. 20, Valdez, 27, was sentenced by the Tulare County Superior Court for a 2018 crime that earned him his third “strike” under the California Three Strike Law. This law can yield a defendant 25 years to life in prison following two prior offenses considered violent or serious felonies. Valdez was found guilty by a jury on June 28, 2022 for attempted first-degree burglary, assault with a firearm, brandishing a firearm and delaying a peace officer.

The jury also found the special allegations against Valdez true, that he was armed with a firearm and that he  personally used the firearm. Prior to his sentencing, Valdez possessed two previous strikes for assault with a deadly weapon in 2012 and burglary in 2014. According to current California sentencing laws, Valdez must serve 43 years, 8 months in prison before he can be considered for parole.

According to the district attorney’s office, the crime happened near midnight on Nov. 15, 2018. Officers with the Tulare County Police Department were dispatched to an apartment complex regarding an incident of a male with a firearm. Once they arrived at the scene, officers observed a male who matched the description of the subject – Valdez – who was detained. 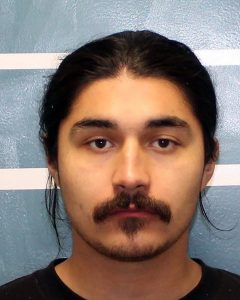 Witness and victim accounts obtained by police revealed that Valdez and another male approached three people who were standing outside of an apartment at the complex. Valdez pulled out a firearm and pulled back on the weapon’s slide, causing a round to eject and fall to the ground. The group of three ran into the apartment, but when one of the victims tried to shut the door, Valdez attempted to gain entry by pushing on the door and hitting the victim in the head with the gun twice.

During the crime’s investigation, which was conducted by the Tulare Police Department, Valdez was positively identified by the victims as the assailant of the attack. During a search, more ammunition was found on Valdez. At the time the incident took place, Valdez was already on bail for being a felon in possession of ammunition.

Additionally, before his June 28 trial, Valdez pleaded no contest to being a felon in possession of ammunition during a separate 2018 contact with law enforcement on June 16, 2022.