District Attorney Tim Ward swears his oath to serve the people, level out backlogged cases, be a louder voice for victims

VISALIA – After the pandemic shut down much of the world and created a hefty backlog in the criminal justice system, District Attorney Tim Ward pledges to be a voice for those victims who may feel lost in a crowded room.

On Dec. 28, Tim Ward was sworn in for the fourth time as Tulare County’s District Attorney. This time around, Visalia Mayor Brian Poochigian did the honors of swearing him in. In department 5 of the Visalia Court House, Ward was surrounded by his family, friends and coworkers as he raised his right hand and took his oath to defend the constitution and the people of Tulare County. The swearing in ceremony comes after his reelection in November and Ward has plans to continue not only supporting, but being a voice for the families of victims.

“I am again honored to lead the men and women of this office through what I believe are challenging times for prosecutors and law enforcement,” Ward said. “Where so many legislative and societal movements stand solely with the accused, we must never forget those whose violence damages and whose fruits of hard work are torn away by criminal conduct. It is our duty and our honor to stand ready for victims.”

With ever changing legislation, Ward said it can be a difficult task to continually keep up and he fears the victims’ voices are getting drowned out. Ward said California needs truth in sentencing, to stop changing rules for victims and to hold the California Department of Corrections and Rehabilitation (CDCR) accountable for what a sentence actually means. 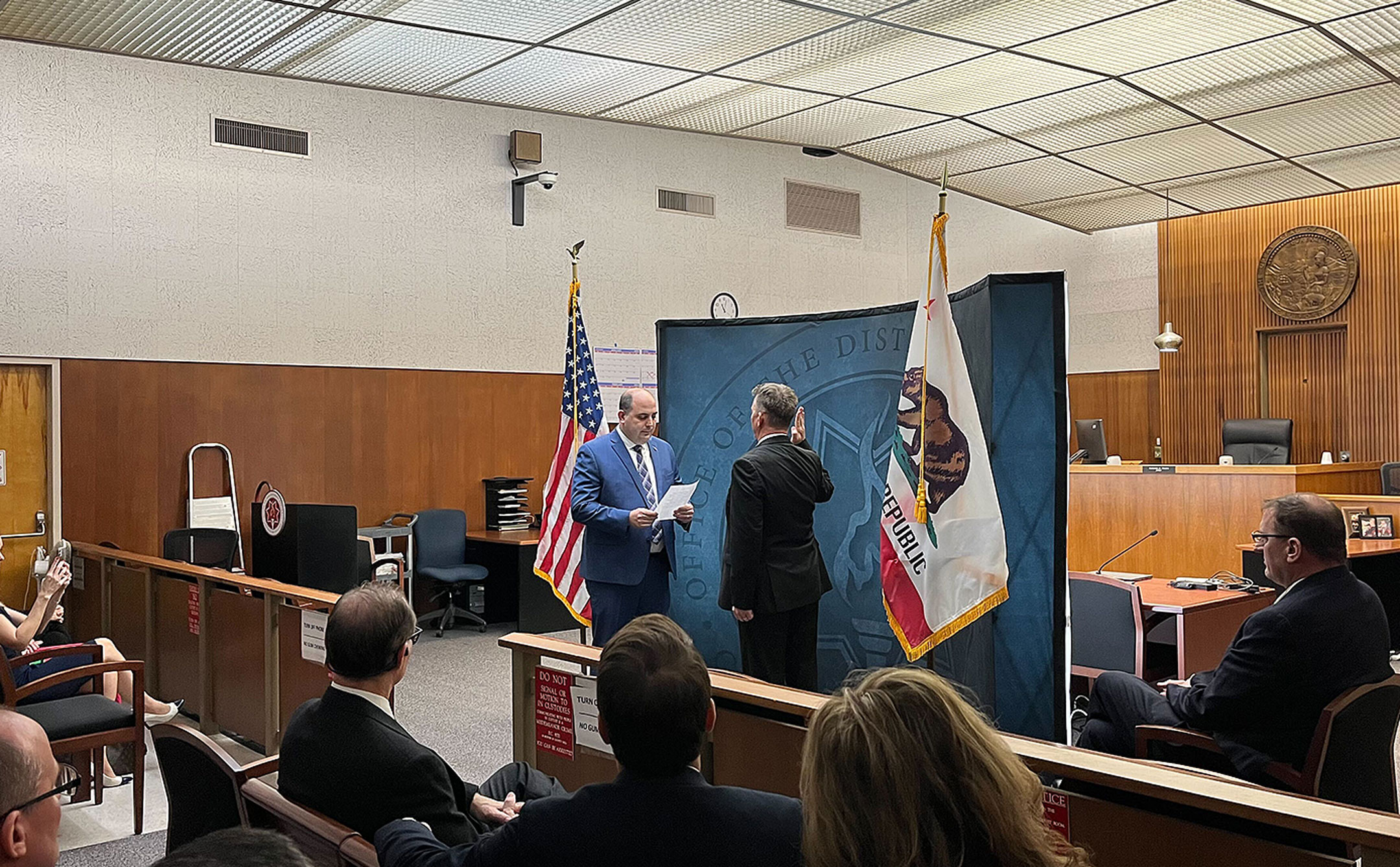 “We can focus on getting the real work done,” Ward said. “We’re going to continue to have a singular focus and make sure that victims and their families have a voice inside the criminal justice system.”

As far as current issues that will need to be focused on in the upcoming years, Ward said he will continue to focus heavily on the current “backlog” of cases that is plaguing the system. Only making the issue of backlogs worse, is the ever present labor shortage that is being felt around the country. As Tulare County is sitting at about 50% vacancies for deputy DA positions, Ward knows Tulare County is not the only one feeling the effects of the labor shortage.

“I think COVID caused a lot of things, there are some people who retired, the bar pass rate being what it is, and the private sector is hiring up the law school [graduates], it’s just tough to recruit right now,” Ward said. “So that’s a big challenge for us.”

Ward did say the county has done a very good job of attempting to refresh some of the recruitment issues. He thinks come 2023, “the tide will turn” on the shortage.

Even with the current major backlog and lack of help, it still remains in Ward’s mission to maintain an office in which each and every family feels that their case is the most important case. He asks that families be patient with his office as they are working as hard as they can with what they have.

As far as the backlog goes, Ward said there are many men and women who are carrying the torch trying to get caught up. To the best of their abilities, he said they are prioritizing custody, serious and violent cases. However outside of those, including out of custody and misdemeanor cases will take longer. To put it in perspective, Ward said they have about 18,000 to 20,000 cases come down per year.

Ward said they are anxiously waiting to hear the 2022 crime statistics to see if there will be even more cases to prosecute in addition to the backlogs. Many people were waiting for a “huge wave of extra cases,” but he said he doesn’t foresee it coming to fruition from last years numbers. Infact, Ward said he sees 2023 as the year that “rights itself.”

He is extremely grateful to his family for all the support they have given him throughout the years. Not to mention how thankful he is for the staff that surrounds him each day. This year looked different in terms of the swearing in ceremony, as typically the rest of the staff is also sworn in.

“We all know that as I walked into communities, I get the great honor and the great privilege of working – and I’ll say, surviving – on the good deeds that you do every day day in and day out,” Ward said to his staff during his ceremonial speech.

During his remarks, Ward explained that he has lived his entire adult life living and working under the responsibility of a job that has an oath. When Ward was 23-years-old, he was sworn into the United States Army as an officer. On Wednesday, Dec. 28 he renewed his oath as district attorney, and he considers himself “blessed and lucky” to have been able to do so.

“It is something that not many people walking through life get the honor and responsibility of having a job where they are obligated by an actual oath or an affirmation, but I am. And I continue to be privileged and honored to do it,” Ward said.

After a change in legislation thanks to Assembly Bill 759, district attorney’s and sheriff’s elected in 2022 will now serve a six year term. Ward was originally sworn into office in 2014 and again in 2018 and now in 2022. According to the district attorney’s office, Ward has served in the Office of the District Attorney in several prosecutorial and administrative positions since 1999.

He is a graduate of the University of Tennessee and Western State University College of Law. Ward served as an officer in the United States Army from 1989 to 1992 and was discharged honorably at the rank of captain. In addition to his duties in Tulare County, Ward serves as the President of the California District Attorneys Association, the first such representative from Tulare County to ever serve in the position.