Tornados circle overhead, evacuation warnings are issued for mountain communities and roads are washed out but experts say this is minor compared with major flood events in the county’s history

TULARE COUNTY – As extreme weather passes throughout the state, Tulare County declares a state of emergency to note the seriousness of the matter.

Only two weeks into the new year, the Central Valley already has seen about 30-50% of its annual average rainfall, according to meteorologist Brian Ochs with the National Weather Service (NWS). As of Jan. 13, the NWS has recorded 3.98 inches of rain at their co-op in Visalia, which is well over the monthly average of .91 inches. With that amount of rain, heavy winds, tornado warnings, evacuation notices and damages, the county declared a state of emergency on Tuesday Jan. 10. The day before, Kaweah River reported the most water intake in the past 16 years.

Erik Meyer, an ecologist for the Sequoia and Kings Canyon National Parks, compiled data from the Kaweah River Basin for the past several years. On Monday, Jan. 9, the peak flow into the Kaweah River was 22,973 cubic feet per second. In years without a major water event, peak flows in January are typically below 500 cubic feet per second, according to a chart from the California Department of Water Resources. 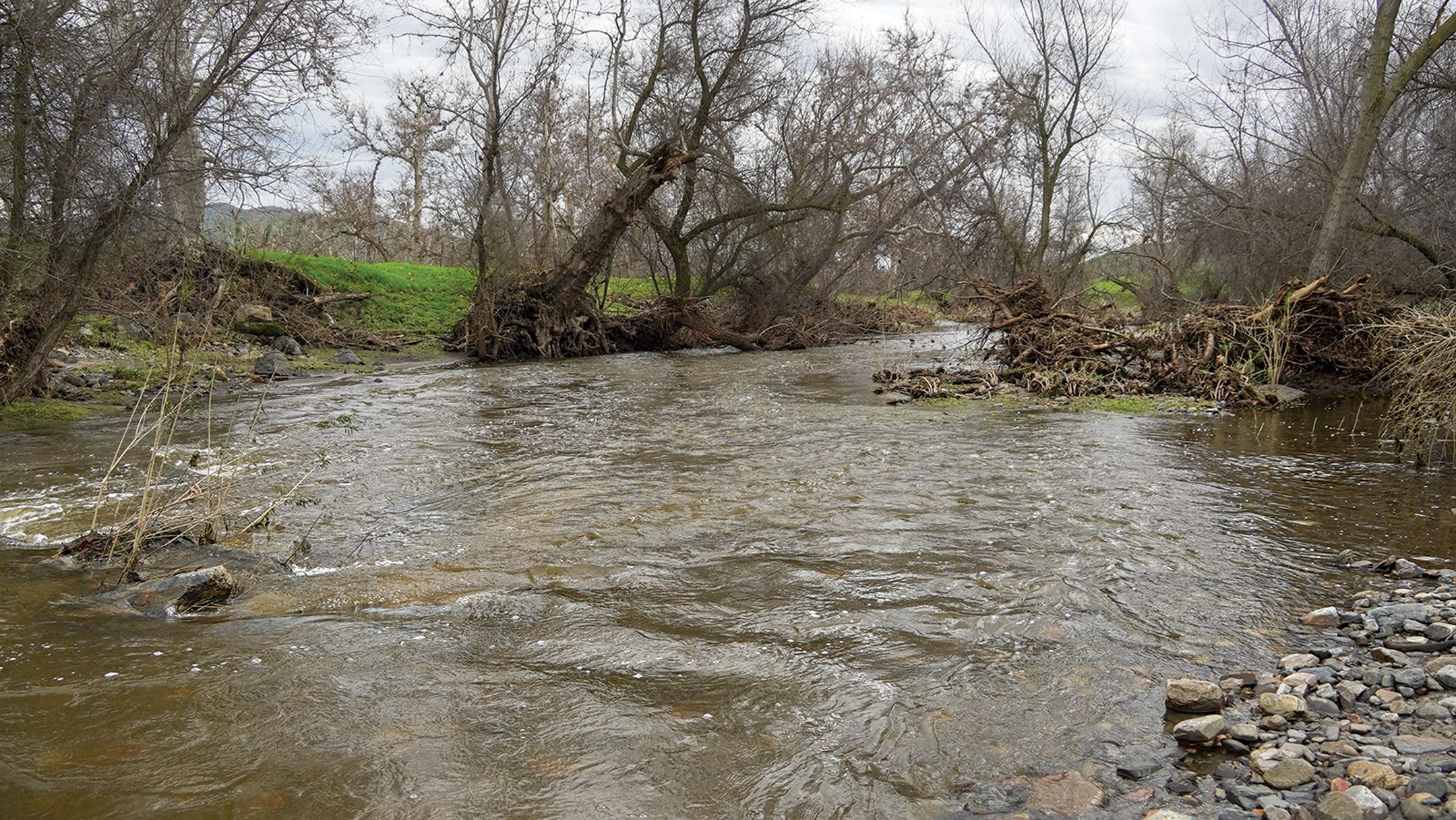 Dry Creek a few days after the storm still has much higher levels of water than before.Photo by Rigo Moran

According to Meyer’s data collection, the last time the Kaweah basin was flush with this much water was in October 2009, when it received 20,937 cubic feet per second. Six years ago, the basin was flowing with 18,550 cubic feet per second in February 2017. However, according to retired National Parks Service (NPS) scientist and author of “Floods and Droughts in the Tulare Lake Basin” John Austin, this weather event won’t have any lasting effects.

“We lost very few bridges and very little roads, it was just an inconvenience,” Austin said. “When the big floods come, there’s no place that is safe.”

Austin spent his career with the NPS and eventually wrote the book on the history of floods and droughts in the Tulare Basin. Throughout his research and time living in Three Rivers, he has learned to put floods in historical perspective. Even though this amount of water is a foreign concept to most people living in the Valley, it isn’t much in comparison to what the Valley has received in the past. However, there was enough rain to do some temporary damage throughout the county, hence the state of emergency.

According to Tulare County’s administrative officer Jason Britt, in order to declare a state of emergency, the county needs to have confirmation that there is an actual or threatened existence of conditions of a disaster or extreme peril to safety of persons or property. An additional determination is if the conditions look as though they might exceed the county’s resources to respond.

“[The state of emergency] communicates to the community that this is serious, and that they need to take the weather seriously too,” Britt said. “It also allows us to plow all of the county resources into the areas that the people on the ground need them to be to help mitigate any kind of property or life damage.”

Nearly four inches of rain hitting the county in less than two weeks did come with some damage. The county opened an evacuation shelter at the International Agri Center after Sheriff Mike Boudreaux issued an evacuation warning for homes and businesses within a quarter mile of the Kings River. Fortunately, the damage was not as bad as originally anticipated there, but several other areas were affected.

“With this storm we had one structure with major damage in the Strathmore area, four structures with minor damage in the Tonyville area, and the majority of structures were impacted, but had no reported damage from the damage assessments conducted [Jan. 11],” Carrie Monteiro, Tulare County Health and Human Services Agency public information officer said. 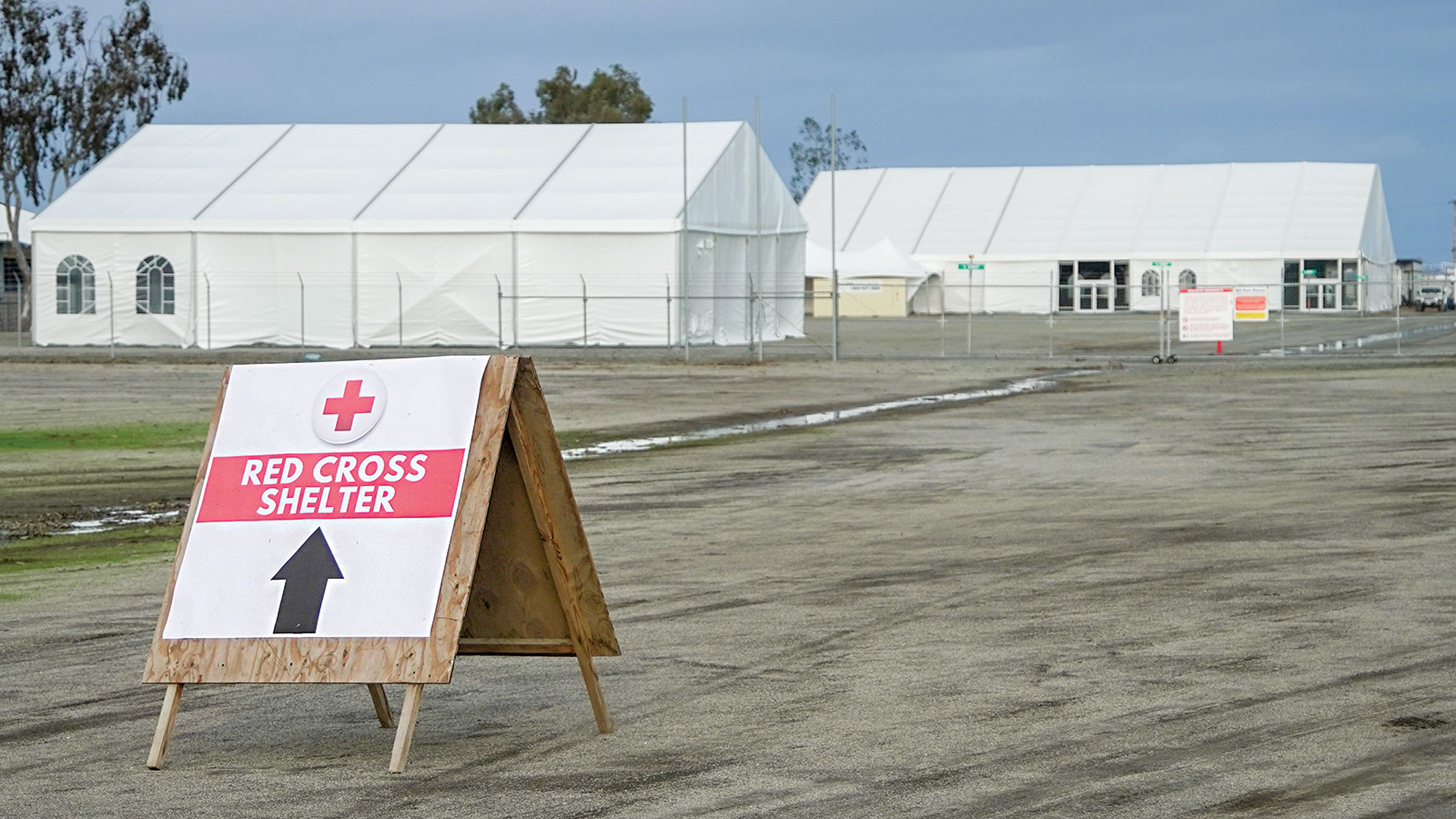 The county set up a Red Cross shelter at the International Agri Center in Tulare for those who had to evacuate their homes.Photo by Rigo Moran

There were numerous rock slides and washouts along Highway 190, according to the Tulare County Sheriff’s Office. As a result, the road has been narrowed to a one lane road and an evacuation warning for the communities of Sequoia Crest, Alpine Village, Redwood Drive, Cedar Slope and Ponderosa had been issued on Jan. 13. For those who wish to stay in their homes, the county was able to open the Great Western Divide also known as Mountain Road 107, but not for long.

In Three Rivers, approaches to the Conley Bridge on South Fork Drive and what is known as the “airport bridge” on North Fork Drive were washed away causing some individuals to be stranded on the other side. According to Ross Miller, chief engineer with the Tulare County Resource Management Agency (RMA), typically the reason bridge approaches are affected is because the bridge is blocked by too much debris. The blockage then pushes water around the bridge instead of under it.

In preparation for a storm, RMA goes out and does their best to prepare the county. Miller said they check bridges for preexisting debris to prevent anything from getting caught. The process doesn’t help much when there is an overwhelming amount of water. When an approach to a bridge is washed out, the county will respond, as soon as they can, by filling the empty area to allow for vehicle traffic.

Additional affected areas included Globe Drive in Springville; the approach to the bridge going over the Tule River is damaged as well. In the California Hot Springs area, there is a bridge called Manter Meadows that also suffered from a washout and was plugged over, according to Miller. One of the more damaged roads was Avenue 368 in Visalia which was washed out by an overflowing Cottonwood Creek.

Miller said his crews have been working hard to keep roads open.

“I think our procedures have been really good,” Miller said. “We’ve been out there doing lots of preparation and following our Public Works standards and practices.”