Sheriff Mike Boudreaux announces a $10,000 reward with “more money coming in,” and asks for the public’s help to further the investigation

VISALIA – In partnership with the Bureau of Alcohol, Tobacco, Firearms and Explosives, the Tulare County Sheriff’s Department is now offering a reward to help move the investigation of the Goshen home massacre forward.

After the execution of a family in Goshen on Monday Jan. 16 left six people dead, Sheriff Mike Boudreaux has announced a $10,000 reward. Included in the multiple homicides was a 16-year-old and her 10-month-old baby who were both shot in the head. The sheriff’s department will grant a reward for information that leads to the capture of the individuals involved. Currently the Tulare County Sheriff’s office (TCSO) is working diligently and with nearby counties as well as individuals at the federal level. It is believed the crimes are of a similar caliber to those committed by cartels or those with high-ranking gang affiliations.

“What these cowards did is disgusting and I want to see them face their judgment,” Boudreaux said. “This was a cartel-like execution. We are not eliminating the idea that the cartel was involved. But we are looking at all avenues. We are looking at every fact. We will not give up until we find these monsters.”

During a press conference held on Jan. 17, TCSO invited the public’s help. Whether it be to notify them of recognized suspicious activity or to look back at any home surveillance footage. They are looking in particular for information during the hours of 2 a.m. and 5 a.m. to find any suspicious activity.

“It is important that anyone with video surveillance, or video cameras, ring cameras, anything within the community,” Bourdreaux said. “It’s going to help us tie together a timeline as well as the manner in which we believe it happened.” 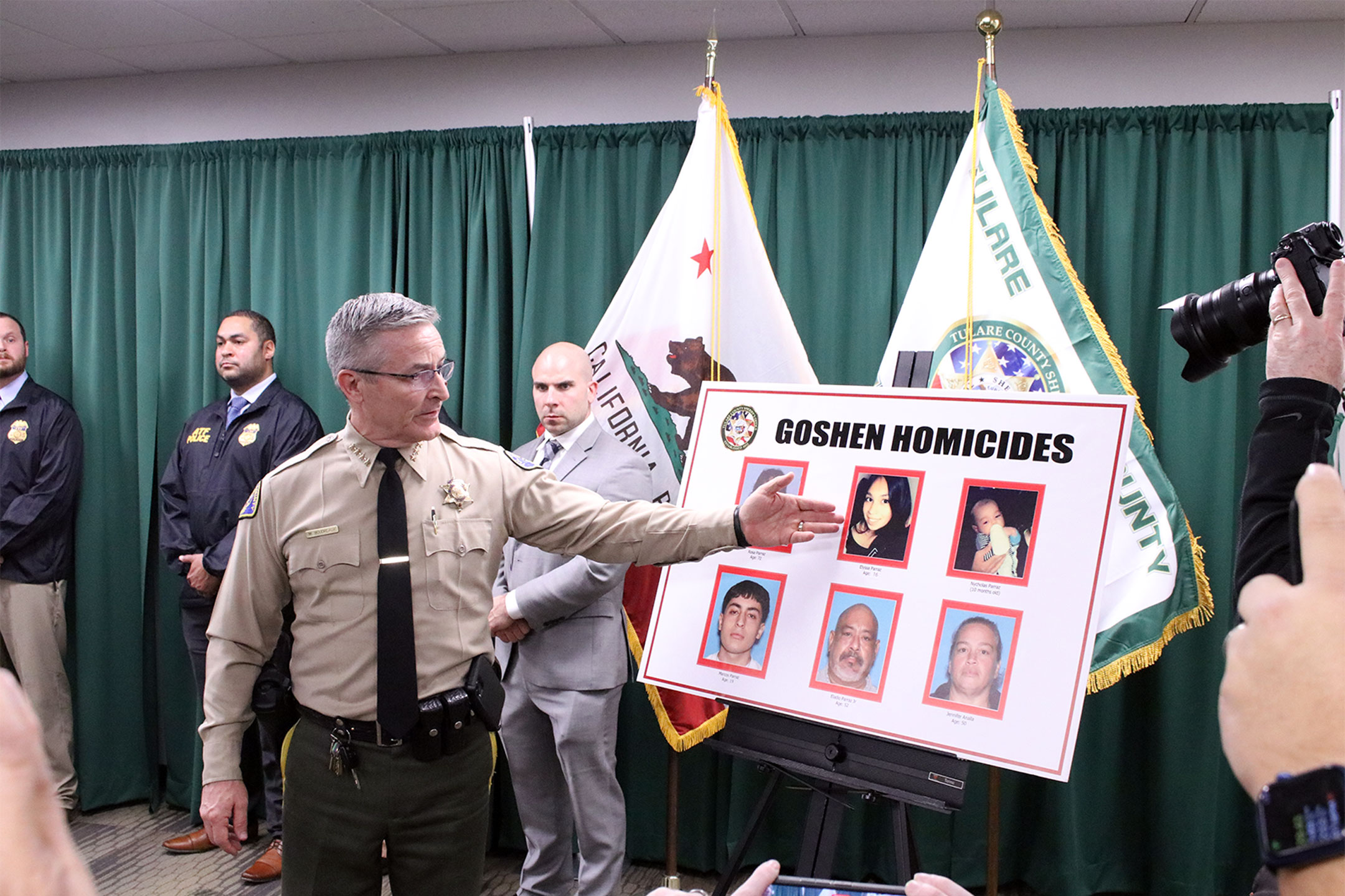 Sheriff Mike Boudreaux explains who the victims were in the Jan. 16 Goshen massacre. He updated the media at a press conference on Jan. 17. Photo by Maddi Langton

At 3:30 a.m. on Monday, sheriff’s deputies were dispatched to a home in Goshen for a call of shots fired. Originally, the individuals who reported the shots believed there was an active shooter due to the amount of shots heard according to Boudreaux. Deputies arrived seven minutes later where they immediately discovered two victims dead in the street. It was later determined the individual who called 911 was a survivor in the home at the time of the shooting.

“This was methodical, well planned out tactical, executed quickly,” Boudraux said. “So from the time of the phone call until we arrived was a very short amount of time. And by then they were long gone.”

It was determined that there were six total victims. Deputies first believed one of the victims to be a 16-year-old girl with her six-month old baby, however upon further investigations it was determined she was in fact 17-years-old and her baby was a 10-month-old baby boy. The two were found down the street from the residence, both shot in the head.

The 17-year-old’s grandmother, Rosa Parraz, 72, was shot while she was sleeping inside the house. The two others found dead at the scene were Eladio Parraz, 52, and Jennifer Analla, 49. Marcos Parraz, 19, was taken to a local hospital where he died from his injuries.

Detectives believe there are at least two suspects and a possible third, and they are currently not able to give a description of any suspects. Boudreaux said he is confident they will find them, only the timeline is unknown.

It is also believed, and Boudreaux said he knows it to be true, that the attack was not a random act of violence. There are gang associations involved, as well as drug investigations, however, not all the victims were known gang members or drug dealers.

Prior to the Jan. 16 attack, TCSO deputies conducted a parole compliance check at the home on Jan. 3 because this is a known home to the department. Boudreaux said it is a house where “gang activity has routinely occurred in the past.” That day, shell casings were found outside the home at that time and Deputies asked to go inside the home but the people at the house became uncooperative and refused.

The sheriff’s department then obtained a search warrant where they were able to search the home. Deputies then found marijuana, methamphetamine, guns and body armor. Eladio Parraz, who was already a convicted felon, was arrested for being a felon in possession of ammunition, firearm, short barrel rifle, assault weapon, loaded weapon and firearm while in possession of a controlled substance. However, Boudreaux said he bailed out four days later.

“This home was known to us,” Boudreaux stated. “That’s how I’m able to say that this is a gang related activity.”

Boudreaux added this is also similar to “high ranking gang affiliations” style of execution as well.

“Make no mistake, I’m not saying that this is a cartel but also be clear that I am not eliminating that possibility,” Boudreaux continued at the press conference. “These people were clearly shot in the head, and they were also shot in places that the shooter would know that quick death would occur.” 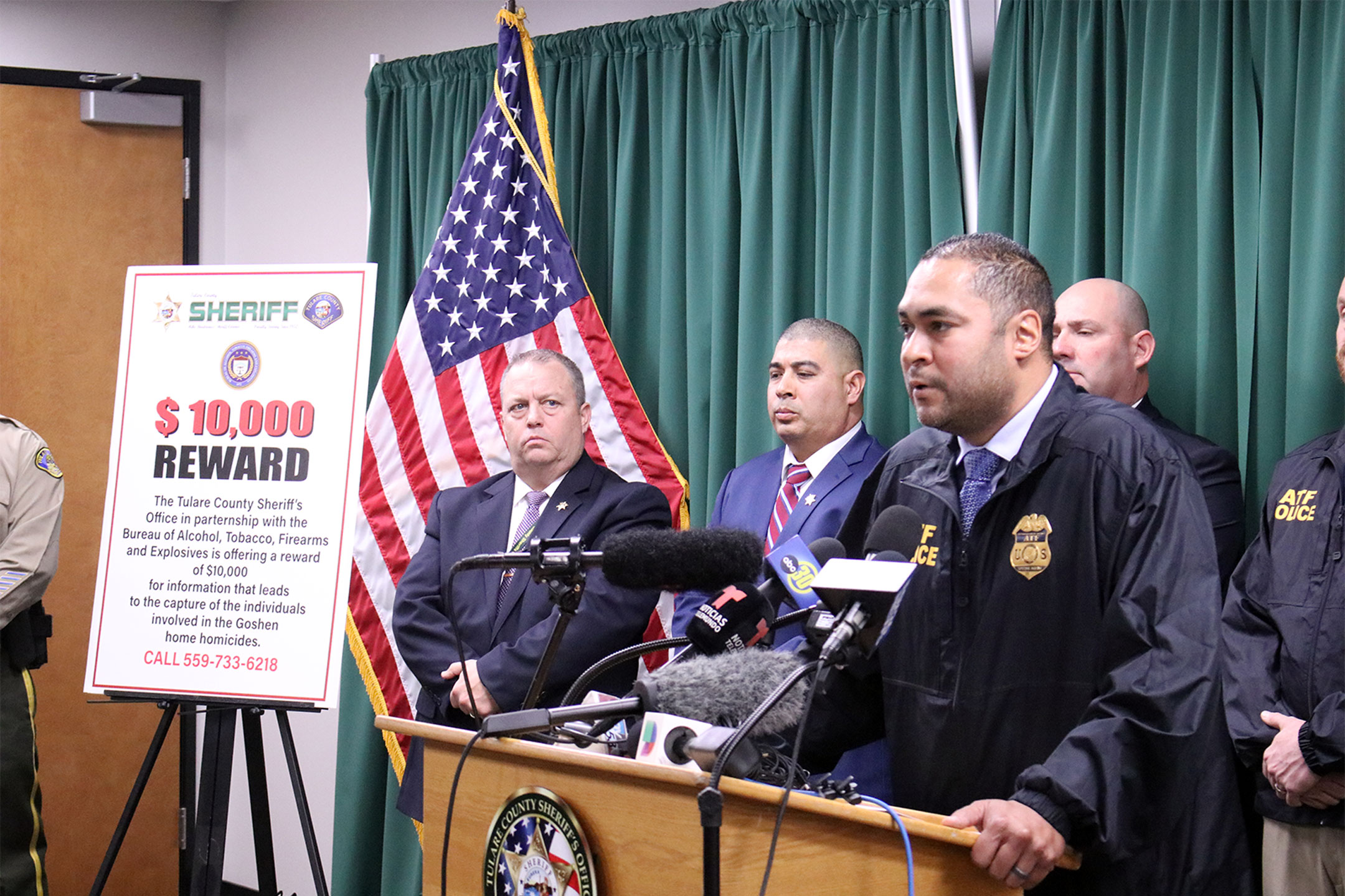 Joshua Jackson is the acting special agent in charge for the San Francisco Field Division ATF. Jackson announced the partnership between ATF and TCSO offering the $10,000 reward. Photo by Maddi Langton

According to Boudreaux, there are cartels in the Central Valley, and even in Tulare County. There are many reasons they would be in areas like the Valley, one being the money is lucrative and the other according to the Sheriff is that “we have a very un-secure border right now.”

“There’s a lot of back and forth when it comes to the cartels and free movement up and down the state and across the border,” Boudreaux said. “We have intelligence on cartels as well as gangs and drug trafficking organizations in the light, and most of those criss-cross each other many times.”

Boudreaux said detectives have been working 24 hours a day. The sheriff’s office is working with the Bureau of Alcohol, Tobacco, Firearms and Explosives (ATF), the FBI, Homeland Security, Drug Enforcement Administration (DEA), Department of Justice and the California Department of Corrections.