Tulare Police officer was shot in the leg when a wanted suspect tried to pull his gun from its holster; officer is recovering at home and will return to duty soon

TULARE – A Tulare officer was shot last week during a struggle with a man during a traffic stop. 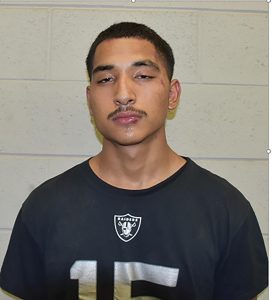 Just after 9 p.m. on July 17, the Tulare Police Officer conducted a traffic stop on a vehicle for not having a rear license plate in the parking lot of Panda Express, located in the 1100 block of East Prosperity Avenue in Tulare.

The vehicle was occupied by two males so another officer arrived to assist with the stop and made contact with the passenger while the first officer spoke to the driver. The male passenger appeared to be nervous and attempted to provide a false name. Officers were able to confirm his identity as Fernando Trinidad Ruelas, who was found to have a felony warrant for second degree robbery. When officers asked Ruelas to step out of the vehicle, the suspect tried to run but was quickly tackled. The suspect continued to be combative and during the struggle one of the officer’s firearm was discharged while still in the holster. The suspect was eventually tased and placed in handcuffs.

After the suspect was secured the officer realized that he had received a graze wound to his leg. Medical personnel was summoned and the officer was transported to a nearby hospital for a non-life threatening injury. The officer was treated and released the same night and is recovering at home. Because he was determined to be a victim of this crime, he was not placed on administrative leave and will soon return to duty.

Based on evidence found at the scene as well as witness statements, investigating detectives believed that the suspect attempted to pull the officers firearm from the holster and in doing so the firearm discharged. This incident is still being investigated at this time.

The driver of the vehicle was released without charges after obtaining his statement. His name will not be released at this time.

Ruelas was transported to an area hospital to be medically cleared and then booked into the Tulare County Jail and charged with assaulting a police officer and resisting an officer with threats or violence. He is also being held on several outstanding warrants.