VISALIA – An Exeter man was found guilty last week of assaulting an officer with his car. 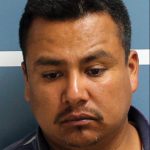 According to the Tulare County District Attorney’s Office, on Wednesday, Aug. 4, a jury found Jose Flores, 41, guilty of one count of assault with a deadly weapon for a 2017 road rage incident directed at an off duty police officer.

“We all recognize the dangers police officers face while on duty. Unfortunately, even just wearing the uniform made this victim a target. The men and women who wear the uniform deserve respect both on and off duty,” District Attorney Tim Ward said. “Road rage on our streets is a serious matter and can happen to anyone. These kinds of acts have no place in our community.”

On Oct. 9, 2017, while driving an unmarked vehicle eastbound on Highway 198, the officer signaled his intent to turn right onto a rural road and slowed down. A Toyota sedan, driven by Flores, rapidly approached behind the vehicle. During the turn, Flores accelerated past the officer’s vehicle on the right shoulder, eventually cutting hard left causing the officer to take evasive action to avoid a collision. Flores continued at a high rate of speed and applied the brakes forcefully, blocking the road.

The officer, fully dressed in an authorized uniform, stopped and exited his vehicle announcing that he was a police officer. Flores looked at him through his open window, put the car in reverse and drove directly at the officer, and missed him by inches. The officer yelled “Police officer, stop!” several times. Flores then drove forward into the driveway of a nearby residence. Emerging from the vehicle, Flores profanely disparaged law enforcement and at times took a fighting stance.

After the officer drew his firearm from his holster, Flores entered the residence. Tulare County Sheriff’s deputies soon arrived and took him into custody.

Sentencing is scheduled for September 1, 2021, in Superior Court where Flores faces a possible prison term and probation. The case was prosecuted by Deputy District Attorney Kimberley Church and was investigated by the Tulare County Sheriff’s Office.