Visalia Police Department applies for $50,000 from the state as a reward to find those responsible for gunning down three teenagers in the Golden West parking lot in May 2020

VISALIA – It’s been over a year since three teens were gunned down in the Golden West High School parking lot and no arrests have been made. There’s even a reward, but the Visalia Police Department says it may not be enough to find the shooter.

On Friday, VPD announced it was applying for $50,000 in assistance from the State of California to offer as a reward for information leading to the arrest and conviction of those responsible for the killings. Valley Crime Stoppers is already offering a $9,000 reward.

According to police reports, officers responded to a report of shots fired at about 11:15 p.m. on May 5. When officers arrived on scene, Jose Hernandez-Pena, 19, Isaiah Rule, 18 and Blake Medeiros, 19, were already deceased. 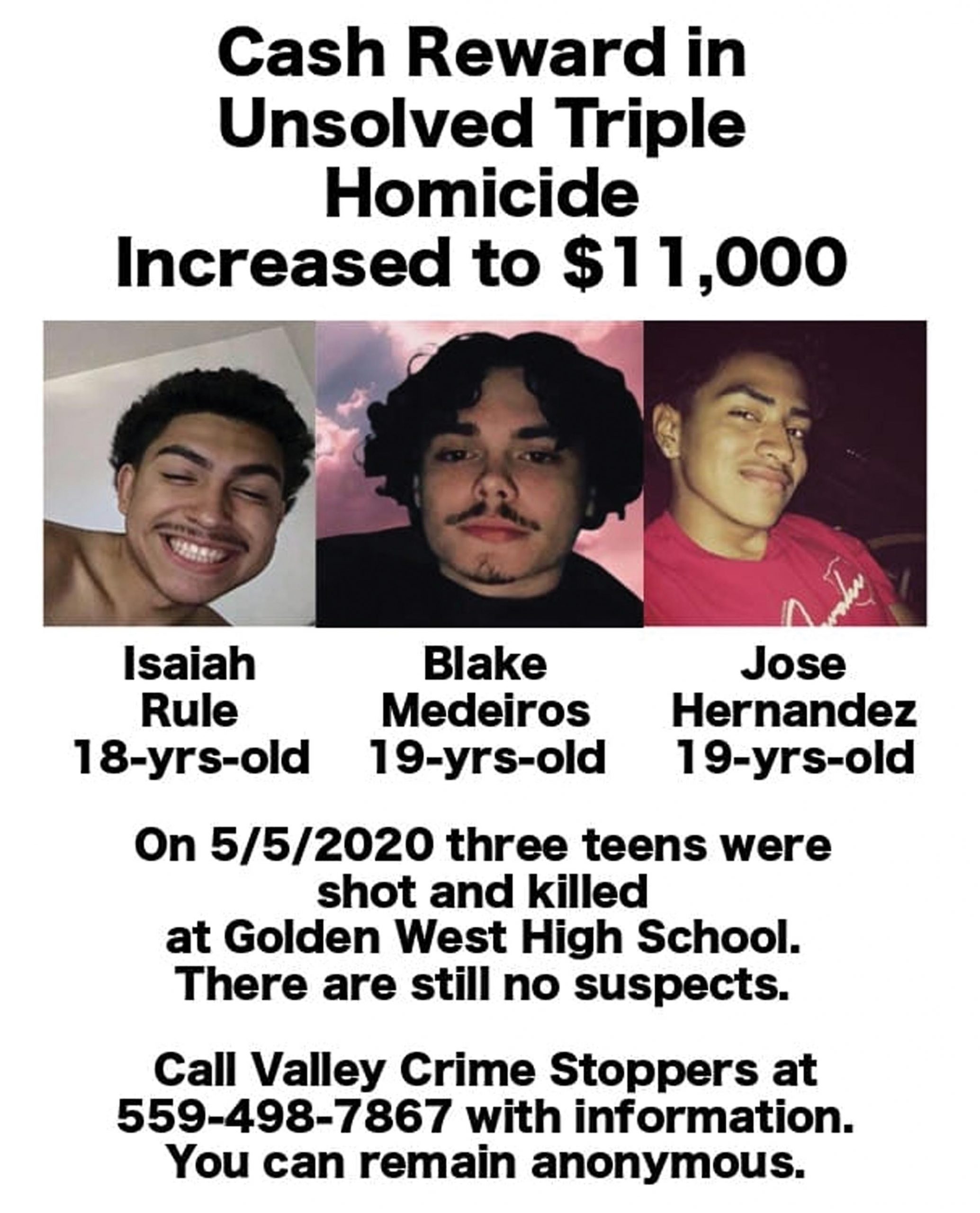 Isaiah’s mother, Nikkole Rule, arrived later that night to find police investigating the crime scene. Last Friday, Oct. 1, she held a raffle for a fall-themed gift basket to help raise funds for Crime Stoppers to offer more reward money. She said she promises her son, who she calls “Zah,” every day that she will find those who took his life.

“And even though there are days I just want to end it all, I can’t let those [them] be free!,” she wrote on Facebook. “I push through for him! And I will raise more $ towards that reward! I won’t stop fighting! I can’t! I love you baby so much!”

Anyone with information is asked to please contact Detective Rob Meier at 559-713-4211. Those wishing to remain anonymous can contact the Visalia Police Department Tip Line at 559-713-4738. To report information to Crimestoppers call 498-STOP (7867) or visit their web site at www.valleycrimestoppers.org.

The night after the murder, Nikkole led a vigil in the boys’ honor in the parking lot where they were killed. More than 130 people came by the vigil to leave votive candles, flowers, photos and mementos of the three young men on one of the pillars to the parking shade near where the boys were shot and killed. Some used a marker to write messages along the concrete base of the pillar.

Isaiah’s mother, Nikkole Rule, said her son had a big personality that could fill a room. He was goofy, fun-loving, loud and enjoyed every moment of every day. Blake’s cousin, Kevin Knowles, grew up playing football with Isaiah and Blake. He said his cousin always wanted to be around music. He played the part of rapper with tight pants, Gucci belts and fancy shoes. He said Blake was an outstanding athlete who could play almost any position on the football field. He said family was important to Blake who had his grandmother’s name tattooed across his neck and his mother’s name on his arm.

Isaiah’s grandmother, Susie Garza, said Isaiah was on track to get his GED next month. She said he loved burgers and was drawn to the beach. He didn’t necessarily like to swim in the ocean or walk in the sand, but he felt inspired there. He loved music and creating his own and enjoyed being with friends and family.

On Aug. 24, 2020, Nikkole wrote a Facebook post to “my son’s killer” telling them they were responsible for turning her life, and many other friends and family member’s, upside down. She wrote about how she will never see her son get married, have children of his own, and pursue his dreams.

“I can not wait for the day my son gets JUSTICE,” Nikkole wrote. “I hope you suffer as well as your family because you tore mine apart. You alone shattered my world.”