At 8:56 a.m. the Visalia Police Department responded to a robbery which had just occurred at the Double D Mini Mart located at 1500 W. Houston Ave in the City of Visalia. The investigation revealed that a male subject was confronted during a theft and displayed a firearm on his person. The suspect then fled the business.

During the subsequent investigation officers were able to identify Hector Geovanni Esquivel, 40, of Visalia as the person responsible for the robbery. At approximately 11:00 a.m. the suspect was located in the area of Houston Ave and Park Street where he was taken into custody without incident. The suspect was transported to the Tulare County Adult Pretrial Facility booked for robbery as well as several outstanding warrants. 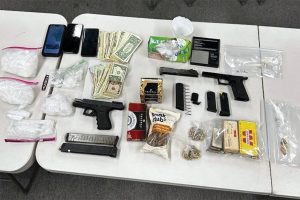 The search warrant resulted in one handgun that had been modified to be a machine gun and reported stolen out of Tulare, one privately manufactured firearm handgun frame, three large capacity magazines, one standard capacity magazine, numerous firearm parts, approximately four hundred rounds of ammunition, approximately two pounds of suspected methamphetamine, scales and packaging material as well as U.S. currency supporting the sales of illegal narcotics.

At 5:32 a.m. the Visalia Police Department received a call for service in the 900 block of West Sweet regarding a male who had unlawfully entered a residence. As officers arrived in the area, the caller advised that the male fled on foot. During the incident on West Sweet the male entered the home and demanded money from the resident. An altercation ensued and the residents were able to get the male out of the home.

Dispatch then received a call from a resident in the 1400 block of North Conyer advising that a male was attempting to enter their home. Officers quickly responded and took the male into custody prior to him entering the residence on North Conyer.

Through the investigation Alex Aguilar, 55, was positively identified as being responsible for both incidents. The suspect was arrested for home invasion and attempted residential burglary and was booked into the Tulare County Pretrial Facility.

Both Solis and the involved officer had complaints of pain and were transported to Kaweah Health Medical Clinic. They were treated for minor injuries and released. Further investigation revealed Solis was under the influence of an alcoholic beverage at the time of the collision. Solis was arrested and later booked into the Tulare County Pretrial Facility for driving under the influence of an alcoholic beverage and causing an injury traffic collision.