He was born on May 20, 1929 to John “Elmer” and Lila Miller on a citrus and olive ranch in Lindsay, Calif., where he, his three brothers, and sister grew up and attended school. He was the 1946/47 Lindsay High School Student Body President and captain of the lightweight football team before going on to College of the Sequoias. After graduating from COS in 1949, Willard began his business career with Security First National Bank in Visalia.

He met and married Marjorie Jean Sisson of Tulare, Calif. and they had two children, Stephen and Constance “Connie” Miller. 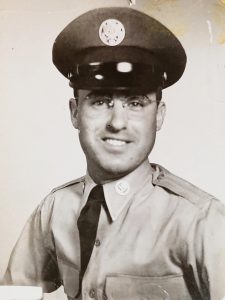 In 1951, Willard joined the U.S. Air Force and served four years, the majority of which was spent inside the Albuquerque, NM hillside known as Manzano Base. As a nuclear weapons technician and, ultimately, staff sergeant, he had much to be proud of and told many stories about his service throughout his lifetime.

He returned to Visalia in 1955 to continue working for what later became Security Pacific Bank until 1979.

While at the bank, one of his five transfers was to become bank manager of the Exeter branch, a town where he thoroughly enjoyed his time and became very active in the Exeter Kiwanis Club, Exeter Community Chest, Exeter and Tulare County chambers of commerce, and Exeter Red Carpet Festival. It was also during this time that he met and married, Shirley Carter, and adopted her two children Phil and Kimberly.

After leaving Security Pacific, Willard took on the responsibilities of president and chief executive officer of Central State Credit Union, located in Stockton, Calif., and, once again, started serving the community through several service organizations. Willard retired in 1997. He and Shirley returned to Exeter in 2007.

Willard was preceded in death by his wife Shirley; parents Elmer and Lila; brothers Gordon, Keith and twins Warren, and sister Naomi Allen. He is survived by his children Stephen (Mary), Connie, Phillip (Leanne) and Kimberly and numerous nephews, nieces, grandchildren and great grandchildren.

One of his greatest joys in life was listening to and singing old hymns and country gospel, proud of his position of bass in his church choir. Another joy was driving the many convertible sports cars he owned throughout his life and, later, riding motorcycles.

Dad was a sharp, caring and compassionate man who knew, loved and served his Lord well, skills taught to him by his loving and nurturing parents and mirrored in his siblings, who have all left great legacies in strong, loving families.

His boisterous “Miller laugh,” that he wasn’t afraid to use, will be missed greatly.