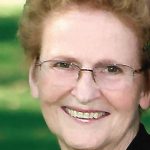 Longtime Exeter, Calif. resident Frances Hovis quietly passed away with her family by her side Monday, July 6, 2020. She was 89 years old. She was born in Gallup, New Mexico on June 4, 1931 to Leonard and Mary Hampton. Frances attended school in both Exeter and Monrovia, Ala., graduating from Monrovia High School in 1950. On July 14, 1950 she married the love of her life Burton Hovis. They were married 64 years until his passing in 2014. In 1956 she gave birth to her son Marshall and their family established a home in Huntsville, Ala.

In 1956 the family made their move to California, establishing a home in Exeter. Frances worked for Bank of America for 30 years, retiring briefly to help take care of her four grandchildren. She finished her employment career at Rancho Pharmacy in Exeter. She was a great sports fan for Exeter Youth Sports, serving as the first Treasurer for Exeter Pop Warner Football. A true fan of Exeter Union High School, she followed the sports and musical careers of her son and grandchildren and many of her other so called children. She was a staple for years in the stands at Lion Stadium during baseball season.

She was preceded in death by her husband Burton; parents Leonard and Mary Hampton; and sister Lorene Hampton. She is survived by her son Marshall; daughter in law Renee; and grandchildren Jenna, Beth, A.J. and Daniel; and numerous nephews and nieces. She loved her community and was considered by many to be a second mom and grandma to many.

A private family service will be held at a later date as well as a public Celebration of life. Condolences may be sent to the family at www.evansmillerguinnchapel.com. Services entrusted to Evans Miller Guinn Chapel in Exeter.