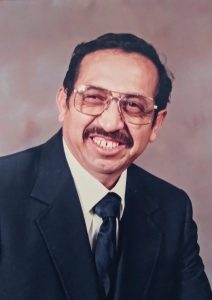 Gilbert Sanchez passed away peacefully on July 15, 2020 at Bel Vista Healthcare Center, a nursing home in Long Beach, Calif., where he has resided since May 2015. He was 85 years old. Known as “Pipa” to his grandchildren, Gilbert was known for his sense of humor, love for his family and playing golf.

Gil was a third generation Californian born on Jan. 1, 1934, to Theodore and Nellie Sanchez. He spent his early years in Farmersville, Calif. as a field laborer with his parents and siblings Anita, Carol and Alfonse. Gilbert attended Visalia High School where he was a champion track and cross-country runner.

Gilbert was an Army veteran who proudly served in the Korean War, was wounded during battle and honorably discharged on Nov. 4, 1955. The discipline and patriotism he learned in the military never left him, as his friends and family will attest.

After his military services he moved to Los Angeles where he was employed as a photographer for the Los Angeles Times-Mirror Organization and then as a graphic designer for Graphic Process Corporation. In Los Angeles he met and married his wife, Carmen Gonzalez Franco. They were married for 50 years and raised one child.

Gilbert and his family later moved to Farmersville, Calif. to be closer to his family. He was employed by the Farmersville School District for many years as a bus driver and maintenance person.

He will be interred at the Visalia Cemetery. In lieu of flowers, the family asks that donations be made to the Coalition of Humane Immigration Rights (CHIRLA) online at www.chirla.org or by calling 213-201-8722.