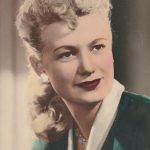 Marian Lenora Phillips, a native of Exeter, Calif., passed away on July 6, 2020 in Leander, Texas. She was 88 years old. Marian was the youngest of five siblings born on Sept. 28, 1931 in Haskell, Okla. She later grew up in Exeter where she graduated from Exeter Union High School. Marian was a devoted military wife, married to Ralph Leo Phillips, and mother to their son Rick Ellis Phillips.

She was preceeded in death by her parents, Marion Arthur Neal and Fayna Alice Neal (Barrett); brothers William Ora Neal (half brother), Everette Howard Neal, Robert Eugene Neal; and sister Gloria Marie Neal. In addition to her husband Ralph Leo Phillips and son Rick Ellis Phillips, she is survived by daughter in-law Lynda Phillips and granddaughters Julianna and Ava Grace. She loved her extended family which included many cousins, nieces, nephews and their children and friends.

Due to COVID-19, the family will not be having a memorial service at this time. Marian’s desire was to be cremated. The family will safely celebrate her life at a later date.