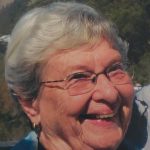 Dorothy Leask Coles was born in Modesto, Calif. in 1930 to Haswell Leask and Hazel Netherton Leask and grew up in nearby Waterford. With her older sisters Peggy, Bobbie, and Mary, she reveled in the fun of being a ranch girl. From an early age, she learned and lived the agricultural virtues of independence, competence and creativity.

After graduating from Oakdale High School in 1949, a proud “49er,” Dorothy enrolled in San Jose State College. She majored in occupational therapy, minored in art, and became a member of Gamma Phi Beta sorority. While there, she met Morey Coles, Jr, and they married in 1952. In June 1953, Dorothy graduated with her Bachelor of Science degree and had their first son, Chris.

After Morey’s graduation, the couple moved to Angel’s Camp for Morey’s first teaching and coaching job. Daughter Barbara and son David were born in the gold country, but in 1958, when David was two weeks old, the family moved to Lindsay, Calif., which became Morey and Dorothy’s lifelong home. Daughter Sara was born there in 1966. 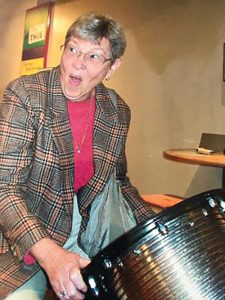 Dorothy was active in the PTA, the American Association of University Women, and later, the Sister City Committee, PEO, and the Orange Blossom Festival committee, always willing to take on leadership roles. She volunteered at Lindsay Hospital, using her training in occupational therapy to help patients regain mobility, and enjoyed her many years as a volunteer at the Coordinating Council thrift store. In 2006, Dorothy was named the grand marshal of the Orange Blossom Festival, and in 2007, she was awarded Lindsay’s Volunteer of the Year by the Chamber of Commerce.

Dorothy and Morey were dedicated, life-long members of St. James Episcopal, later Anglican, Church. Dorothy served many years teaching Sunday School, on the Altar Guild, as a member of the Episcopal Church Woman, and as church treasurer.

Dorothy was involved in 4H with Barbara, helping her with horsemanship and teaching 4H sewing. Later, she and Sara were members of the Indian Maidens, with another year as sewing leader with 4H. She and Morey always supported their children’s sporting activities, and the family spent many wild, dusty, happy times together at the family cabin in Yosemite.

Dorothy continued her art with craft and sewing projects in the ’60s and ’70s, and later took up watercolor painting, taking classes in Yosemite Valley with her grandchildren. Interested in her family’s rich history, she investigated its genealogy and compiled family writings from the 1700s to the present.

Dorothy combined fun and calm practicality in a seamless way, a master of the “life hack” before it had a name. Always welcoming and generous, she prized all of her friends and her far-flung family.

Graveside services were conducted with the immediate family, and a celebration of Dorothy’s well-lived life will be planned for a post-COVID-19 time.