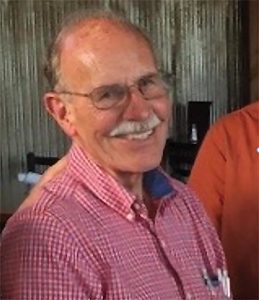 Born at the first Exeter Hospital to Ruth and Sidney Charles Schelling on March 11, 1938, he was the second son for the young family. Bob was educated in the local public schools, graduated Exeter High School in 1957 and then attended COS. A local swimming champion and weightlifting instructor, he joined his father Sid Schelling Sr. in January 1962 at the Exeter Mercantile Co., an International Harvester dealership, and so began his 58-year career as a farm equipment dealer and hardware store manager.

Upon his father’s death in 1964, Bob’s brother Sid Jr. returned to Exeter and the two became partners, expanding the hardware and gifts department as an independent ACE store. Bob traveled the state designing specialized citrus harvesting and handling equipment and expanding the farm implement side of the business. Bob’s youngest son Brian joined his dad in 1990 expanding the farm equipment brand and the three have continued the legacy of this 103-year-old, family owned Exeter flagship store.

In addition to his store management and sales responsibilities, Bob began farming in the 1960’s working at the store till 6 p.m. and then home to work the farm ‘til late in the night, before finally having dinner. He was a citrus and walnut grower for more than 40 years and often expressed that though it was hard work besought by hardship and challenges, he loved it. He often would say, “I just love it.”

Bob married his loving and devoted wife Sharyn Goldsmith in April 1992, and they recently retired in Pismo Beach. Bob said, “I’ve fallen in love again,” and the two were enjoying retired life in their new home.

Bob is proceeded in death by his parents, Ruth Evangeline and Sidney Charles Schelling, and his loving cousin Kenneth. He is survived by his loving brother and partner Sidney C. Jr. and his younger sister Elizabeth “Betty” Schelling O’Keefe and Niece Dr. Christianne Schelling. Bob is also survived by his four exceptional children and his six beloved grandchildren; daughters, Natalia, her husband John Berglund, their sons Wyatt and Chet; Michele, her husband John Schulz and their son Samuel; sons, Eric Schelling, his wife Holly, their son Joshua and daughter Sarah; son Brian Schelling, his wife Debbi and their son Ethan. Bob often audibly thanked God for his children.

“I have fought the good fight, I have finished the race, I have kept the faith. Henceforth there is laid up for me the crown of righteousness, which the Lord, the righteous Judge, will award to me on that Day, and not only to me but also to all who have loved His appearing.” 2 Timothy 4:7-8

A graveside service will be held at 2 p.m. on Monday, Sept. 21 at the Exeter District Cemetery followed by a reception from 3 to 5 p.m. at the Exeter Woman’s Club. Arrangements by Smith Family Chapel in Exeter.