David Stutsman of Exeter, Calif. passed away on Tuesday, Sept. 29, 2020 in Visalia, Calif. He was 82 years old. Born on Oct. 17, 1937 in Tustin, Calif. to Walter Abraham and Margaret Carolyn Stutsman, he was the youngest twin and second oldest of five children. He graduated from Tustin High School where he also met the love of his life, Gloria, at a school dance. He married her shortly after and would remain married for the next 61 years. He worked the majority of his life as an orange farmer. He first leased property in Orange County and then later relocated in 1962 to Exeter where he purchased land with his twin brother Don. David would later go on to have orchards in Woodlake, Lindsay, and Strathmore. 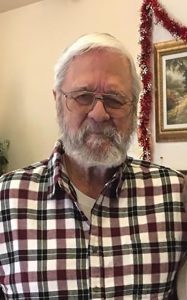 David, better known as Papa, loved giving his grandchildren rides on his ATVs as he checked on his crops. He loved going to all his grandchildren and great grandchildren’s sporting events and enjoyed watching his daily soap operas where he would fall asleep halfway through them in his rocking chair. Saturdays at Papa and Grammy’s house will always be cherished greatly as the entire family would get together for birthdays, anniversaries, or for the holidays. During summer, while the grandchildren swam in their pool, Papa would make homemade ice cream for everyone while he listened to the San Francisco Giants game on the radio.

He will be remembered for his large personality, his unfailing work ethic, his dedication to his family, his generous smile, and his scruffy beard.

David’s legacy is his family. They loved him and will miss him greatly. With heavy hearts we can find peace knowing that he is with God and his Gloria in Heaven.

The family wishes to thank Magnolia Park and Hospice for their thoughtful service and a personal thank you to Esperanza Hansen for her tender care. Funeral services will be held at 10 a.m. on Friday, Oct. 9, 2020 at Exeter Cemetery. Friends and family are welcome to attend. Condolences may be sent to the family at www.evansmillerguinnchapel.com. Services entrusted to Evans Miller Guinn Chapel.