William “Bill” Clarence Nielsen of Exeter, Calif. passed away peacefully at home in the early morning of Oct. 1, 2020, in the company of his beloved son David, after complications from a staph infection and organ failure. He was 82 years old. 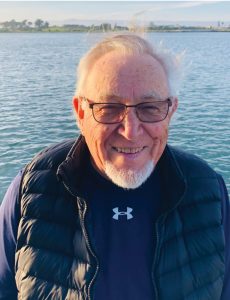 He was born on October 26, 1937 in Visalia, Calif. and was the first son of Clarence and Nourhalma “Nourie” (Springer) Nielsen. He attended Exeter schools, was a member of the Cub and Boy Scouts of America, and while attending Exeter High School, participated in band, basketball, and football. He often spoke of the honor he had playing football alongside local legend Kenny Guinn. Bill graduated Exeter High School in 1955, earning Life CSF and the Bank of America Math Award. He received his Bachelor of Science in Business Administration from Fresno State College in 1959. Bill was a member and treasurer of the Kappa Sigma Fraternity. He also served in the National Guard for two years, stationed at Fort Ord in Monterey, Calif.

He married Charlene Gay Brooks of Dinuba in 1960 and then worked for the Insurance Company of North America (INA) in San Jose, Calif. Bill and Charlene settled in Exeter in 1964 to begin their family, and Bill joined his father Clarence at the Nielsen & Eddy Insurance Agency. In 1974 when his father retired from the insurance industry, Bill put together the merger between Nielsen & Eddy and Sellars & Sons agencies, to form NSE Insurance Agencies. After leaving NSE in 1983, Bill launched Nielsen & Associates Insurance Services in 1984. He was always very proud to have his family involved in the operation of the agency and felt especially blessed to have David join him in 2005. Bill’s professional accomplishments included: earning his CPCU degree—the highest professional designation in the industry, being appointed regional representative of the Commercial Union Producers Group in Boston, MA, state Big “I” and education committee chairman, president of the Tulare/Kings County Independent Insurance Agents Association, and AIMS Computer Group president. He was also a real estate broker. Bill was instrumental in the development of insurance contracts for the crop insurance industry. After the local 1990 freeze, he designed a special freeze policy for packing houses that is still written today.

Bill’s community service was vast and included serving on the following boards of directors: Exeter Chamber of Commerce, Exeter District Ambulance, Exeter Memorial Hospital, Exeter Re-Development Agency, and EUHS. He was appointed to the Tulare County Facilities Committee by Supervisor Bill Sanders, served as president of the Tulare County Economic Development Corporation, Badger Hill, and Harbor Cove HOA’s, and was a member of the Exeter Masonic Lodge 303. Additionally, he served as a Deacon at the First Presbyterian Church of Exeter, where he and Charlene were part of a group of parents who ran the Teens & Twenties Youth Group. He was a dedicated member of the Exeter Kiwanis Club for many decades and just completed his term as its most recent president. Bill was very honored to have been named EUHS Alumni of the Year in 2017.

Bill enjoyed snow and water skiing and taught his kids to become accomplished skiers as well. He also taught many others to enjoy water skiing. Additionally, fly-fishing, tennis and snowmobiling were favorite past times. Although Bill had the opportunity to travel to many points throughout the world and visit all 50 states, his favorite vacation spot was the family cabin in Mineral King. He enjoyed designing and remodeling several homes and side projects, along with woodworking. As a member of the Exeter Duck Club, he loved to hunt as often as possible during duck season and to work on the lodge’s projects. He also enjoyed the different fishing seasons in and outside of Monterey Bay in his Boston Whaler. He enjoyed attending several World Series, Super Bowls, Indy Car, and NASCAR events. His “Man Cave” parties were enjoyed by multiple generations of family and friends. Bill was a proud American who greatly loved our country and had great respect for our military and law enforcement officers.

Graveside services will be held at 10 a.m. on Wednesday, Oct. 7, 2020 at Exeter District Cemetery, with a Celebration of Life to follow. In lieu of flowers, the family would appreciate donations in Bill’s memory to the Exeter Kiwanis Club Foundation and Shriners Hospitals for Children (shrinershospitalsforchildren.org). Arrangements by smith family chapel, Exeter. Online condolences may be sent at SmithFamyChapel.com.