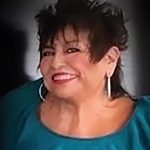 Gloria was born on June 23, 1940 in Exeter to Alex and Delores Torres. She attended Sequoia Union School and Exeter High School. Gloria spent countless hours volunteering at Sequoia Union School (PTA) while raising her only son Rick Navarro. Gloria loved to dance in her youth. It was said that people would come from all around to see her and her brother Arthur Torres do the Jitter Bug and dance the night away. Gloria loved to go to sporting events her son and grandchildren participated in.

She worked at Exeter’s Memorial Hospital in the 1960s and early ‘70s before she became a mother. Gloria later took that loving heart and quality of care and became a professional nanny to countless children that she loved very much. Every child had a special place in her heart. She would greet everyone with a smile and loved people just as they were. Gloria will be deeply missed.

She was preceded in death by her parents Alex and Delores Torres of Exeter; sisters Mabel Coffman and Angie Rivera; and brothers Alex Torres and Robert Torres.

Graveside service will be held at 10 a.m. on Feb. 11, 2021 at the Exeter Cemetery. Arrangements by Smith Family Chapel in Exeter. Online condolences may be made at SmithFamilyChapel.com.