Elbert Arthur Terry, better known as Sonny, passed away on March 16, 2021 on his family’s land in Visalia, Calif. He was born on June 20, 1931 in Hot Springs, Ark. to Arthur Elbert Terry and Mary Elizabeth Terry. 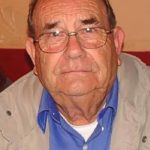 Sonny spent his early childhood in Arkansas and later moved to Visalia in 1941 with his family where they established Terryville Tent camps. In 1949, he joined the Army and served three years in Korea. When he returned from war, he married Opal in 1953. They soon had one daughter, Barbara Terry.

Aside from working, Sonny had many other passions such as hunting, fishing and music, specifically the guitar. He was also in a band for quite some time.

He was a kind, humble, well rounded man. Raised and passed in Terryville, his family’s land.

Graveside services will be held at 2 p.m. on Friday, March 26, 2021 at the Exeter District Cemetery. Bereavement lunch to follow.

Condolences may be sent to the family at www.evansmillerguinnchapel.com or Tulare County Obituaries at www.facebook.com/groups/2072945459676292. Services entrusted to Evans Miller Guinn Chapel.