Rose Marie Rodriguez (Shepard), loving mother, grandmother, and greatgrandmother peacefully entered into eternal glory with her Lord and Savior at the age of 81 on Tuesday, Jan. 12, 2021 following a short illness. 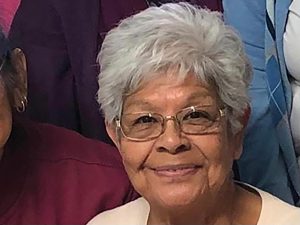 Rosa was born on Nov. 27, 1939 in Wasco, Calif., to Senon and Maria de Jesus Alvarado the ninth of eleven children. Rosa learned at an early age the value of hard work and the importance of family as she attended schools in Kern County while assisting her family in strenuous migrant work in order to provide for the family.

By the late 1950s the family had moved to Los Angeles, Calif., where Rosa met and married Gerard (Jerry) Shepard from New York and proceeded to raise a family. But unfortunately, his untimely and tragic death in 1965 left her alone with their young children to care and provide for. Rosa’s love for her children, Mary Ellen (Casey) and Frank drove her to work several jobs in order to provide as she raised and cared for them solely. Her passion and love for children led her into the education workforce and eventually into becoming a teacher’s assistant in the Porterville Unified School District, where she would eventually retire from many years later. In later years she was able to connect and share her love with her daughter Elizabeth Villa of Arizona who had been put up for adoption shortly after birth. Throughout her life as a single mother and sole provider with limited resources she led her children by her example of true generosity to others in need and un-biased love to those around her at every possible opportunity. She was always present at every special event her family and friends participated in, spreading her love and encouragement to everyone and always serving in preparations and cleanup. Her sharp wit and tremendous humor were always a staple of her personality for everyone she met, whether it was beating someone at scrabble or sitting around the table in laughter, love and joy surrounded her at all times. She enjoyed sewing and preparing individualized “special” clothes for her grandchildren and great-grandchildren. She additionally had a passion and gift for cooking that was renowned. She used her skills in the kitchen to bless those around her and passed that legacy onto her daughter, daughter in law, granddaughter’s and even great-grand daughters over the years. Nothing in life was as important to Rosa as her Savior, Jesus Christ, and her family and love for them. She was blessed to meet Robert Rodriguez of Lindsay, Calif., through her local church where they would wed in January of 2002. She enjoyed seventeen wonderful years married to Robert and graciously spread her love to the Rodriguez’s family and friends throughout and after Robert’s passing in 2018. Her legacy and love to those blessed enough to call her family will continue for many generations, as will her impact on all those that knew her.

Rosa is preceded her in death by her husbands, Jerry Shepard and Robert Rodriguez; parents, Senon and Maria de Jesus Alvarado; as well as her brothers, Tony, Joe, Jesus, and Angel Alvarado.

She is survived, loved, and remembered by her children Casey and Steve Sarr, Frank and Hattie Shepard, and Elizabeth Villa; her children by marriage, Robert Jr. and Christy Rodriguez of Lindsay; in addition to nine grandchildren, and twenty-nine great grandchildren; along with her siblings, Lupe Noyes, Juanita Ynigues, Pete Alvarado, Lucy Herrera, Mary Ellen Lawler, and Frances Harris; and sister-in-law Penny Dieffenbach.