Erma Lee Edwards a strong, confident, loving mother and long-time friendly face in Exeter, Calif., went to be with the Lord on Wednesday, April 7, 2021. She lost a battle with cancer that she fought on her own terms. She was born on Oct. 15, 1939 in Houston, Mo. She was 81 years old. 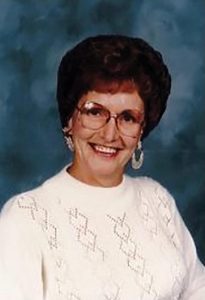 Erma was the daughter of Wrietha and Buck Upton, both deceased; the family moved to the Central Valley when she was 7. She was a graduate of Exeter Union High School. As a young woman she was a popular waitress at Carl’s Diner and later became a much-loved checker at Nickel’s Payless grocery store until retirement. Erma loved helping people in need, and was a strong, powerful, determined single mom in an age where women like her weren’t given the same breaks as single men.

Erma was baptized at 8 years old in the Exeter Church of the Nazarene and more recently in the bathtub of her long-time Exeter home.

Instead of flowers, Erma would appreciate memorials go to The Exeter Church of the Nazarene. Service time and dates are pending.